Furious Judge Repeatedly Dresses Down Kyle Rittenhouse Prosecutor: ‘I Don’t Want to Have Another Issue’ 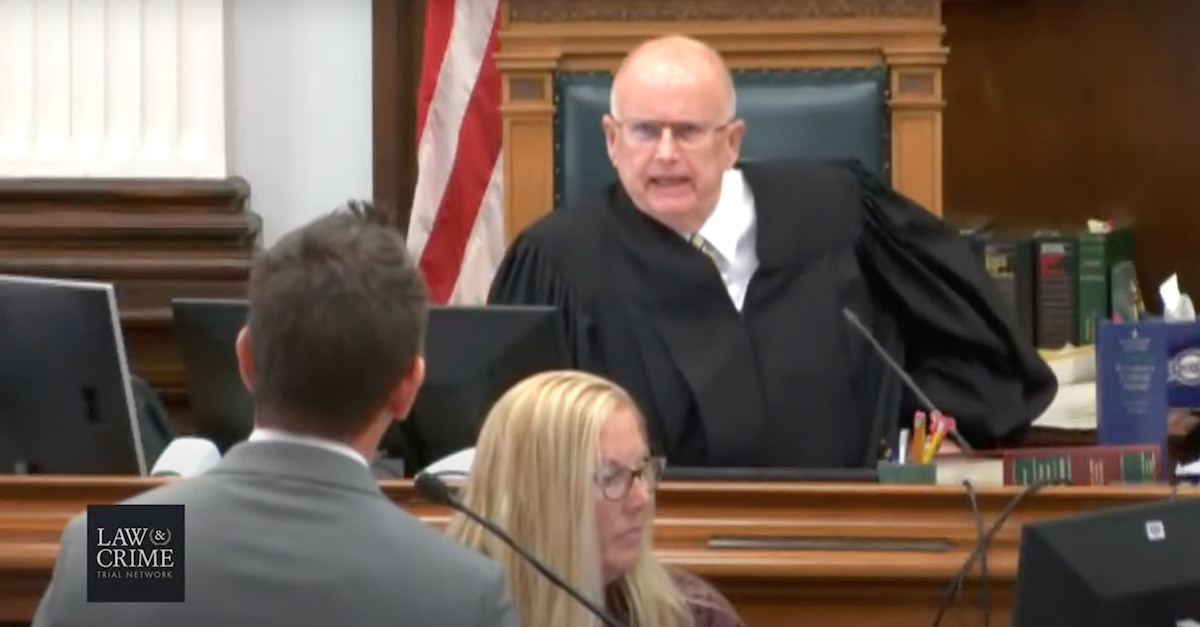 The judge overseeing the Kyle Rittenhouse intentional homicide trial screamed at the lead prosecutor over two issues which occurred during the cross examination of the defendant himself.

The berating occurred after the lead prosecutor, Assistant District Attorney Thomas Binger, attempted to ask Rittenhouse if he was using his AR-15-style rifle to protect property rather than human life.

“I ask the court to strongly admonish him, and the next time it happens, I’ll be asking for a mistrial with prejudice,” Richards said. That would prevent the state from re-prosecuting the case.

The judge dismissed the jury and started screaming at Binger when the lead prosecutor suggested the court “left the door open” for certain lines of questioning — including the line of questioning he elicited from the defendant.

“For ME, not for YOU,” Judge Bruce Schroeder said with reference to the door being left open. The judge raised his voice at the prosecutor in a scolding manner.

Watch the lengthy exchange below

Schroeder has consistently refused to rule clearly on issues when they have been presented or raised throughout the trial. Rather, he has expressed a penchant for ruling on matters in the moment when they come up. That can cause problems, as the unfolding scene in the Kenosha courtroom portrayed.

What followed was a lengthy verbal barrage aimed squarely at the prosecutor whose tactics have elsewhere caused or exasperated significant problems with the high-profile case.

After accusing Binger of entering a line of questioning “without any advance notice” — and in spite of the judge’s previous statement that he had a “bias toward denial” against the prosecutor on the issue at hand — Schroeder tore into Binger for commenting on Rittenhouse’s silence to the authorities.

“I was astonished when you began your examination by commenting on the defendant’s post arrest silence,” Schroeder said. “That’s basic law. It’s been basic law in this country for forty years, fifty years. I have no idea why you would do something like that. It gives, um, well, I’ll leave it at that. So, I don’t know what you’re up to.”

Binger, keeping his cool against the dressing down, said he filed an “other acts” motion to allow him to bring evidence to the jury suggesting Rittenhouse wished he had been able to use his rifle to defend property rather than human life on a previous occasion. Back then, on Aug. 10, 2020, Rittenhouse didn’t have his gun but expressed that he wished he had.

“Even if you’re correct,” Schroeder said, “you should have come to the court and said, ‘I want to go into this.'”

“Your honor, there have been things in this case, testimony in this case, that I believe opens the door to this,” Binger said. “For example, the defense has introduced evidence that the defendant pointed a gun at a man wearing yellow pants because that person was on a car on the Car Source lot. Now, there is no justification that I can think of why the defendant would point that gun at someone. The defendant has just testified this morning that he agreed with that person in the yellow pants that he pointed the gun at him. He said, ‘I was joking when I said that to the guy in the yellow pants,’ but he said — he’s acknowledged — that he told the person in the yellow pants, ‘Yeah, you’re right, I did point a gun at you when you were sitting on a car.'”

Rittenhouse’s defense attorneys kept shaking their heads in disagreement; Binger asked if he could make a record of the issue without being interrupted.

Schroeder balked at the point the prosecutor was trying to make because Rittenhouse didn’t have his gun on Aug. 10, 2020 and therefore couldn’t have attempted to defend property with his gun.

“You know, it’s interesting, Your Honor, because the entire defense theory in this case is that Joseph Rosenbaum . . . ”

The judge cut him off. Binger asked to make a record of his point without being interrupted.

“I believe that there is a central part of this case that Mr. Rosenbaum is making threats that he has no ability to carry out,” Binger said. “One aspect of why you don’t believe it’s relevant is the defendant didn’t have the gun with him [on Aug. 10]. This case is about someone who didn’t have a weapon. And, yet, the jury is being told because of those threats, that means the defendant has to defend himself. So, with all due respect, your honor, mere verbal threats have already been shown to this jury and used as a basis for someone’s subsequent actions. I am attempting with the defendant to use his mere verbal threat on Aug. 10 — fifteen days prior — that he is going to shoot shoplifters with his AR-15 to impeach the defendant in a murder trial.”

Binger admitted he “probably” should have asked the judge if he could employ the line of questioning he did, indeed, employ; however, he said that the trajectory of the trial indicated that the topic was increasingly relevant and that the judge’s previous position on the matter didn’t squarely address what had transpired. He reiterated that Rittenhouse “admitted pointing a gun at someone who was merely jumping or sitting on a car.”

“The door is open now to this testimony,” Binger said. “I continue to believe that his state of mind, his intent, his belief as to self defense is the core of this case.”

Binger again pointed to the lack of finality from the court’s original ruling on the issue. He acknowledged the judge was “strongly inclined” against such testimony in the past but that it was now “relevant.”

Richards shot back that the situation was “ridiculous.” He said at one point he had to “whisper” in the ear of second-chair prosecutor James Kraus not to tread in a certain area of questioning because of a previous ruling.

Schroeder told Binger that the evidence he sought to introduce was excluded as propensity evidence under Wisconsin Rule of Evidence 904.04.

The rule generally forbids character or propensity evidence but allows it to be used in several ways. For instance, “evidence of other crimes, wrongs, or acts” is generally barred from trials because the law seeks to convict defendants based on their alleged actions currently at bar — not based on whatever they’ve done wrong in the past. But the law does allow such “evidence when offered for other purposes.” It gives a non-exhaustive list of what those “other purposes” might be, such as “proof of motive, opportunity, intent, preparation, plan, knowledge, identity, or absence of mistake or accident.” It doesn’t directly list “impeachment,” but Wisconsin courts have suggested that impeachment is one permissible reason to use such evidence.

“You’re talking about his attitudes?” Schroeder said. “His attitude is he wants to shoot people. Now, I’ve admitted that kind of evidence in other trials when it’s been appropriate. I didn’t admit it in this case because to me, what I’ve heard . . . nothing in this trial to change any of my rulings.”

“That was before this testimony,” Binger appeared to say — referring to Rittenhouse’s comments on the stand.

“DON’T GET BRAZEN WITH ME!” Schroeder yelled. “Don’t give me that!”

“I see no similarity between talking about wishing you had your AR gun, which you don’t have, so you could . . . fire rounds at these thought-to-be shoplifters and the incidents in these cases,” Schroeder said. “There’s nothing in your case that suggests the defendant was lying in wait at somebody or reflecting on the shooting for a vast amount of time. Every one of the incidents involved seconds in time.”

Schroeder mischaracterized the state’s case but was not corrected about his assumption. The state’s case is that Rittenhouse was the initial aggressor whose actions goaded those he shot.

“Check the authorities,” the judge shot back at Binger. “Read more on evidence.”

He then returned to the “well known rule” that he said Binger crossed when commenting on Rittenhouse’s silence.

“I’m astonished that that would have been an issue,” Schroeder told Binger. “I don’t want to have another issue as long as this case continues. Is that clear?”