Kyle Rittenhouse ‘Was a Cadet’ Who ‘Had the Best Thoughts at Heart’ When He Entered Kenosha, Jury Consultant Says 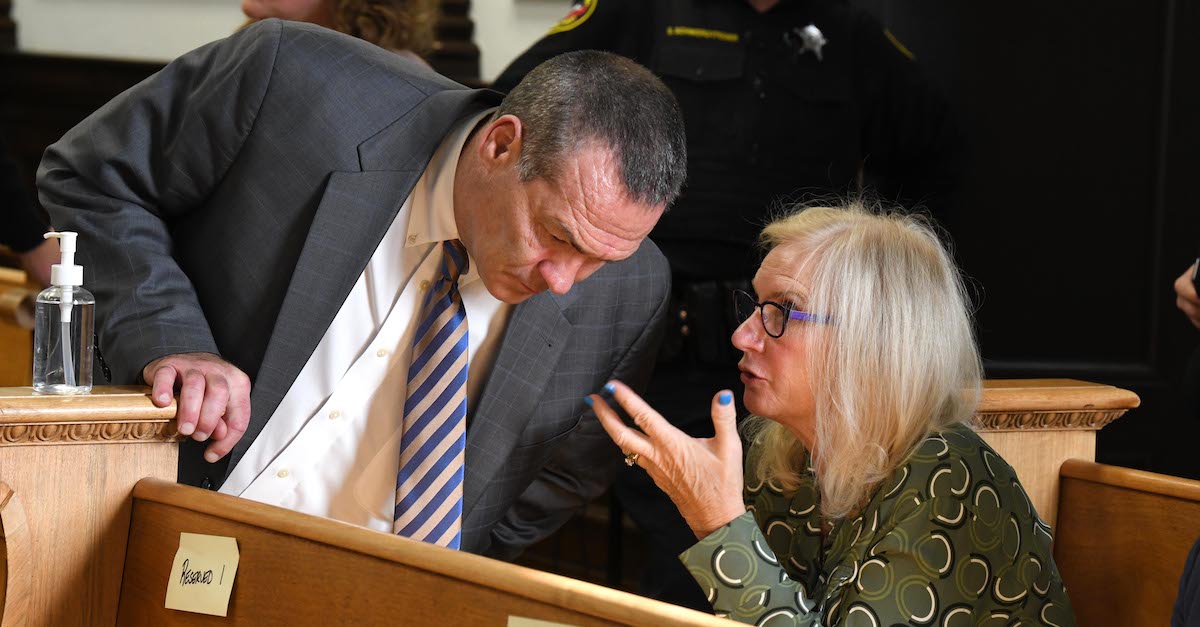 A high-profile jury consultant to Kyle Rittenhouse on Friday said that she believes the acquitted Kenosha shooter’s “mind” and “desire that night was in the right place” when he entered the fray on Aug. 25, 2020, with a medic’s pack and an AR-15 rifle.

“Maybe he went about it the wrong way,” the consultant immediately noted.

Jo-Ellan Dimitrius, who has been employed by Rittenhouse’s defense team since July, granted an extended interview to Law&Crime shortly after Rittenhouse was acquitted of first-degree intentional homicide and other charges in connection with the deadly events in Wisconsin that catapulted Rittenhouse into a rancorous and at times furious debate about guns, self defense, and racially charged protests that engulfed the country last year. Jurors agreed with Rittenhouse’s defense that the teen killed two people and injured a third in self defense because he was being attacked.

Dimitrius, whose connection to the case was first reported by Law&Crime on Nov. 10, described Rittenhouse in these terms:

I think that people should know that — I believe in my heart and hearts — his mind and his desire that night was in the right place.  Maybe he went about it the wrong way.  This young man . . . had the best thoughts at heart for cleaning up Kenosha after the horrific events of the previous days.  He did have some first aid training, he was a lifeguard — his heart and head were in the right place.

When questioned by Law&Crime about Rittenhouse’s tactics and associates — specifically, his association with militia members or alleged Proud Boys — Dimitrius suggested that Rittenhouse was pulled into something he did not fully vet or expect:

People who are in a paramilitary organization — arguably, law enforcement is [as well] — he was a cadet in that situation.  There is a tendency to gravitate toward something like that.  He was 17 years old at the time.  Whether or not he comprehended the extensive background of the people who showed up, how they showed up, what their background was, I don’t know.  I do believe he had his heart in the right place and that he brought his weapon with him as a deterrent factor and as safety for himself.

Dimitrius said that despite her usual title as a “jury consultant,” she was largely hired by Rittenhouse’s defense team to help determine whether Rittenhouse should take the witness stand. She said the determination was “a consensus by the entire trial team.”

Dimitrius previously worked for O.J. Simpson’s defense team and has since been involved with seemingly countless high-profile legal matters.  She boasts a resume containing more prominent clients than perhaps most attorneys. 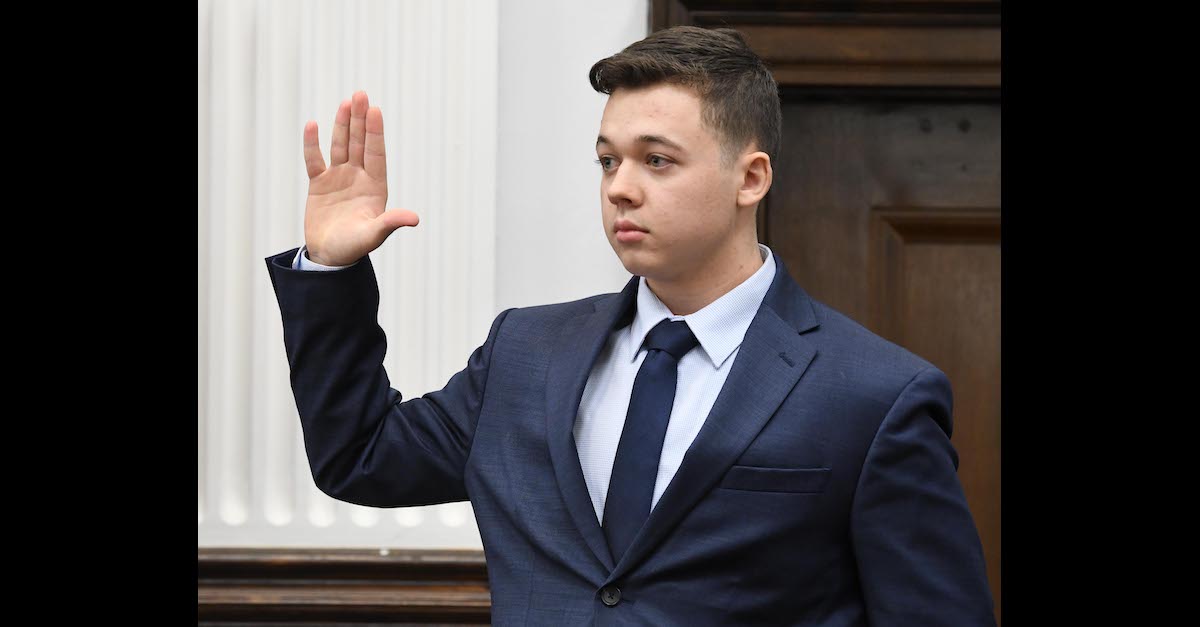 “My job — the way that I look at my job — is as a supplemental expert,” she said. But she added that “the whole team gelled and had the same mindset.”

Rittenhouse had to testify, the team concluded, “because he was the only one that could talk about what was going through his mind and what was happening” when he pulled the trigger — and in the points leading up to it.

She was referring to the men Rittenhouse shot. Joseph Rosenbaum and Anthony Huber were killed; Gaige Grosskreutz’s bicep was “vaporized,” as he put it.

In a piece published at approximately the same time Law&Crime was talking to Dimitrius, defense attorney Richards told the New York Times on Friday that the defense conducted mock trials — one including Rittenhouse’s testimony, one without it — to determine that the case was much better for the defense with Rittenhouse on the stand.

“Mock juries are an expense and a luxury most defendants cannot afford,” celebrity attorney Lisa Bloom retorted on Twitter while citing the Times piece.  “Who paid for this?”

Richards later told CNN that “there’s too many guns in our society” and that he wished “our society wasn’t perceived as being so dangerous that people needed to arm themselves.”  He said Rittenhouse regrets going to Kenosha that night “a hundred times over” but added that his actions were not illegal. 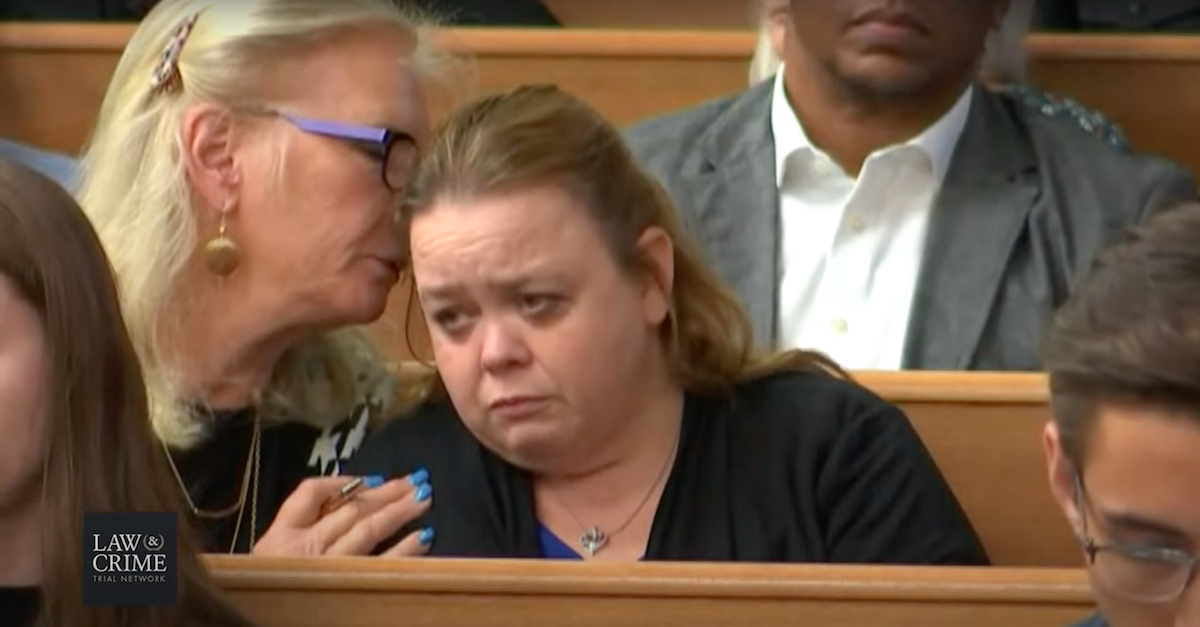 Jo-Ellan Dimitrius speaks into the ear of Wendy Rittenhouse on the afternoon of Wed., Nov. 10, 2021, as prosecutor Thomas Binger asked Kyle Rittenhouse what was occurring when he shot Joseph Rosenbaum. The cross-examination focused on video of Rosenbaum raising his hands split seconds before Rittenhouse fired. (Image via the Law&Crime Network.)

Dimitrius told Law&Crime that she agreed to join the defense team after reviewing all of the evidence and concluding, as did the jury, that Rittenhouse defended himself against attacks by others.

“I follow news of events such as this, and my knowledge base, like the general public, is simply what’s been out in the media,” Dimitrius said.  “But I also know from having worked these high profile cases, as Paul Harvey used to say, is that there is the ‘rest of the story.'”

Dimitrius said she put aside her own beliefs to examine the case file and video — the evidence.

“I want to see with a fresh eye ultimately what the jury will be presented,” she noted. She added that she was “fortunate” to have been retained “for the entire trial, not just jury selection,” because her longer employment allowed her to see a broader gamut of evidence.

She criticized prosecutor Thomas Binger for “changing the spectrum” of the case. She was referring to accusations that the state didn’t hand over high-resolution drone video to the defense. Prosecutors said that the footage was emailed, not sent through a Dropbox link, and that the file was accidentally compressed in the process.

“They were very poker faced,” Dimitrius said of the jury. “Out of the two weeks of trial, I saw two reactions. One was the reaction by one of the jurors when Mr. Rosenbaum’s fiancee was talking. She was very visibly upset and emotional. There was another reaction — actually during closings — by another juror when something was mentioned about Mr. Binger living in a fairy tale land. Other than that, that was it.”

Dimitrius said a female juror seated close to Rosenbaum’s fiancee shared a moment of “sympathy and empathy” with the fiancee as the witness recounted the loss of Rosenbaum. Dimitrius described both the juror and the witness as “emotional.”

The comment about Binger resulted in a laugh from another female juror.

Dimitrius said she was blocked from seeing the jury during lengthy portions of the trial by one of the courtroom’s video display monitors.

“My job is not only to listen to the witnesses, but also the judge,” she continued. “It’s also watching the prosecution stylistically — body language.  I take all of these factors into consideration.”

She explained that her job was to supplement the observations of the attorneys, who were oftentimes busy thinking about legal procedural matters and not about the broader drama unfolding in the courtroom.

“It is not mystical,” Dimitrius said of her processes of observation.

“I act as a thirteenth juror,” she said, “even though I have more of a knowledge base, because I’ve been working with the defense” long before the jury was seated. 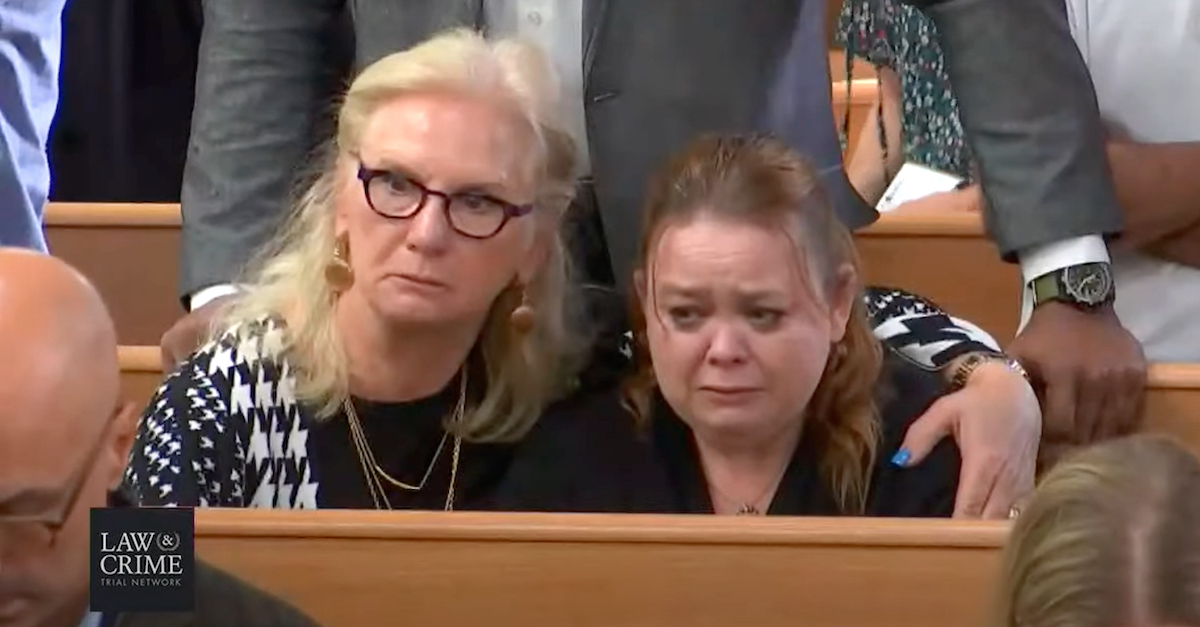 Dimitrius said she also objected to characterizations of her work as an attempt to choose a “perfect juror.”

“There is no such thing as a perfect juror,” she said. She said the court processes — the striking of jurors for cause or via a peremptory challenge — usually help guide decisions and make it difficult to find such people.

In the Rittenhouse case, Dimitrius said the jury selection process imposed by Judge Bruce Schroeder made it nearly impossible to probe deeply into the mind of each individual juror.

“This judge did not allow either side to utilize a juror questionnaire in advance of this trial,” Dimitrius said. “The judge only allowed an hour and a half a piece for each side during voir dire . . . the only information we had . . . was their name, their age, their area of residence, and their occupation. We had no other information, unlike some of the other big trials I’ve worked on.”

“It made it much more difficult,” Dimitrius said, to understand the jury. That included attempts to “do social media searches” of the jurors to see what they may have been saying about the events in Kenosha or about Rittenhouse. She noted that both the defense and the prosecution scoured the jurors’ social media platforms as best they could.

“There were many of our perspective jurors that we didn’t know anything about,” she said. “There really wasn’t a profile that was developed.  When we did our research, that really wasn’t the target of what we were seeking to explore. The actual component of the research we were asked to address was whether or not Kyle should testify.” 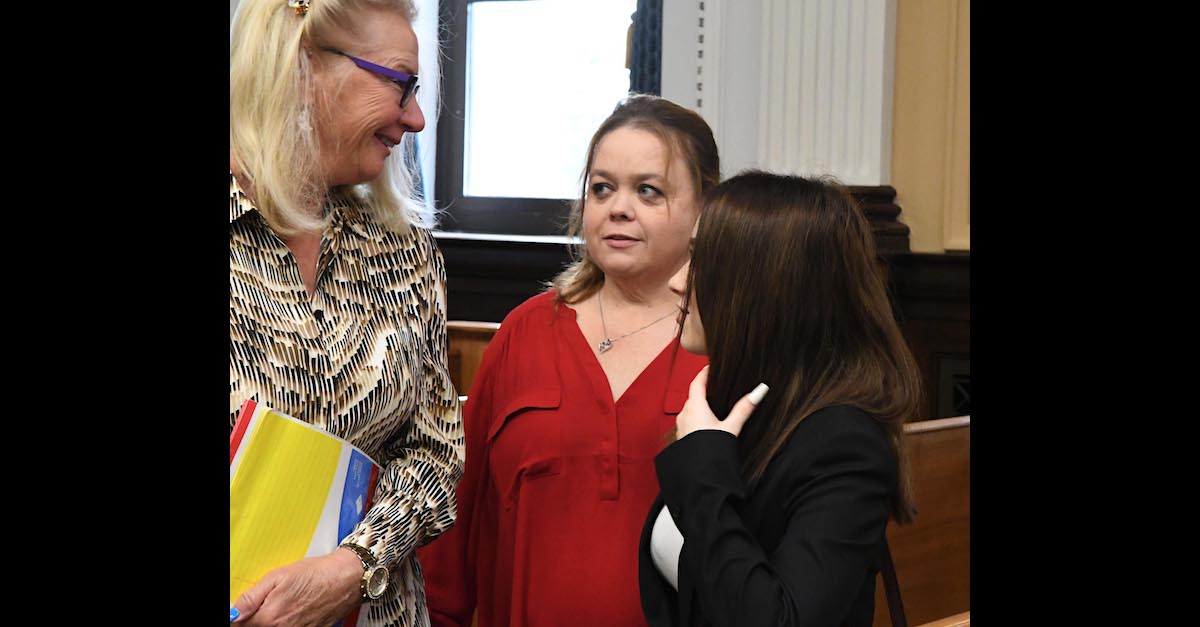 When asked about her interactions with Rittenhouse’s family, Dimitrius said:

I was very fortunate in that I did spend a lot of time with Wendy [Kyle Rittenhouse’s mother] and her daughters. She is a, essentially, a single mother, who I believe in my heart of hearts has done the best that she possibly can — and could — with all three of her children. She was a very concerned woman — very concerned about her son.  I enjoyed getting to know her and daughters. As well as, obviously, really getting to know Kyle.

Dimitrius said she did not discuss public criticism of the Rittenhouse family with Wendy Rittenhouse.

“I was there for her mental health, trying to focus on things somewhat unrelated to the trial, just to get to know her as a person, what she did for a living . . . how her life has been,” Dimitrius explained. “It was evident to me — just from the very beginning, as a mom — my heart was breaking for her.”

Dimitrius said “shadow jurors” — people who are employed to sit through trials if they were jurors and who report their observations to attorneys every night as cases progress — were not employed in the Rittenhouse trial.

On the trial as a whole and the vitriol that has surrounded it, Dimitrius concluded:

Hopefully what comes out of this one when the hubbub dies down is that people can calmly debate the outcome. I think this judge bent over backward to be transparent. We heard that word from him many times over the two weeks. I think his working with the jury was absolutely outstanding in protecting them. For me, I am a huge, huge supporter of the jury system and the system we have in the United States.  First and foremost, the jury, no matter what the outcome, should be protected, and people should not second guess how they came to their opinions. 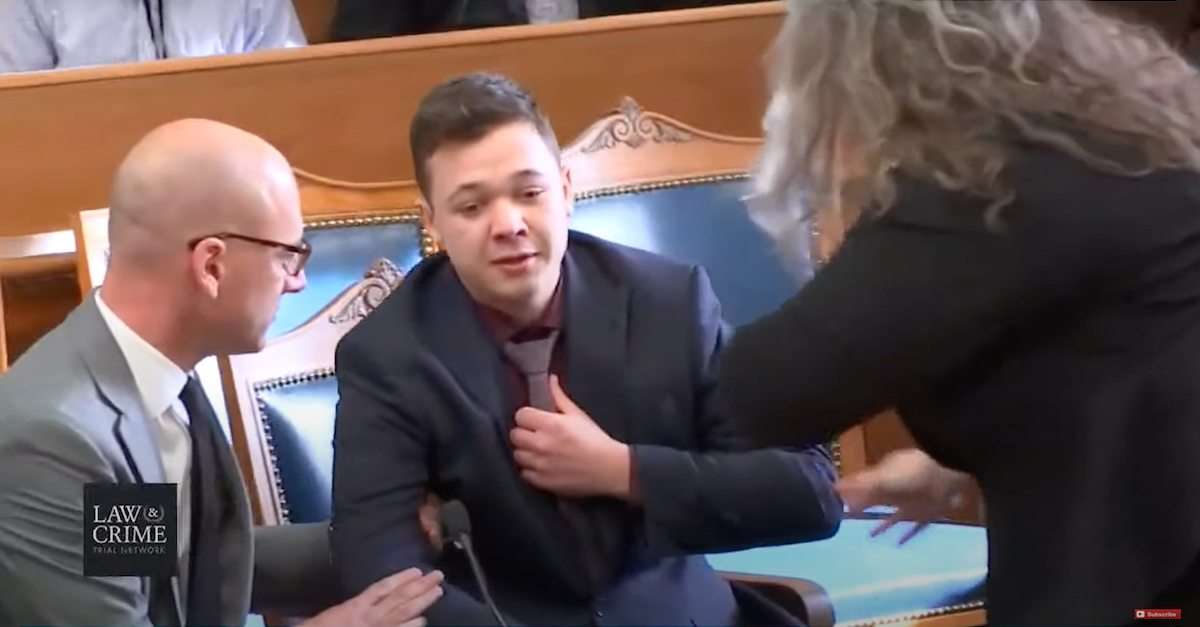 Law&Crime’s extensive coverage of the Rittenhouse case is here.

This piece has been updated with additional detail.