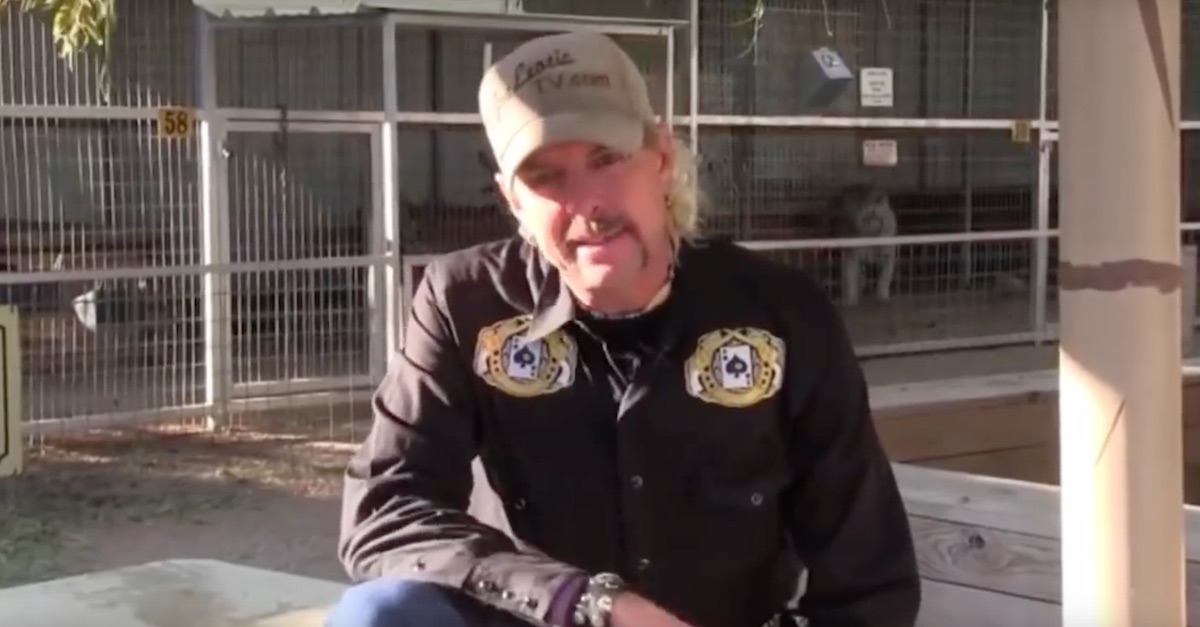 A lawyer for the convicted murder-for-hire plotter and Tiger King star known as Joe Exotic has confirmed that his client has prostate cancer and has been transferred to a federal facility for treatment.

Joe Exotic, whose real name is Joseph Maldonado-Passage, had announced his cancer diagnosis on Twitter in early November.

Doctors called me in today to break the news that my prostate biopsy came back with an aggressive cancer, Carole Will have her own party over this! Say a prayer everyone & be my voice 😢 love #joeexotic #exclusive #breakingnews #freejoeexotic #justiceforjoeexotic pic.twitter.com/M5wu7fI7a9

Attorney John Phillips confirmed the diagnosis in a statement Friday.

“Joe informed me that his fears were true. He had been diagnosed with prostate cancer,” Phillips said. “As noted in Joe’s recent statements, he has been undergoing medical treatment and tests for a host of issues. The PSA test is a blood test used primarily to screen for prostate cancer. It was high months ago. He finally obtained biopsies. They revealed two cancerous areas. He is undergoing further testing.”

Phillips said the transfer was supposed to occur later in November, and did not give a reason for the change in timing.

The Federal Medical Center in Butner, located in North Carolina, “has had its share of ‘celebrity inmates,’ including Bernie Madoff, although Joe shouldn’t be one of them,” Phillips’ statement said.

Phillips added that he and Maldonado-Passage had hoped for a transfer to Oklahoma, so he can “prepare for his re-sentencing and upcoming Motions to overturn his conviction.”

Maldonado-Passage was convicted in 2019 of selling a liliger cub to fund the murder of Carole Baskin, his “big cat” rival and self-described animal activist.

In January 2020, Maldonado-Passage was sentenced to 22 years in prison for the murder-for-hire plot, illegal animal trafficking, and animal abuse.

However, in July, the 10th Circuit U.S. Court of Appeals vacated his sentence, finding that the lower court erred in not grouping the two murder-for-hire charges together, even though Maldonado-Passage was convicted of trying to hire two different men to kill Baskin.

The appeals court affirmed Maldonado-Passage’s conviction, but he is likely to serve less time upon re-sentencing.

That might not be enough to help his client, Phillips said.

“[P]rison medical care isn’t the best and justice is slow. It’s a competition of life and liberty no one wants any part of,” Phillips’ statement said. “The last few years has taken everything from Joe Exotic-his property, his freedom, his husband sold his clothes, his parents have passed away and now he faces cancer. Please keep Joe in your thoughts and prayers.”

Both Maldonado-Passage and Baskin gained notoriety after the release of the Tiger King documentary series on Netflix in March 2020. Netflix has recently released new episodes under the title Tiger King 2.

Baskin and her current husband Howard Baskin have sued Netflix and the production company behind Tiger King, alleging that they were misled as to what the series would eventually become.

According to the lawsuit, the Baskins were led to believe that the project was intended as a “single documentary feature film that would be an exposé of the big cat breeding and cub petting trade[.]” Instead, according to the complaint, Tiger King became a “soap opera-esque drama” that pushed a “pernicious … over-arching implication” that Baskin was involved in the disappearance and presumed death of her first husband, Don Lewis.

In an update to Maldonado-Passage’s ongoing legal case, Phillips declared a recent victory regarding the witness affidavits.

“Joe’s legal team filed motions under seal, so the witnesses and public could not see some of the more delicate parts of the investigation,” Phillips’ statement said. “The Department of Justice requested they be unsealed even though they had full access. Yesterday, the court ruled in Joe’s favor.”