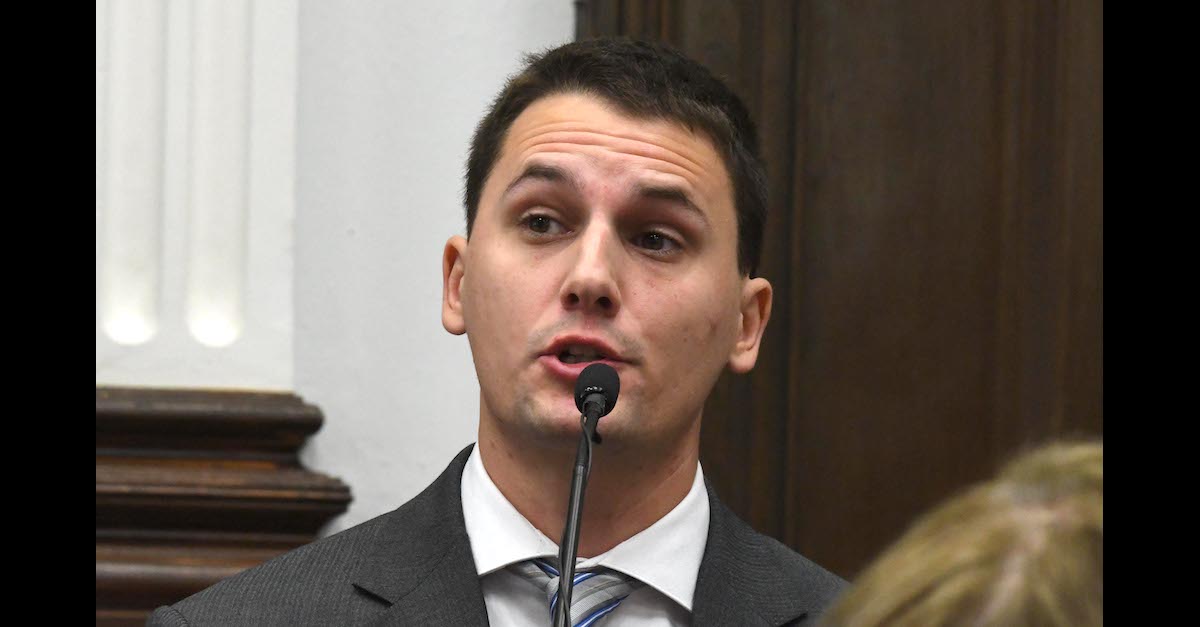 A man who served as a U.S. Marine Corps infantry rifleman testified Friday morning that he traveled from his home elsewhere in Wisconsin to help reported “Boogaloo Boi” Ryan Balch deal with unrest in Kenosha, Wis., shortly before Kyle Rittenhouse shot and killed two people and injured a third person.

“I saw the community in trouble, and I wanted to come help any way I could,” Lackowski said under direct examination by lead prosecutor Thomas Binger. “It was to protect local property . . . just to make sure nobody would come and harm the property that we were supposed to protect.”

The witness said he was “trained to shout, shove, show, shoot.”

“What does that mean?” Binger asked.

“You shout, you shove, you show your firearm, and you shoot,” Lackowski responded.

The former military man added that he was carrying an AR-15 rifle loaded with 28 rounds. He said the full magazine carried 30 rounds. He also had a knife and a CS gas canister, the latter of which he described as a more powerful version of tear gas.

“When I came down, I linked up with Ryan; he brought me around to our, I guess, our area of occupation — which is where we were originally supposed to just protect. He introduced me to everybody that was there. I couldn’t really tell you most of their names because it was in one ear and out the other. I took my post, and that was it.”

He testified he assumed a post on the northeast corner of a car lot after first saying he was on the southeast and then the southwest corners of the lot — admitting his sense of direction was “off.”

Lackowski said things became “chaotic” when the police started shoving protesters toward the lot the men were guarding. At one point, he said Rittenhouse helped a woman who injured her ankle. He described “polite conversations” with several protesters and that he generally succeeded in keeping them off the car lot.

“You had the actual protesters, and you had the a-holes that were trying to use the protest at their own game.”

“You’re in court,” the judge said.

He continued by saying there some individuals who were not part of the core protester were “instigating” and “cause havoc,” including “throwing things at police” and “people starting fires.” Some tried to set fire to a car in the lot; those individuals threatened to “come back and burn down” the facility. Five or ten minutes later, he testified, the group “started throwing rocks at us.” Lackowski said the conversations were “vulgar.”

Binger asked Lackowski whether “shouting” was enough to deal with the issues on hand.

“He said he was an EMT,” Lackowski said of Rittenhouse.

“I assumed he was 18,” Lackowski said. “In the State of Wisconsin, you have to be 18, I believe, in order to have your EMT license, and he was carrying a firearm.”

“Was one of the reasons you assumed he was 18 the fact that he was carrying a firearm?” Binger asked.

The defense objected; Judge Schroeder allowed the witness to testify as to what he thought the law explained.

“You have to be 18 to order to buy a firearm — a long gun in Wisconsin,” the witness said. 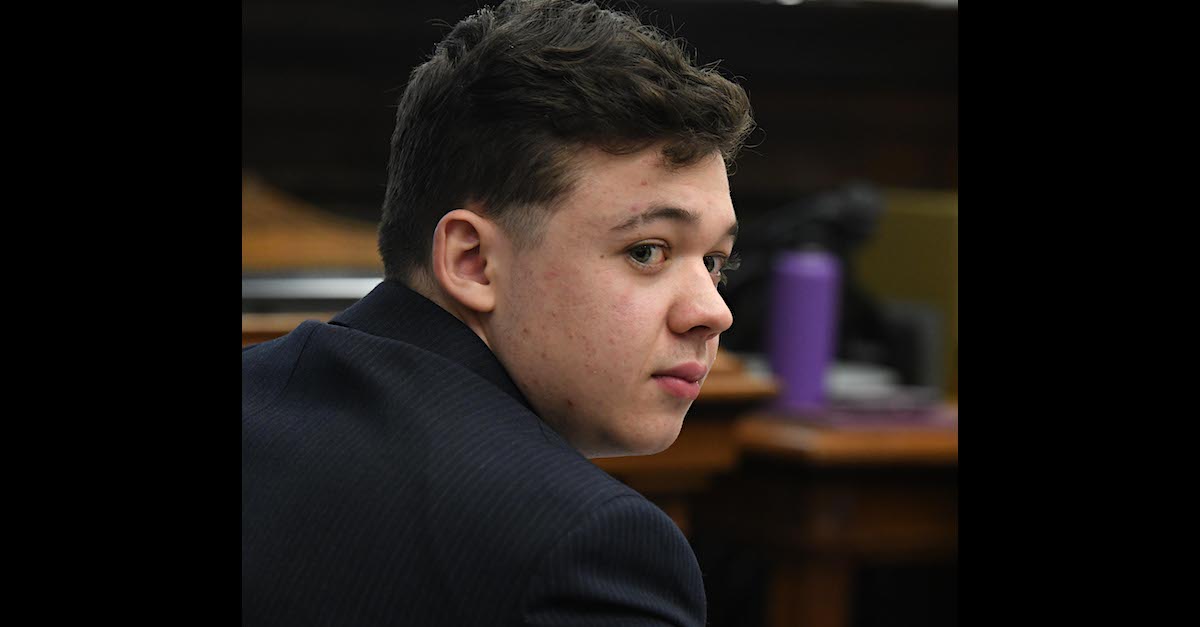 Kyle Rittenhouse sits in court on Nov. 5, 2021, during his murder trial in Kenosha, Wis.

Lackowski said he didn’t consider Rosenbaum a threat. He also said he never saw Rosenbaum with a weapon of any type. But later, he said his “banter” — the requests to be shot and the “false stepping” — was concerning.

Binger asked Lackowski to demonstrate the “false stepping” for the jury. Lackowski said Rosenbaum made the motions toward others who were guarding the car lot but wasn’t sure if he made those motions toward Rittenhouse directly.

Eventually, Lackowski said he heard gunshots, so he started to run down the street. After running, he encountered Rittenhouse again. Rittenhouse “ran from” a different car lot to join him. Rittenhouse appeared “frazzled” and “shocked,” the witness said.

Rittenhouse indicated he “needed help” but “did not shoot anybody,” according to Lackowski.

But he changed his story later on cross-examination.

Lackowski pointed the defendant to the police “down the road.”

Lackowski said he blacked out. He next recalled seeing Gaige Grosskreutz shot. He said someone who applied a tourniquet did so improperly; he remedied the matter and waited for the police to arrive. Someone pointed out that a gun was nearby; Lackowski said he picked up the gun, disarmed it, and put it down when the police told him to do so.

Later, on cross examination, Lackowski agreed that the gun was “ready to be fired.” He also agreed that an image presented by the defense appeared to show Grosskreutz handling the weapon before he found it. 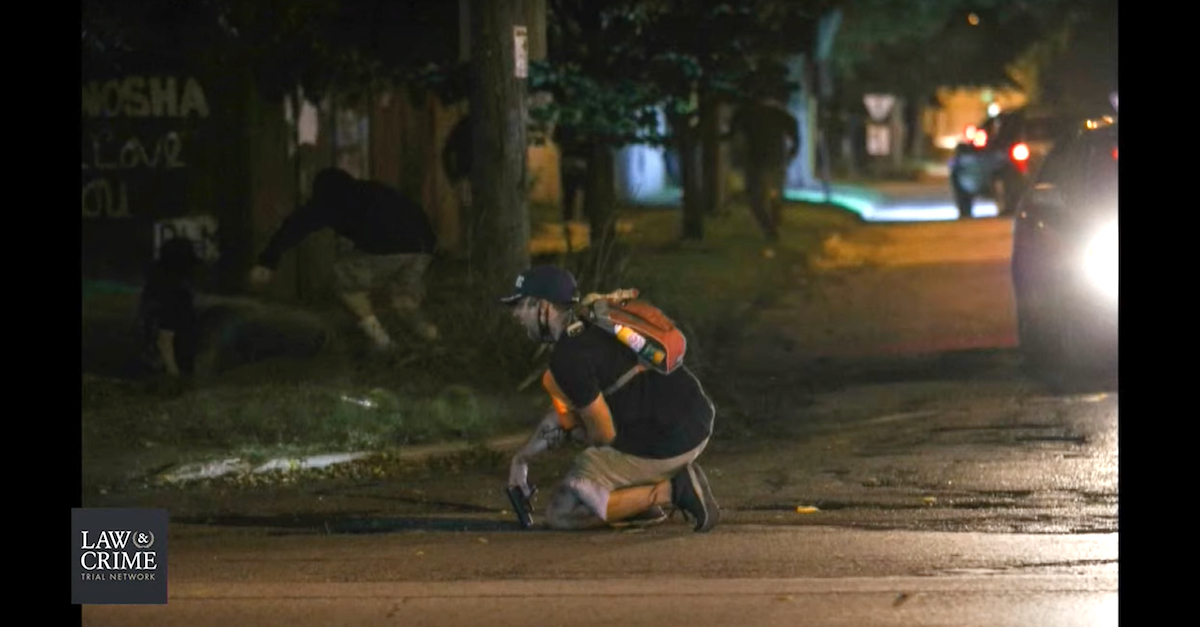 A man identified as Gaige Grosskreutz appears in an image presented by the defense to witness Jason Lackowski on Nov. 5, 2021 in the Kyle Rittenhouse murder trial. (Image via the Law&Crime Network)

Lackowski said he attempted to extinguish a vehicle fire but that a fire extinguisher was spent; he said he and others moved other cars away from the fire to prevent it from spreading.

The witness also said he reencountered Ryan Balch at some point.

He said reporters were present nearby but that he attempted to avoid them. Lackowski said several of the reporters initially suspected he was the shooter because he, like Rittenhouse, was carrying an AR-15 and was wearing a green shirt. He said he eventually was told by the reporters that the shooter was from his group; he said he didn’t volunteer Rittenhouse’s identity.

During cross-examination, Lackowski said “run away” and “retreat” are not part of his “shout, shove, show, and shoot” training.

Defense attorney Corey Chirafisi asked Lackowski to revisit his testimony about whether Rittenhouse did or did not claim to have shot anyone.

“The statement that makes more sense is — ‘I did shoot somebody and I need help,'” Chirafisi wondered. “Right? Why would you need help if you didn’t shoot someone?”

“I’m not being critical,” Chirafisi continued. “How certain are you that he, in fact, didn’t say, ‘I did someone and I need help’?”

Upon further questioning, the witness said he didn’t fire his own weapon on Aug. 25, 2020, because no one attacked him.

The full testimony is online courtesy of the Law&Crime Network.