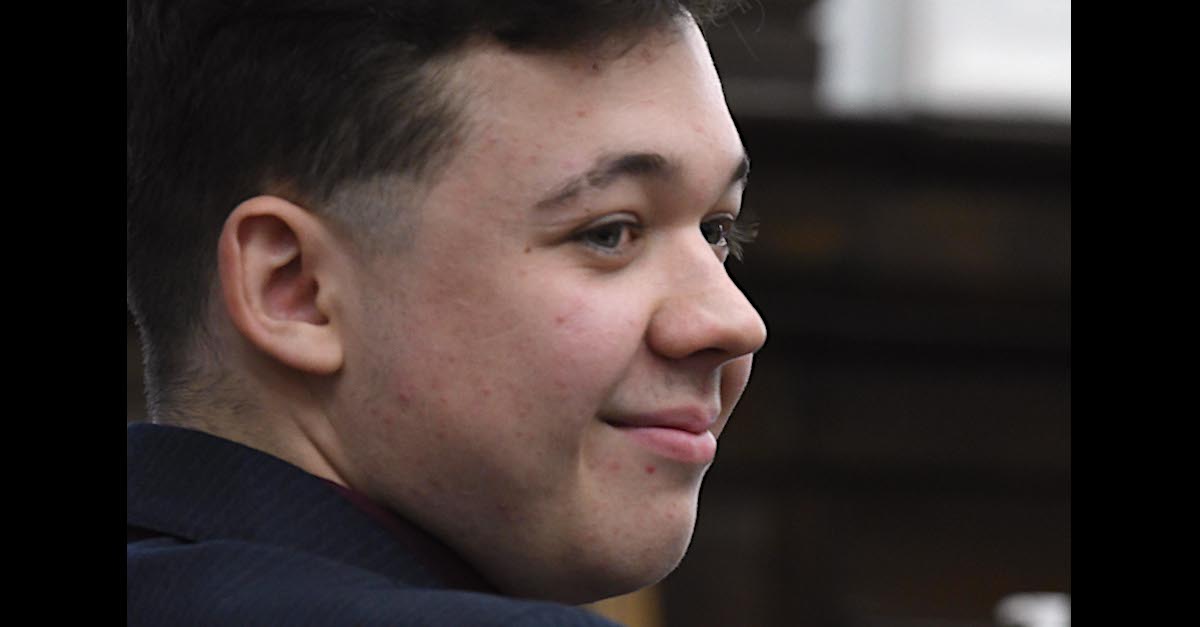 During opening statements on Tuesday, a defense attorney for Kenosha, Wis. shooter Kyle Rittenhouse characterized the teen who killed two people and injured a third during civil unrest in the summer of 2020 as someone who pulled the trigger only after others attacked him “in the street like an animal.” The defense also said Rittenhouse only fired his weapon after directly receiving “flat out threats” that he would be murdered by the first person he shot.

The defense — as predicted — characterized the entire episode as one of self defense.

“Ultimately, what this case will come down to — it isn’t a whodunit, when did it happen, or anything like that,” defense attorney Mark D. Richards said. Rather, it came down to a question of whether Rittenhouse’s actions were “privileged” under Wisconsin law, he said.

Richards started his arguments by characterizing Rittenhouse as a local. 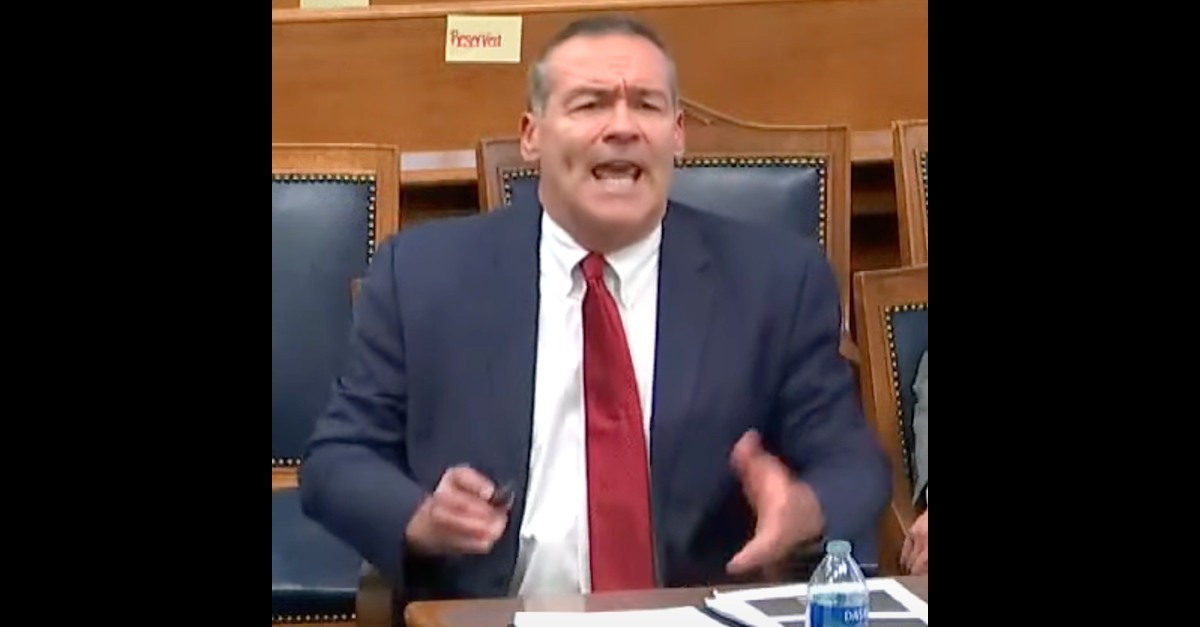 Defense attorney Mark Richards became animated while making a point outside the presence of the jury. (Image via the Law&Crime Network.)

“In spite of what the media and public statements and things like that have been, the evidence will show that Kyle Rittenhouse had strong ties to Kenosha,” Richards said. “His mother lived in Antioch, Ill. Kyle worked here in Kenosha County at the RecPlex in Pleasant Prairie as a lifeguard.”

The defense attorney said Rittenhouse “met other individuals who had come to town at the urging of websites and things like that and then — just a general, I would say, distaste for the destruction.”

Richards said the mission turned from one of property protection into one which required Rittenhouse to fight for his life.  He also characterized Rosenbaum as the initial aggressor. He described Rosenbaum as the man who “is ultimately the individual who lit the fuse that night.”

“Mr. Rittenhouse was the only person who was chased by Joseph Rosenbaum,” Richards said.

Richards showed a picture of Rosenbaum and pointed out his “baggy” jeans to the jury. He said Rosenbaum “became enraged” when a dumpster Rosenbaum helped light on fire was extinguished by others — and that his anger was not quenched until he was dead.

“He’s upset, and he’s yelling that he wants to be shot,” Richards said. The defense said Rosebaum was at one point “armed with a chain” and had set a trailer on fire before confronting Rittenhouse.

Prosecutors had earlier said that Rittenhouse helped extinguish a fire in a dumpster.  Law&Crime fully covered the prosecution opening statement in a separate report. 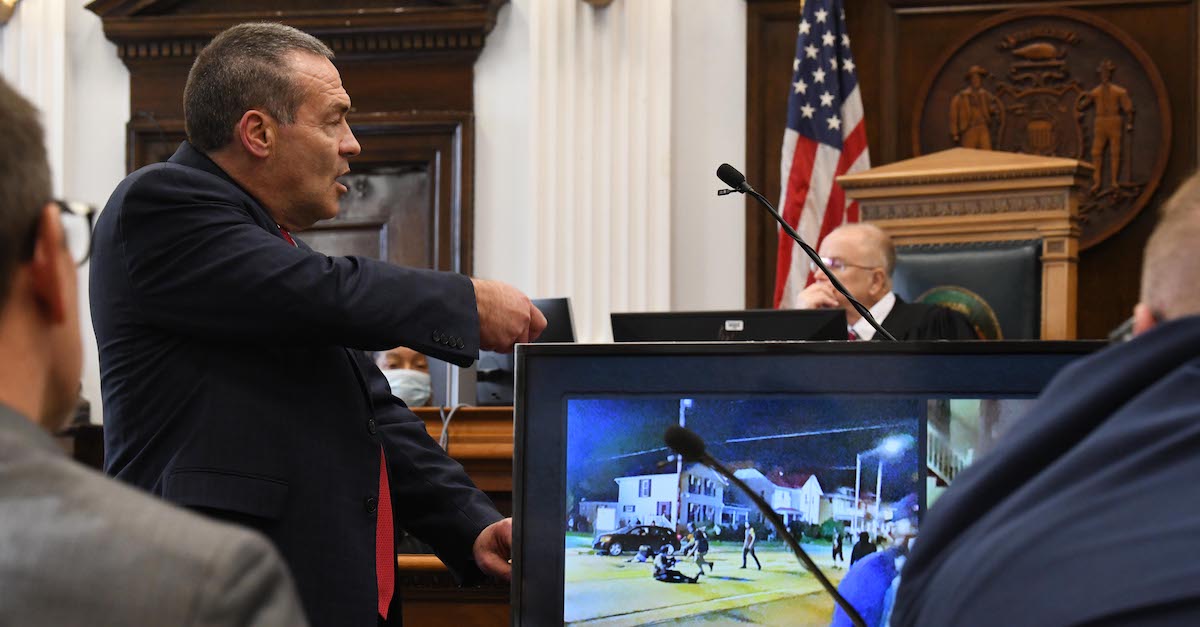 Richards said Joshua Ziminski, 35, “fired the first shot” on Aug. 25, 2020 — and that the gun was fired “behind” Rittenhouse as Rosenbaum was chasing the defendant. Rosenbaum was “not deterred” by that gunshot, Richards said.

At one point, Richards called Gaige Grosskreutz, 26, a “victim” of the shooting — despite the judge ordering the prosecution not to use that word.

“Or, excuse me, the complaining witness,” Richards corrected himself. “I apologize.”

Richards said the people around Rittenhouse were armed with items that could easily become deadly weapons.  He claimed one person carried a flashlight for no reason other than to use it as a weapon.  He said a skateboard was an item someone could use to try to “separate the head from the body.”  Another witness carried a chain, he said.

The prosecution objected to some of the characterizations.

The defense returned most of its focus to Rosenbaum.

“If I get either of you two alone, I’m going to kill you,” Rosenbaum allegedly said to Rittenhouse and to companion Ryan Balch, Richards said.  The defense attorney characterized Rosenbaum’s words as “flat out threats to murder.”

Richards didn’t mention that Balch was a reported member of the “Boogaloo Bois.”

After the initial gunshot, Richards said Rosenbaum was “closing the distance” and wearing a maroon shirt as a mask to disguise his identity “because he want[ed] to steal my client’s firearm and use it against him to carry out the threat he made earlier.”

“Fuck you!” Rosenbaum was allegedly yelling just before Rittenhouse fired, Richards said. Another witness, Richie McGinniss of the right-wing website the Daily Caller, would call it “one of the scariest screams I’ve ever heard” before he “dove for Kyle Rittenhouse’s gun.” 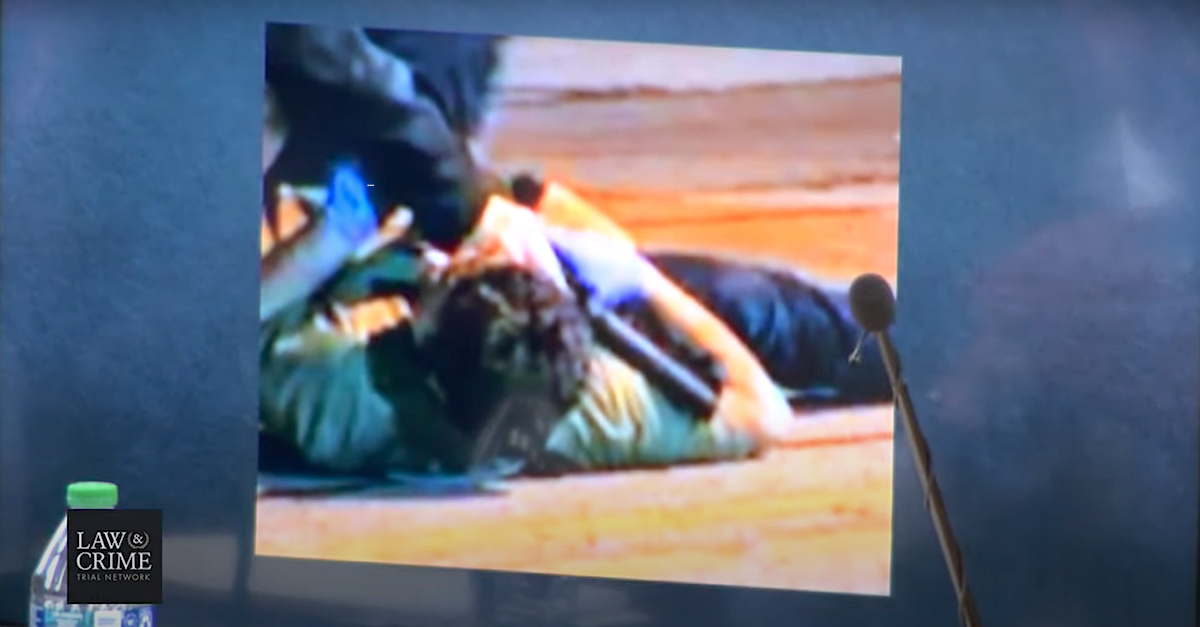 Anthony Huber and Kyle Rittenhouse appear in an Aug. 25, 2020 image showed by defense attorneys during opening statements. Rittenhouse, in green, is on the ground. (Image via the Law&Crime Network.)

After shooting Rosenbaum, Richards said, Rittenhouse was fearful that Anthony Huber was about to disarm him and kill him with his own weapon.  Richards shared various images showing the confrontation which he said portrayed Rittenhouse’s vulnerability as Huber went for his weapon. 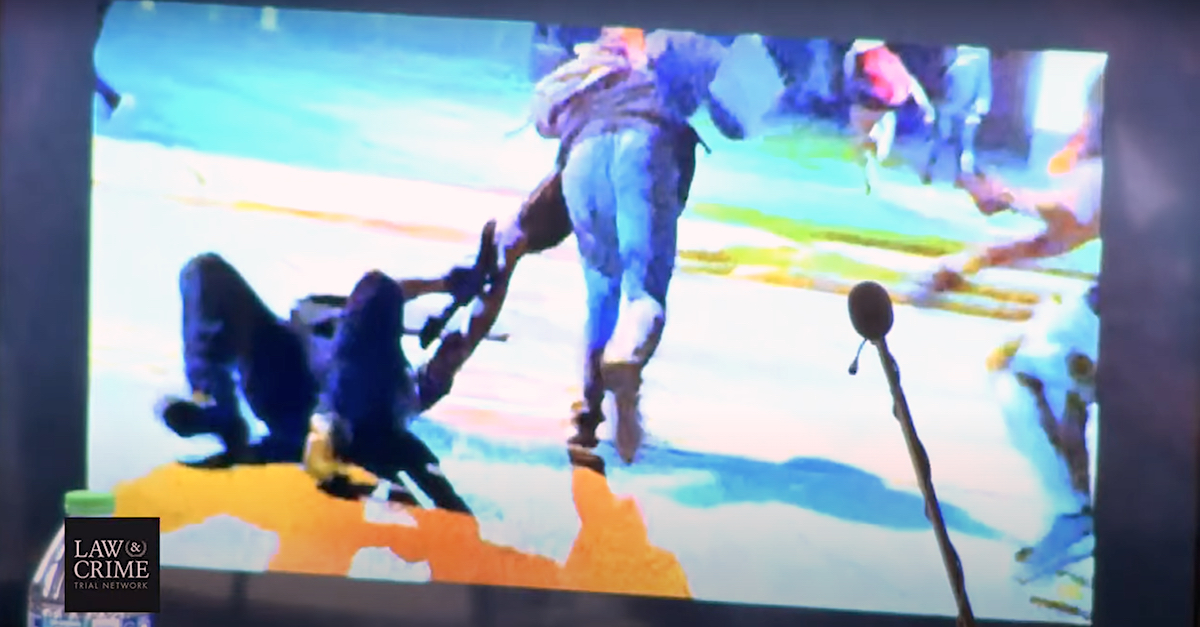 Anthony Huber (standing) attempted to disarm Kyle Rittenhouse (on the ground) after Rittenhouse shot and killed Joseph Rosenbaum. (Image via the Law&Crime Network.)

Countering a point made by the prosecution, Richards said others did not fire because they were a distance from the action and were not attacked the way Rittenhouse was attacked.  Richards glossed over the legal reality that it is possible to use deadly force to protect the life of another person if the force is reasonable.  He did not address the possibility that others may not have used deadly force because they did not perceive Rittenhouse as facing a serious threat — which the prosecution did argue.

Richards said Grosskreutz failed to tell the police that he was shot because he was armed.  He told the police he entered the fray to prevent Huber from beating Rittenhouse, Richards said.

Richards claimed the police told Rittenhouse to go home when he attempted to turn himself in.  Rittenhouse eventually turned himself in to authorities in Antioch, Ill., later that night. 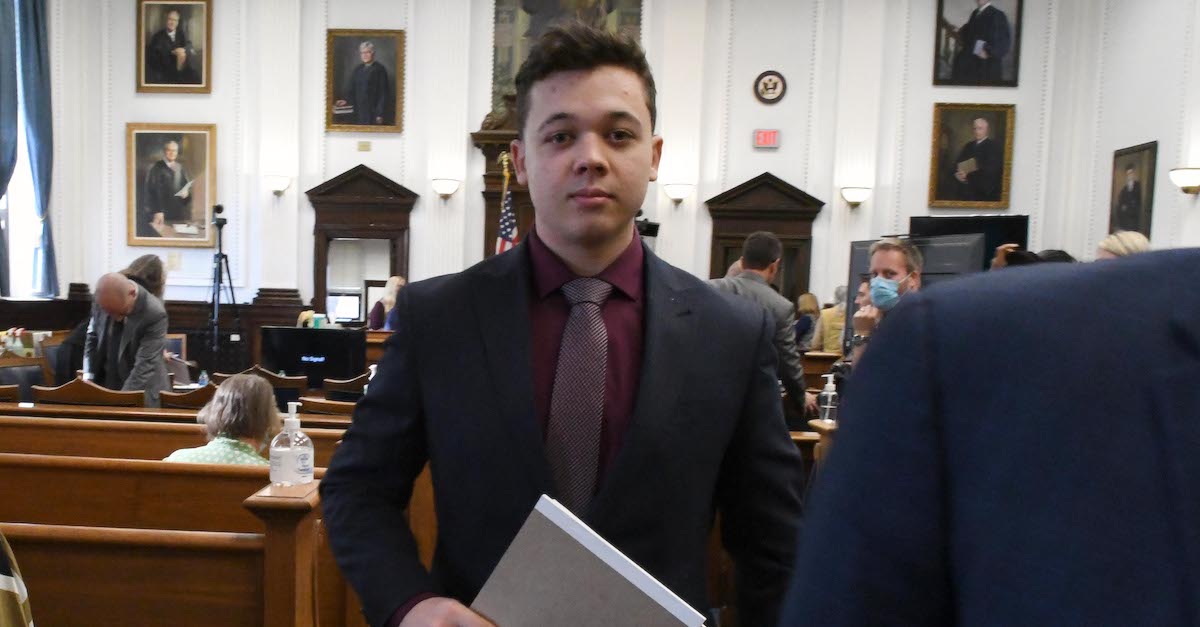 Kyle Rittenhouse leaves the courtroom for a lunch break after opening statements on Nov. 2, 2021.

“He acted in self defense, ladies and gentlemen,” Richards said. “The evidence will show that his actions on Aug. 25 of 2020 were reasonable under the circumstances as they existed that night being attacked by Mr. Rosenbaum.”

“He didn’t endanger those other individuals,” Richards continued by addressing the final two people Rittenhouse shot. “The government can refer to him all they wish as an active shooter. The only person he had shot was Joseph Rosenbaum, who had made threats to kill, had made numerous statements about ripping people’s hearts out,” and who “wasn’t afraid to go back to jail.”

“The evidence will show that [Rosenbaum] thought — probably — that he could get that gun from Kyle Rittenhouse. He was wrong. Kyle Rittenhouse protected himself, protected his firearm so it couldn’t be taken — used against him or other people,” Richards continued. “And the other individuals who didn’t see that shooting attacked him in the street like an animal. Ladies and gentlemen, that’s what the evidence will show.” 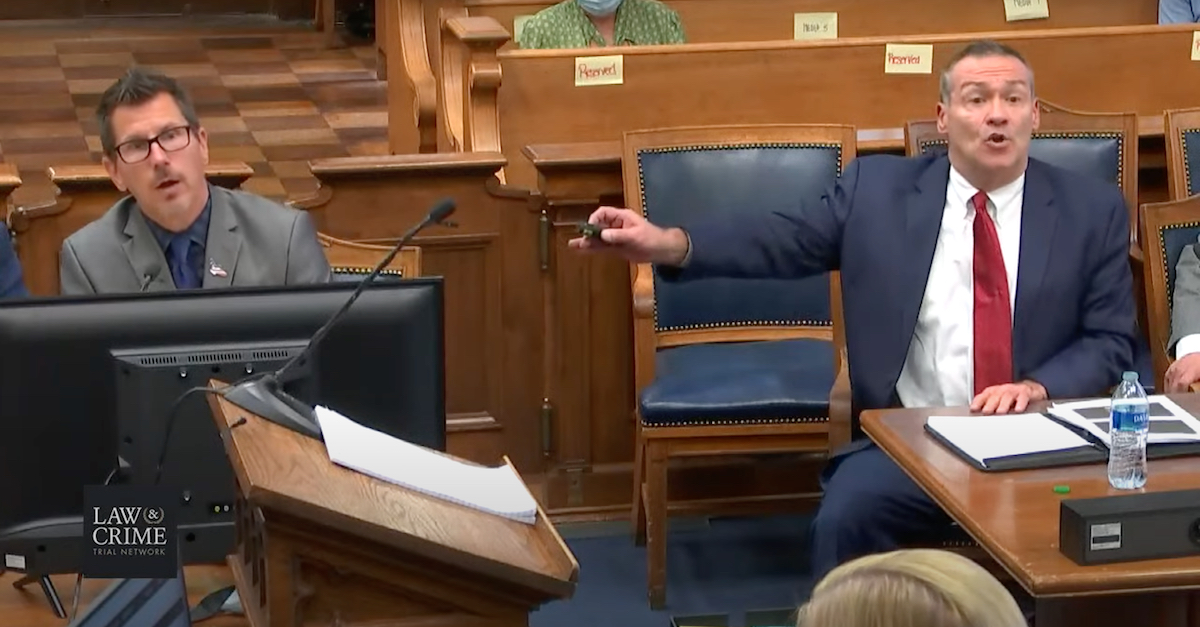 Assistant Kenosha County District Attorney Thomas Binger and defense attorney Mark Richards faced off during an argument outside the presence of the jury. (Image via the Law&Crime Network.)

Prior to the defense opening statement, prosecutors objected to the defense’s attempted use of more than forty pieces of evidence during this pre-testimonial portion of the proceeding. Assistant Kenosha County District Attorney Thomas Binger said the defense’s attempt to use images that hadn’t even been entered into evidence at this stage in the case was “highly unusual” in his jurisdiction. He suggested that the defense should be allowed only to describe the evidence but not be allowed to show it to the jury.

Judge Bruce Schroeder acknowledged that the defense was attempting to use a “record number” of images during opening statements but said the law did not prevent the use of the material. 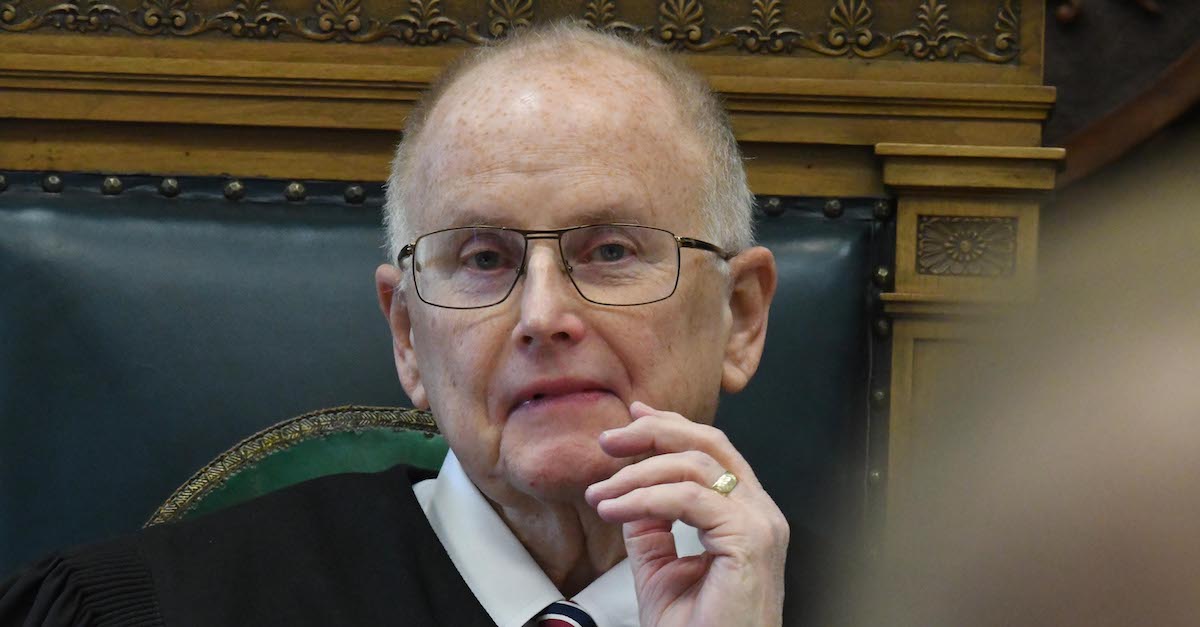 The attorneys then fought over whether the defense could reference a pending court against involving a no-contact order against Joseph Rosenbaum and tell the jury that Rosenbaum was allegedly (according to the defense) receiving mental treatment prior to his death.

Prosecutors challenged the characterization of Rosenbaum’s treatment. Even if Rosenbaum did have a mental illness, prosecutors said that fact was an “irrelevant” issue that the defense failed to raise in a pretrial motion pertaining to the character of the victim.

Defense attorney Richards said Rosenbaum was seeking treatment for an attempted suicide and accused Binger of “misrepresenting the facts of the case” to the jury. Richards further alleged that Rosenbaum wasn’t acting in his right mind and that the penumbra of issues surrounding Rosenbaum was relevant to the defense.

Schroeder suggested that the victim’s mental state was probably not admissible.