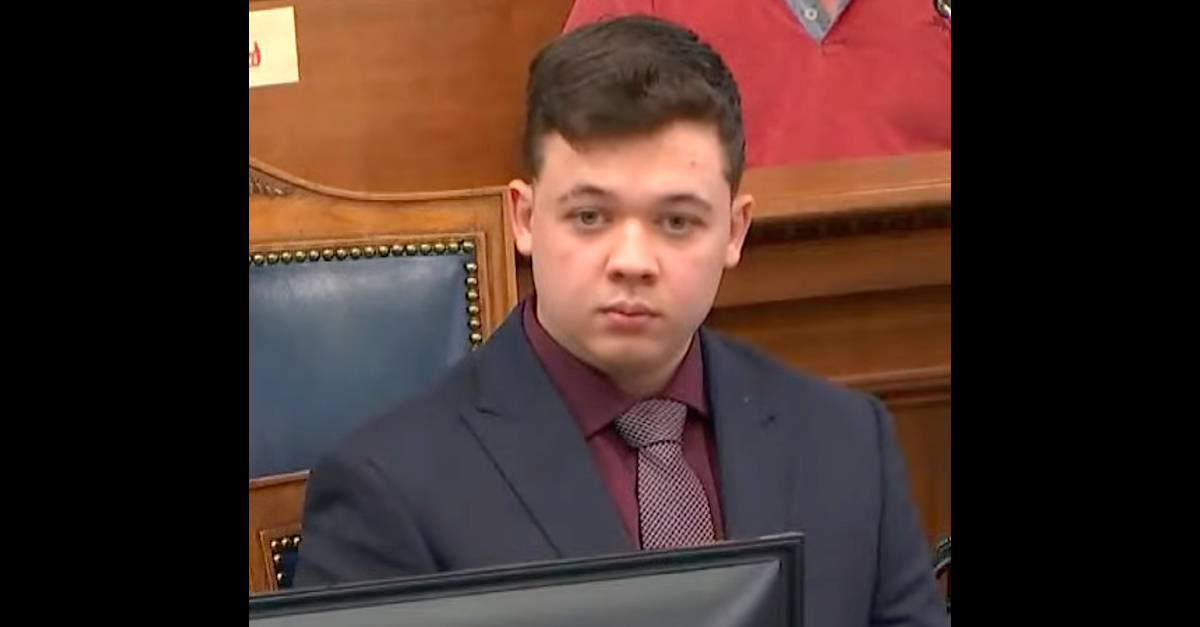 Kyle Rittenhouse appears in court during a motions hearing which prior to opening statements on Tues., Nov. 2, 2021, in his multi-count intentional homicide case. (Image via the Law&Crime Network.)

Prosecutors have delivered opening statements to a Wisconsin jury empaneled to determine whether Kyle Rittenhouse is a murderer or a teen who acted lawfully in self defense.

Assistant Kenosha County District Attorney Thomas Binger told the jury that Rittenhouse, then 17, “armed himself with an AR-15 style semiautomatic rifle loaded with 30 rounds in the magazine” and shot and killed Joseph Rosenbaum, 36, an “unarmed man,” on Tues., Aug. 25, 2020.

“The shot that killed Mr. Rosenbaum was a shot to the back,” Binger said. “This occurred after the defendant chased down Mr. Rosenbaum and confronted him while wielding that AR-15.”

Binger said Rittenhouse ran from the body and refused to offer help. Word spread, the prosecutor said, that an “active shooter” was running amok.

Anthony Huber, 26, hit Rittenhouse with a skateboard. Another individual went after Rittenhouse; Rittenhouse fired but missed. Huber tried to grab Rittenhouse’s gun, but it was “strapped” to Rittenhouse’s body, Binger said. Huber couldn’t get the gun; Rittenhouse pulled the trigger, fired one shot, and killed Huber “instantly.”

Next, Gaige Grosskreutz, 26, approached Rittenhouse. He carried a cell phone (which was broadcasting a Facebook livestream) and a Glock. Grosskreutz “raises his hand” as if to signify he would not fire, Binger said; then Grosskreutz reached for Rittenhouse’s gun. Rittenhouse fired the “eighth and final round,” Binger said.

“On that night, he killed two unarmed people, shot at a third at very close range, and wounded Mr. Grosskreutz in the arm who was armed with a gun,” the prosecutor continued. “It is the state’s position that this evidence demonstrates the criminal charges against the defendant.”

Binger said the incident was but a “snapshot” of the broader picture: the killings occurred during protests surrounding the shooting of Jacob Blake by police officer Rusten Sheskey. The events included “protests, looting, rioting, arson, violence.” He called them “two of the roughest nights our community has ever seen.”

“In the entire sequence of events, this was all property damage,” Binger said. “And one of the thing we had all agreed on yesterday is that life is more important than property. Up until Tuesday night, despite all the things the community had experienced, no one had been killed.”

The prosecutor said the protests caused many citizens to “fear for their safety, fear for their homes and their families, and fear for their businesses.” Those who did fear the events took up arms, boarded up windows, and even moved away temporarily.

“Those reactions were entirely understandable and reasonable, and no one here is going to tell you otherwise,” Binger said. “As long as those are what you’re left doing, there’s no issue.”

Binger distinguished Rittenhouse from the “hundreds of people who came to Kenosha that week” as the “only person who killed anyone was the defendant, Kyle Rittenhouse” — a point he repeated several times. 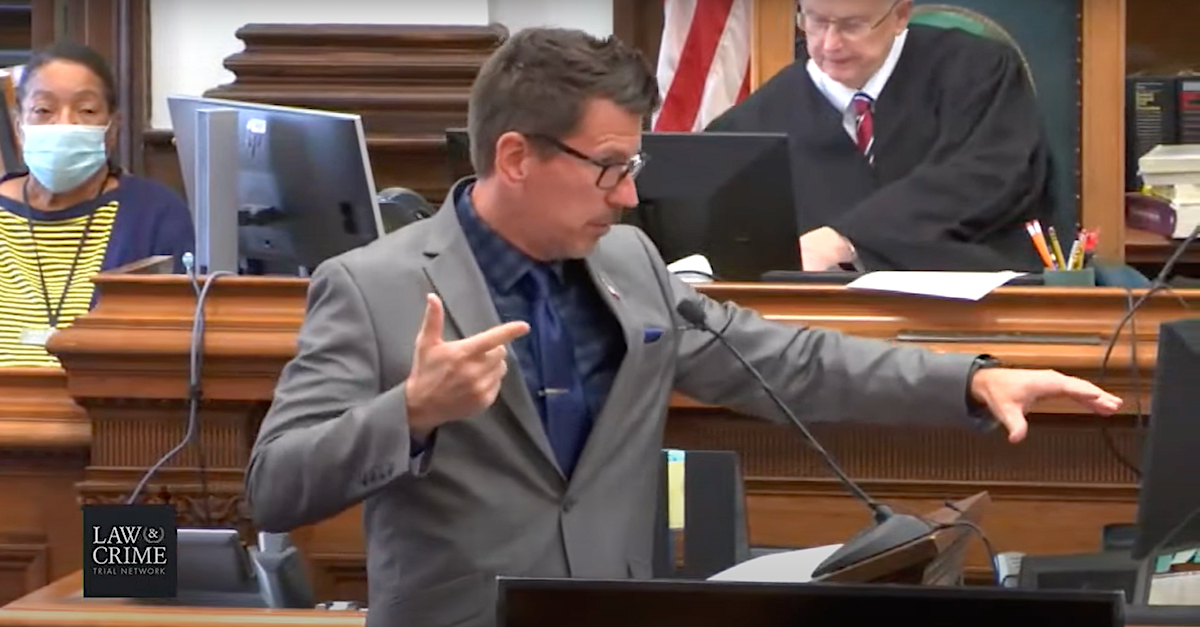 Binger characterized Wisconsin self-defense law as one of only “limited” help for the defendant. He said Dominick Black purchased Rittenhouse’s AR-15-style rifle in Ladysmith, Wis., prior to the shooting because Rittenhouse wasn’t old enough to buy it. The prosecutor promised that Black will testify about the purchase — which he characterized as a “straw” purchase for Rittenhouse. He said Rittenhouse and Black helped clean graffiti but eventually decided to “protect” a business called Car Source. Rittenhouse obtained a strap for his AR-15 for that night, Binger said, and talked to the business owner to “protect” the property.

“There’s nothing wrong with that,” Binger said. “Protecting that property is entirely lawful; totally understandable. And it’s something that many people here in Kenosha did.”

Rittenhouse and others took up positions around the business and began interacting with other protesters, the prosecutor explained. Black said he took up a position on the roof so as not to become “directly involved” with an altercation.

Rioting commenced. Protesters moved past the defendant’s location. Words and “antagonism” were exchanged, but violence did not ensue, Binger said.

“This is a crowd that is not on the same side as the defendant, that does not see him as an ally, does not see him and his group as someone they identify with,” Binger said. “At one point, members of the crowd pull one of the dumpsters from the property out into the street and attempt to start it on fire.”  Rittenhouse and others tried to put the fire out and had “very harsh interactions with those people in the street.”

“This process that demonstrated for the defendant that this is a crowd that this is not a safe crowd to be in,” Binger suggested. “If he ventures out into it, there could be problems.”

But the crowd passed, Binger told the jury; “the situation has moved on.” But Rittenhouse and another individual “ventured out into the crowd,” crossed a police line, and ended up at Ultimate Gas at Sheridan Road and 60th Street. Rosenbaum, standing at 5’3″, was present carrying a plastic bag; he had just returned home from the hospital. Rosenbaum was “using obscenities” and was antagonizing people. Others with weapons did not fire.

“No one appears to take him as a serious danger,” Binger told the jury.

Rittenhouse claimed he “worked” at an area business but was not allowed to pass a police line.

FBI officers were flying overhead in a plane equipped with infrared video equipment, Binger said. The video shows Rittenhouse chasing Rosenbaum and “initiated” a “confrontation” that “caused Mr. Rosenbaum to come around” a set of cars and run after Rittenhouse. Rittenhouse dropped the fire extinguisher but ran with his AR-15. Rosenbaum, who was wearing no shirt, put his hands in the air; Rittenhouse stopped and pointed at Rosenbaum. Another individual, Joshua Ziminski, 35, fired a gunshot 2.5 or 2.6 seconds in the vicinity. Then Rittenhouse fired at Rosenbaum. He suffered five wounds from four bullets. The first wounds struck his right pelvis and his left lower thigh, Binger said. Those wounds called Rosenbaum to fall “face-forward,” the prosecutor said; Rittenhouse fired two more shots; one stuck Rosenbaum in the back — and that is the shot that killed Rosenbaum.

Richard McGinnis, of the right-wing website Daily Caller, was in the area; he attempted to provide first aid, the prosecutor said. Others also responded to the scene and carried Rosenbaum to a hospital right across the street. The defendant called Black, says he just shot someone, and started running away.

“The defendant held himself out as an EMT” and carried “a medical bag,” Binger noted. Instead, he offered no aid, the prosecutor said.

Others perceived Rittenhouse as an “active shooter,” Binger said.

The prosecutors then addressed the reality that many on the jury had heard at least something about the high-profile shooting. He promised that he would present evidence that had never been made public before.

“I think you will agree with me that the defendant is guilty of all of these charges,” Binger told the jury.

RELATED: Defense Says Kyle Rittenhouse Was Attacked ‘in the Street Like an Animal’

While reciting jury instructions, Judge Bruce Schroeder told the panel not to use certain criteria in making their decision — including “race” and “politics.” 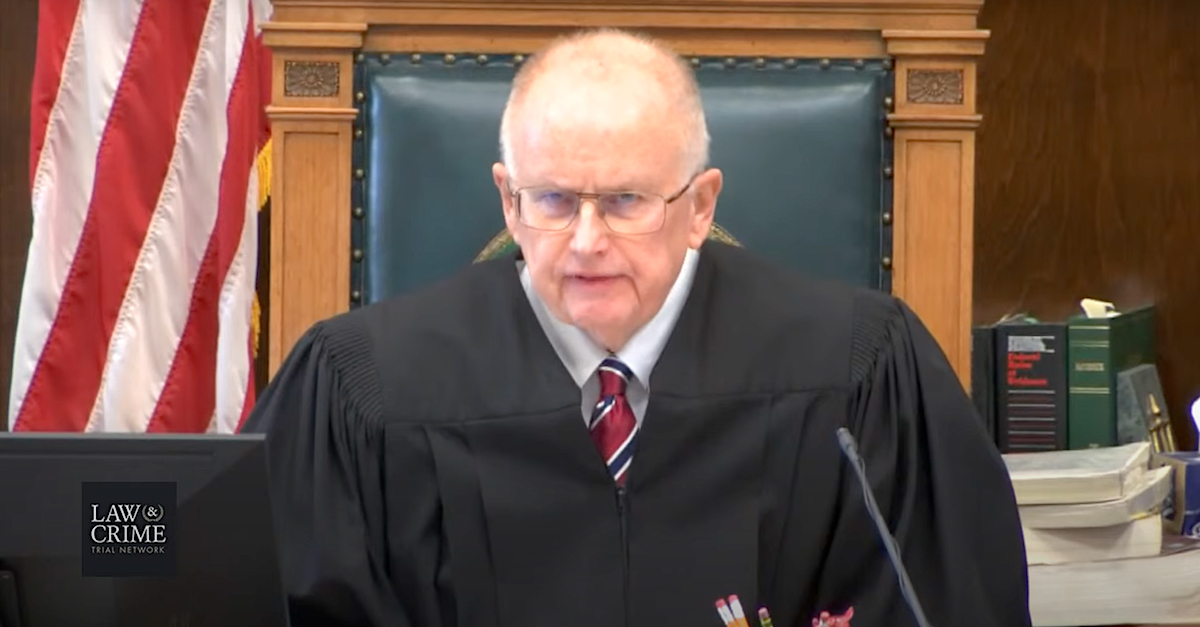 Judge Bruce Schroeder speaks to attorneys prior to jury instructions in the Kyle Rittenhouse trial on Nov. 2, 2021. (Image via the Law&Crime Network.)

“Self defense is an issue in this case,” Schroeder told the jury while reciting the instructions. “The law of self defense allows any defendant to threaten or intentionally use force against another only if the defendant believed there was an actual or imminent unlawful interference with his own person . . . and that he believed that the amount of force he used or threatened to use was necessary to prevent or terminate the interference and that his beliefs were reasonable. The defendant may intentionally use force which is intended or likely to cause death or great bodily harm only if the defendant reasonably believed that the force used was necessary to prevent to imminent death or great bodily harm to himself. A belief may be reasonable even though it is mistaken.”

The state must prove to the jury beyond a reasonable doubt that Rittenhouse “did not act lawfully in self defense,” Schroeder said.

At times veering off the standard jury instructions to tell the panel how to “analyze” the facts and the law, Schroeder said Rittenhouse cannot use self-defense to address charges connected to the presence of McGinnis, the Daily Caller writer who the judge characterized as being “in the area of the gunfire.”