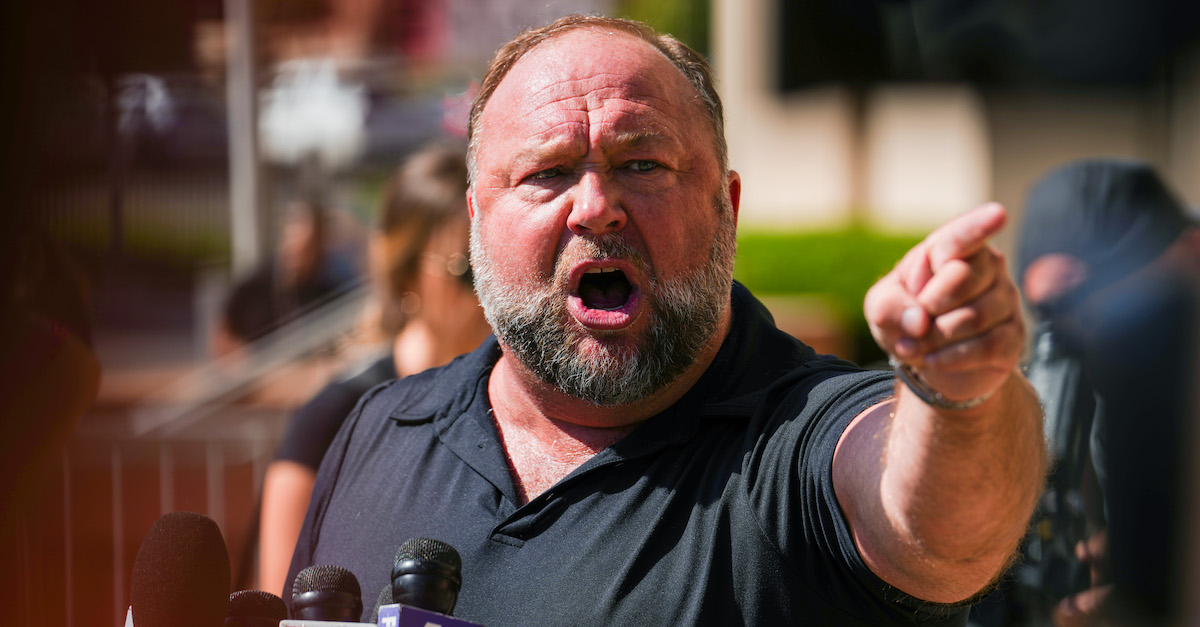 Infowars host Alex Jones on Friday asked a Connecticut superior court judge to set aside a nearly $1 billion verdict in favor of families who lost loved ones in the Sandy Hook Elementary School shooting.  The families sued Jones over his myriad conspiracy theories surrounding the Dec. 14, 2012 mass murder — including Jones’ since-retracted claims that the shooting was a “hoax.”

The total damages awarded by a jury in the Constitution State were $965 million.

Jones’ post-trial arguments on Friday came the same day the plaintiffs accused him of “greed.”

“Alex Jones will never treat them [the plaintiffs] like real people, because they are too valuable to him as targets,” that filing asserted.

The Jones filings, however, hit the docket first.  In one, an attorney for Jones argues that the monumental “verdict is exorbitant and a result of passion and prejudice.”

That document further asserts that the Sandy Hook plaintiffs failed “to offer any evidentiary standard by which the jury could calculate damages.”  Therefore, the verdict was “a species of wild speculation unsupported by law” and was entered in violation of principles of due process, according to Jones’ attorneys.

In another document, Jones lawyers Norm Pattis and Kevin Smith say the judge’s handling of the case “resulted in a complete abdication of the trial court’s role in assuring a fair trial and that the amount of the compensatory damages award exceeds any rational relationship to the evidence officered at trial.”

“The defendants seek a new trial,” that document says.  “The verdict in the instant case is both unjust and against the weight of the evidence.”

The four documents filed by the defense are a motion to set aside the verdict (which calls for a new trial), a motion for “remittitur” (which is a request to correct an allegedly unfair damages award, sometimes without a new trial, though one is requested here), and two separate memoranda of law in support of those two motions.

The memorandum in support of the remittitur request carries the arguments further.  It asserts that the original default judgment against Jones — for what the judge concluded were repeated discovery violations — resulted in an incorrect picture for the jury to consider:

In short, the defendants contend that the cumulative weight of the court’s ruling on pre-trial motions and its evidentiary rulings resulted in a complete abdication of the trial court’s role in assuring a fair trial resulting in a substantial miscarriage of justice. Jurors were presented with half-truths and led to believe that facts had been established where no such thing had occurred; a disciplinary default for discovery non-compliance permitted the plaintiffs’ counsel to mislead the jury. Additionally, the amount of the compensatory damages award exceeds any rational relationship to the evidence offered at trial. The defendants seek a new trial. The verdict in the instant case is both unjust and against the weight of the evidence.

The jury was empaneled only to address the amount of damages Jones would have to pay, if any.  Jones’ discovery violations foreclosed a trial on the merits, a judge ruled.

The Jones document then goes on to note that Adam Lanza was the actual murderer of 20 children and six adults in Newtown — as if to exculpate Jones from the most serious harms suffered.

Jones then explains in the filing what he believes legally went wrong when the default judgement was entered and the jury was nonetheless empaneled:

The trial was limited to damages, as a result of a disciplinary default after repeated motions by the plaintiffs requesting such spanning several years. Despite the defendants having turned over tens of thousands of emails and documents, having employees sit through dozens of depositions, and responding to both written discovery requests and requests for admissions, the court entered a default, finding a willful failure to substantially comply with discovery obligations, The [sic] jury was left to decide damages alone.

At trial, the court construed the default in such a manner as to eliminate any need for the plaintiffs to demonstrate that the harm they suffered was caused by Mr. Jones. The trial record is replete with claims of harassment that are unattributed to a declarant, lack any demonstrable nexus to the defendants and, in may instances, fail to meet even minimal indicia of reliability. One plaintiff, for example, reported hearing through a third party that some other person had urinated on the grave of their deceased child. This, too, without more, was attributed to the defendants.

Jones’ attorneys argue that the default judgment itself should be characterized and viewed as a violation of state law given that the underlying dispute involves the First Amendment — though they admitted the question remains open in Connecticut regarding “whether a liability default is ever appropriate in a case involving speech.”

Jones’ attorneys also wrote that the trial judge “eviscerated” the “concept of causation” by allowing the jury to simply assume that the harms suffered by the plaintiffs were related “to anything Mr. Jones said or did.”

Again, from one of the filings, at length:

By severing that connection between harm “established” and damages caused by that harm, the plaintiffs were free to blame Mr. Jones for whatever harm they suffered involving harassment at the hands of third parties. The trial court transformed the proceeding into a bizarre example of existential strict liability, all but handing a blank check to the plaintiff’s lawyers. In weeks of testimony the plaintiffs did not prove by competent evidence that Mr. Jones ever sent anyone to harass a plaintiff, or that anyone who listened to him heeded a call from him to harass a plaintiff. The jury was instructed that liability had been “established,” a disciplinary default was transformed into a fatal impression that somewhere, someone had somehow proven that Mr. Jones did exactly what the plaintiffs alleged. The parties filed cross-motions in limine on whether the jury should be told the truth about the default in order to avoid the jury’s being misled. The court sided with the plaintiffs, keeping the truth from the jury and permitting them to labor under the false impression that a finding had been made that Mr. Jones had, in fact, caused the harms.

Not one witness in the case appeared to testify that they harassed a plaintiff at the behest of Mr. Jones; neither did Mr. Jones himself harass a plaintiff – indeed, Mr. Jones only ever broadcast the name of one plaintiff, Robbie Parker. The closest thing the jury saw to harassing conduct was videos of Dan Bidondi, an Infowars employee, and Wolfgang Halbig, a man who to this day denies that the Sandy Hook shootings took place, haranguing Newtown officials over their “coverup” and participation in a “hoax.” No plaintiff was present at that event and no plaintiff ever testified to seeing either man. The only other testimony about an individual arguably connected to Mr. Jones “harassing” a plaintiff came in the form of testimony about a man named Mark Mills who harangued members of the Soto family at a memorial road race. Mills was a guest on Mr. Jones’ show after disrupting a Superbowl press conference to claim that 9/11 was an “inside job” by the government. Mr. Jones promised to talk to him off the air, and suggested he might like Mr. Mills to do some work for Infowars. Eighteen months later, Mr. Mills turned up in Connecticut at the road race. No evidence suggests he was sent to, or was otherwise motivated to go to, the road race by Mr. Jones. Mr. Mills was arrested, the jury was told.

The filings also allege that the plaintiffs improperly argued that Jones needed to be “stopped” from committing similar future acts.  That tactic, according to Jones, was an improper substitute for a properly argued compensatory damages claim for specific harms suffered:

Arguing that Mr. Joners [sic] must be stopped is not an argument for compensatory damages. Neither is an argument that he must he held accountable. It is the responsibility of plaintiffs to meet a burden of proving that a sum will compensate the plaintiffs for the harm they have endured and likely will endure. The plaintiffs never did this in this case, focusing instead on arousing sympathy, directing anger, and anchoring a large number before the jury with the hope that jurors would do what they did in this case – award a fortune.

Another of the filings contains additional complaints as to how the plaintiffs presented their damages claims:

Jones’ total liabilities in connection with the Sandy Hook cases have passed the $1 billion mark, though that number has not yet been adjusted on appeal.

Earlier this year, a Texas jury ordered Jones to pay $4.1 million in compensatory damages and $45.2 million in punitive damages. Sandy Hook parents Neil Heslin and Scarlett Lewis, the couple behind the Lone Star State case, are fighting to uphold the entire award, but the punitive damages likely will be reduced under Texas law.

At the subsequent Connecticut trial, other Sandy Hook plaintiffs suggested that Jones dug in on his “hoax” conspiracy theories because doing so earned him considerable amounts of money.  In his Friday filings, Jones countered that his enlarged profits were likely the result of his stalwart and reciprocal support to and from Donald Trump and were not directly attributable to his Sandy Hook broadcasts.

The Sandy Hook plaintiffs filed their own brief on Friday to support a significant punitive damages award.  That single yet 133-page motion dwarfs Jones’ myriad documents in total volume.

The plaintiffs’ filing accuses Jones of a nearly ten-year-long attack on the Sandy Hook families.

“Alex Jones perpetrates this attack for one reason:  greed,” the plaintiffs’ filing asserts.  “This campaign of lies feeds Jones’s bank accounts, fills his cryptocurrency wallets, and defines his brand. No lie about these plaintiffs is too cruel, too immoral, or too dangerous. Alex Jones will never treat them like real people, because they are too valuable to him as targets.”

All 49 pages of Jones’ motions are available here.

All 133 pages of the plaintiffs’ motion are here.