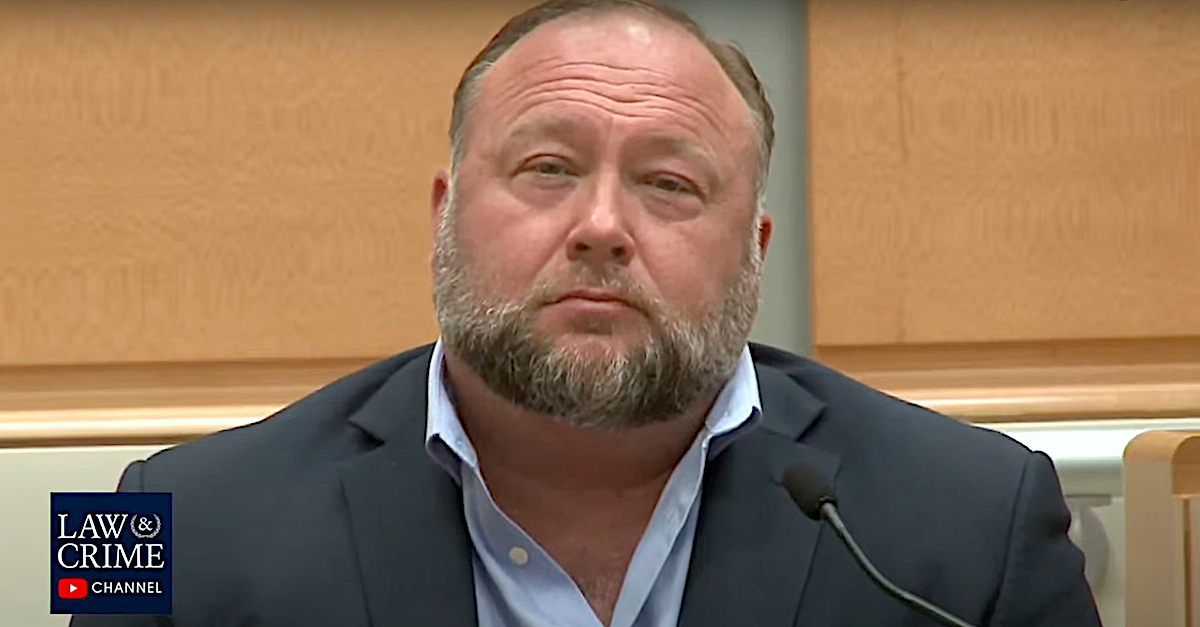 Alex Jones testified in Waterbury, Connecticut on Sept. 22, 2022, in a civil lawsuit surrounding his original claims that the Sandy Hook Elementary School massacre was a “hoax.” (Image via the Law&Crime YouTube Channel)

Right-wing broadcaster Alex Jones must pay nearly $1 billion to Sandy Hook families and an ex-FBI agent whom he defamed by describing them as participants in a “hoax,” a Connecticut jury found on Wednesday.

The damages will compensate eight families, consisting of more than a dozen plaintiffs in total, and a former FBI agent. Jones must pay $120 million to just one of the plaintiffs alone. That and the remaining damages added up to $965 million, with further damages to be determined.

If previously imposed damages are affirmed on appeal, Jones’s liabilities will pass $1 billion.  Earlier this year, a Texas jury ordered Jones to pay $4.1 million in compensatory damages and $45.2 million in punitive damages. Sandy Hook parents Neil Heslin and Scarlett Lewis, the couple behind the Lone Star State case, are fighting to uphold the entire award, but the punitive damages likely will be reduced under Texas law.

Connecticut law caps punitive damages, which will be awarded separately, at attorneys’ fees and costs.

The Connecticut plaintiffs were led by Bill Sherlach — the widower of slain school psychologist Mary Sherlach, who was awarded $36 million — and joined by former FBI agent William Aldenberg, who was awarded $90 million.

In both the Texas and Connecticut litigation, family members of Sandy Hook victims sued Jones for defamation over broadcasts claiming that the government staged the mass shooting to weaken the Second Amendment right to bear arms. The statements roped the grieving families, and law enforcement, into an elaborate conspiracy theory depicting them as crisis actors.

As far back as the 1990s, Jones has claimed to see the government’s hand in mass tragedies, including the Oklahoma City bombings and the 9/11 attacks, for some sinister motive. His Sandy Hook broadcasts stoked outrage against the surviving family members of the 28 people slain on Dec. 14, 2012, who were mostly elementary children and some adult staff members. Killer Adam Lanza also shot himself and his mother.

Ex-FBI Agent Aldenberg, a member of the SWAT team that responded that day, emotionally recounted the tragedy and the wave of harassment and threats that he attributed to Jones’s massive audience.

“People [started] calling all kinds of numbers in Newtown, saying that, ‘This is Adam Lanza. I’m going to come and kill you all,’” Aldenberg testified.

Family members of Sandy Hook reported similar campaigns of harassment and threats — which they blamed on conspiracy theories aired on Jones’s Infowars — during both the Texas and Connecticut cases.

Before both trials began, Jones defaulted on the merits of the defamation allegations against him by repeatedly flouting his discovery obligations. Discovery is process through which the parties share evidence with each other before trial.

As a result, judges presiding over the cases instructed jurors that their task was to determine the amount of damages, not whether Jones defamed the victims.