Families of Dayton Mass Shooting Victims Sue Over 100-Round Magazine 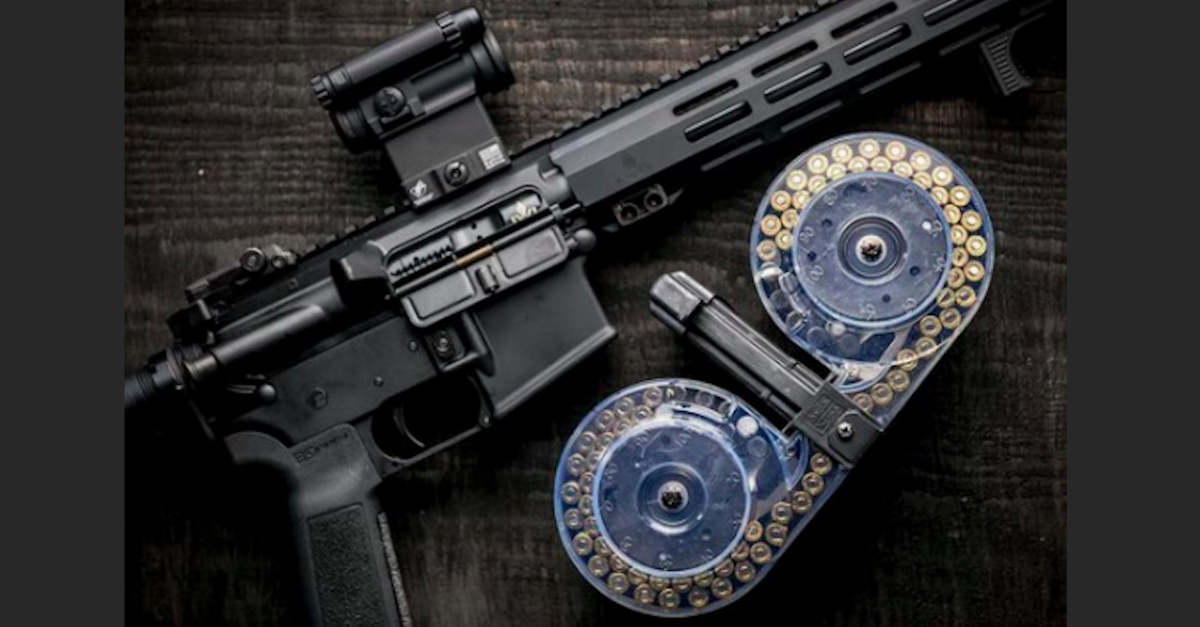 The 100-round magazine used by Connor Betts in Dayton mass shooting.

Families of the victims of the 2019 mass shooting in Dayton, Ohio filed a lawsuit Sunday night against the manufacturer of the high-capacity magazine used by gunman Connor Betts when he opened fire on the crowd inside a local bar in 2019. The mass shooting only lasted for approximately 32 seconds, but Betts,  armed with a rifle equipped with a double-drum 100-round capacity magazine, was able to fire 41 rounds. Betts killed nine people and injured another 27 before he was gunned down by responding police officers.

The families allege that the manufacturer of the magazine—Kyung Chang Industry USA, Inc. and its related South Korean company, Kyungchang Industry Co., Ltd.—should have known that their product would be sought by potential mass shooters but failed to implement any protocols to see prevent that from happening.

“A 100-round [Large Capacity Magazine] meaningful utility is solely limited to military assaults or their civilian equivalent—mass shootings,” the suit states. “Defendants deliberately marketed and sold to the general public LCMs—not just any LCMs, but 100-round magazines that have 3-5 times the killing capacity of already dangerous 20- or 30-round magazines. And they sold these instruments of slaughter without any reasonable safeguards, screening, or limits.”

The complaint, filed in Clark County, Nevada, includes claims of negligence, negligent entrustment, and public nuisance and seeks to prevent the company from continuing to market and sell the magazine. The families are also seeking “damages for the harm foreseeably flowing” from the “reckless conduct” of the manufacturer

“Despite their actual or constructive knowledge that violation of one or more aspects of their duties of care would create a significant risk that a product like the Magazine would be used to perpetrate a mass shooting like the Attack, Defendants chose to violate one or more aspects of their duty of care in ways which directly and foreseeably led to the Attack,” the suit states. “Had Defendants not violated their duty of reasonable care by placing an unreasonably dangerous product on the civilian market, the Shooter would never have gained access to the Magazine.”

Ohio native Ethan Kollie, a friend of Betts’s who purchased the magazine and body armor used by the now-deceased mass murderer, was sentenced to 32 months last year after he pleaded guilty to lying on federal gun-purchasing forms and possessing a gun while on illegal drugs. Authorities said Kollie did not appear to know what Betts was planning to do with the equipment.

Jonathan Lowy, the chief counsel and vice president for the Brady Campaign to Prevent Gun Violence, which joined the families in the suit, said that it was a first of its kind to target a magazine manufacturer.

“We believe this lawsuit is the first to focus solely on the dangers presented by the indiscriminate manufacture and sale of a large-capacity magazine. These are instruments of terror that have been used over and over to turn everywhere from shopping centers to churches to elementary schools into war zones,” Lowy said in a statement. “Two years ago in Dayton, OH, a 100-round ammunition magazine enabled a shooter to turn a popular entertainment district into a battle scene that killed nine people and wounded 17 others. We are bringing this suit on behalf of victims and survivors in hopes to prevent another tragedy like Dayton. We look forward to proving our case in court.”