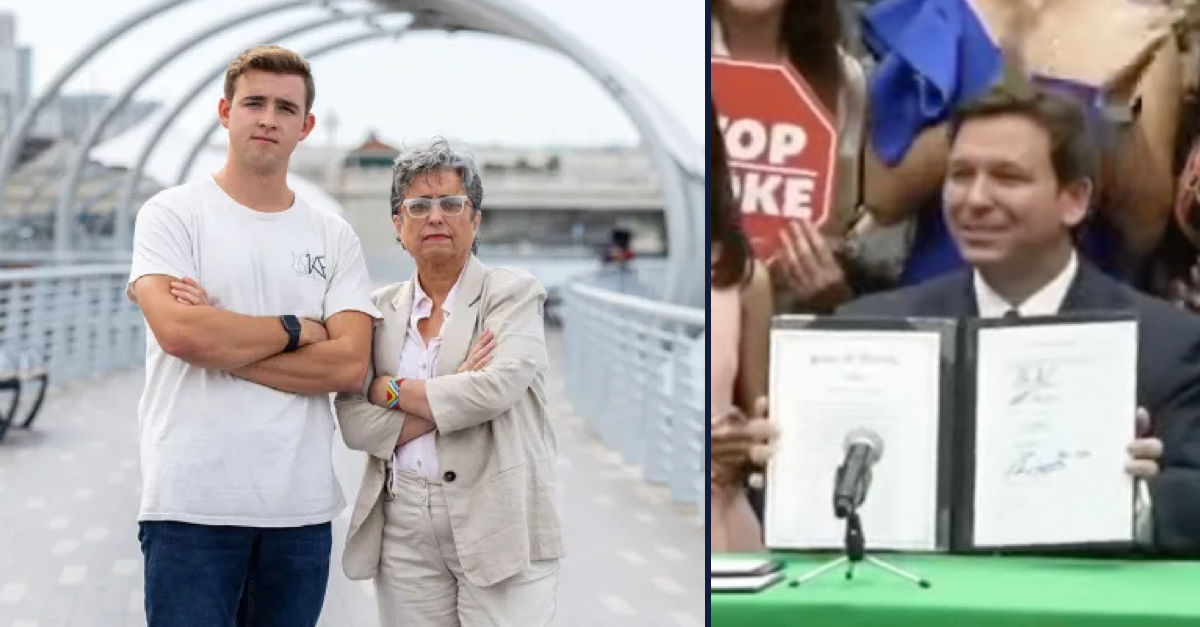 A professor and student group from the University of South Florida have banded together to sue Florida’s Department of Education over enforcement of the state’s so-called “Stop WOKE Act,” alleging that it unconstitutionally impedes their ability to speak freely in class.

Adriana Novoa, a history professor at USF, and Samuel Rechek, a student and the school and president of the First Amendment Forum, a student group are suing to stop the state’s Department of Education Commissioner Manny Diaz, Jr. from enforcing the “Stop Wrongs To Our Kids and Employees Act” against the school.

Gov. Ron DeSantis (R) signed the law in April, praising it for providing “tools to stand up against discrimination and woke indoctrination” and including provisions to prevent “discriminatory instruction in the workplace and public schools[.]” Diaz, the complaint says, was a “principal sponsor” of the act.

Novoa, a professor at USF since 2001, says that the law directly interferes with her ability to teach some of her undergraduate courses, including Science in Cultural Context, History of Sports from National to Global Contexts, and Modern Latin America.

“Professor Novoa’s instruction in each of these three courses (and others) involves ‘advancing’ concepts prohibited by the Stop Woke Act,” the lawsuit says. “The Stop WOKE Act has had (and will continue to have) a chilling effect on Professor Novoa. The first moment she endorses a prohibited viewpoint or advances a student’s argument on a prohibited concept — which she has done before and intends to do this academic year — she will expose herself to disciplinary action and liability for attorney’s fees and will expose her university to the loss of approximately $73 million in annual funding.”

The complaint notes that Novoa “grew up under a dictatorship in Argentina before immigrating to the United States.”

Rechek is a student who plans on taking Novoa’s Science in Cultural Context class in the spring of 2023.

This class, the lawsuit says, “covers the Stop WOKE Act’s prohibited concepts” and prohibits him from debating those concepts with Novoa and other students in the class.

The complaint argues that the law itself imposes unacceptable limits on free speech.

“The Stop WOKE Act’s prohibitions also deprive Rechek and other members of the First Amendment Forum of access to education free from the ‘pall of orthodoxy’ imposed by Florida’s political leaders,” the complaint says (citations omitted). “That limitation limits students’ ability to hear from—and chills students’ willingness to ask questions of—faculty whose views may be contrary to those of the State of Florida. Rechek and the First Amendment Forum sue to preserve students’ right to information unfiltered by state orthodoxy.”

Critics of the law have said that the law is nothing more than an attempt by the governor to block conversations and lessons about the history of racism in the United States.

The Foundation for Individual Expression (FIRE), a non-partisan organization that advocates on behalf of people who believe they have experienced discrimination for expression their opinion, filed the lawsuit, according to a press release announcing the case.

As the press release notes, the complaint is different from some of the other lawsuits that have already been filed over the law. In one of those cases, a federal judge has issued an injunction barring enforcement of the act against a private company that says the law violates the First Amendment by limiting the company’s ability to implement diversity and inclusion training.

“In contrast to other lawsuits challenging the act, FIRE’s suit is limited to higher education and does not take a position on the truth of the prohibited concepts of race and sex,” FIRE said in a press release. “Rather, FIRE takes the viewpoint-neutral approach that faculty retain the right to give an opinion — whether that opinion supports or opposes the prohibited concepts in the Stop WOKE Act.”

The lawsuit seeks a declaratory judgment that the provisions added to Florida law by the Stop WOKE Act are unconstitutional under the First and Fourth Amendments and barring the Board of Education from enforcing the law against the plaintiffs.

Representatives from the Department of Education did not immediately respond to Law&Crime’s request for comment.

[Picture of Rechek and Novoa provided by FIRE; image of DeSantis via ABC Action News screengrab.]