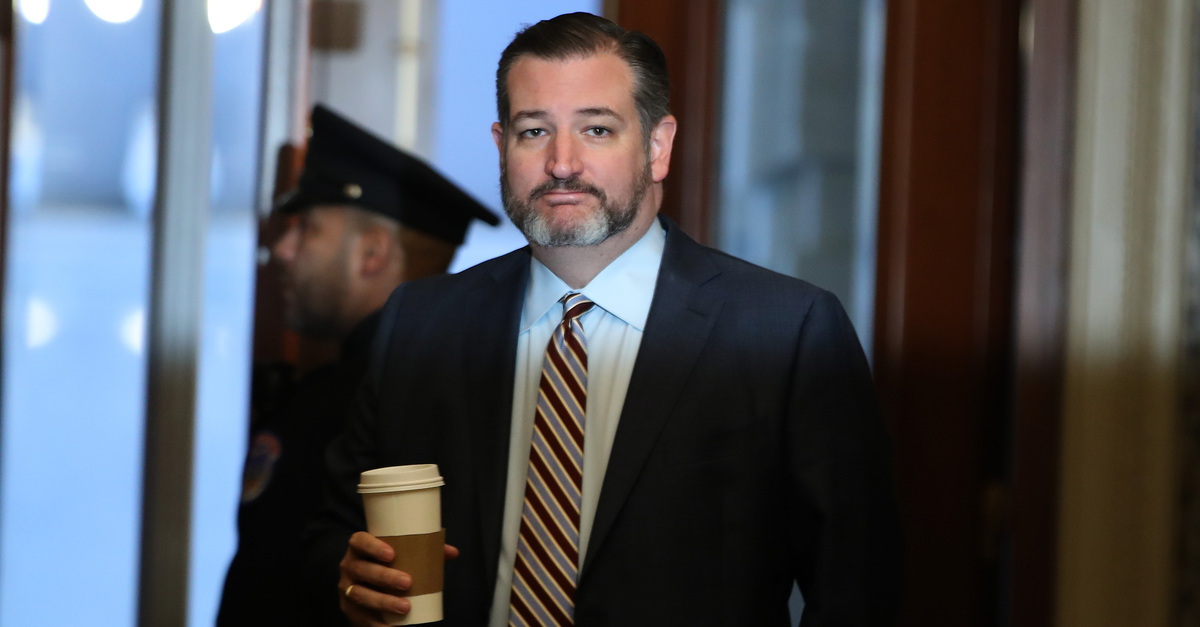 Federal prosecutors charged a Maryland man who allegedly threatened to kill Sen. Ted Cruz (R-Texas) in profane messages calling the senator the “Zodiak Killer,” misspelling the internet meme positing a resemblance between Cruz and the sketch of the man behind the most famous unsolved murder case in U.S. history.

Justin Kuchta, a 39-year-old from the state’s capital of Annapolis, used a government computer and a virtual private network to send the his first missive via Eventbrite in July.

“Thank you for the address!!!” the July 19th message said, according to the criminal complaint. “I’m coming to murder all of you Satanist fuckers!!! Especially the chuckle-fuck Zodiak [sic] Killer [Member of Congress 1]!! That fat fake fucker ass will be the first on the gallows!! SEE ALL OF YOU FUCKERS REALLY SOON!!! With my fresh militia and weapons!!! Thanks for the info fuckers!!!”

Though the complaint shields the name of the lawmaker, it identifies him as being from Texas and doesn’t shield the taunting nickname.

Three days later, Kuchta allegedly sent a follow-up message on Eventbrite: “WE ARE COMING FOR CHUCKLEFUCK ZODIAK [sic] KILLER [Member of Congress 1]!!! THANKS FOR THE ADDRESS AND INVITE, SEE YOU ALL SOON ENOUGH!!!”

The District of Maryland’s U.S. Attorney Erek L. Barron said his office remains vigilant in its response to threats against public officials.

“You have the right to your own opinions, but not the right to threaten a federal official’s life,” Barron said in a statement. “We’ll continue prosecuting these threats to the fullest extent of the law.”

Prosecutors say that Eventbrite provided the IP address used to send the message via an emergency disclosure request, which matched that of a private high-speed network operated by the state of Maryland.

Staff for that company, networkMaryland, told authorities that the address originated from a VPN, used to disguise internet traffic, and a computer assigned to Kuchta, according to the complaint.

“Initially, Kuchta denied sending the messages,” the complaint states. “Later during that interview, after being advised that it was a federal crime to lie to a federal law enforcement officer, Kuchta admitted sending the July 18, 2022 threat. During the interview, Kuchta stated that he was working at home on his government-issued computer on July 18, 2022, and that he sent the Eventbrite message on that date.”

As Vox reported, the Zodiac killer murdered at least five people in the late 1960s and early 1970s — and is considered a leading suspect in at least four other murders. Cruz was born two years after the serial killer’s first murder, but it hasn’t stopped the senator from poking fun at the meme on Twitter.

“Happy Halloween,” Cruz wrote on Oct. 31, 2018, attaching cryptic messages in the style of the killer.