Former Alaska Governor and former vice presidential candidate Sarah Palin (R) get a major procedural win in her defamation lawsuit against the New York Times on Friday. Senior U.S. District Judge Jed S. Rakoff allowed the case to head to trial, ruling in a memorandum opinion that there is “sufficient evidence to allow a rational finder of fact to find actual malice by clear and convincing evidence.”

Back in Dec. 2019, Palin filed an amended complaint in her defamation lawsuit against the New York Times.

“Gov. Palin brings this action to hold James Bennet and The Times accountable for defaming her by falsely asserting what they knew to be false: that Gov. Palin was clearly and directly responsible for inciting a mass shooting at a political event in January 2011,” the 52-page filing began. “Specifically, on June 14, 2017, The Times published an editorial authored in the name of its Editorial Board (which represents the “voice” of The Times) that falsely stated as a matter of fact to millions of people that Gov. Palin incited Jared Loughner’s January 8, 2011, mass shooting at a political event in Tucson, Arizona.”

James Bennet no longer works at the Times, but not because of the Palin lawsuit. He resigned after the paper of record published an op-ed by Republican Sen. Tom Cotton (R-Ark.), headlined, “Send In the Troops.” The op-ed was published after the Minneapolis police killing of George Floyd sparked nationwide protests and violence in numerous cities.

Palin’s lawsuit was originally filed less than two weeks after the aforementioned editorial was published. After over two years’ worth of procedural wrangling back-and-forth, victories and setbacks on both sides, a federal court in New York City developed a case management plan stipulating the substantive pre-trial procedures in mid-Dec.2019. Palin’s amended pleading was filed in line with the rules laid out by Judge Rakoff.

Law&Crime previously reported on the newspaper’s failed efforts to have the case reheard by the full Second Circuit Court of Appeals. A three-judge panel of the same court resurrected Palin’s defamation claim in August citing an “unusual method” employed by the Southern District of New York (SDNY) to originally dismiss the case.

“The primary author of the defamatory passages in the Palin Article, James Bennet, is a seasoned journalist and editor with decades of experience who served as the Editor-In- Chief of The Atlantic at the time of the Loughner Shooting,” the filing continues. “When Mr. Bennet wrote and The Times published the defamatory passages in the Palin Article, they had actual knowledge that there was no direct and clear link between Gov. Palin and the Loughner Shooting and that Gov. Palin did not politically incite Loughner’s horrific crime.”

At the time of that mass shooting, several online commentators noted that Palin’s political action committee SarahPAC had recently released an advertisement that superimposed artificial crosshairs on congressional districts held by Democrats. One such district was Arizona’s 8th–at the time held by then-representative Gabby Giffords, who would suffer extreme and life-altering injuries due to the shooting.

According to Judge Rakoff, when viewing the evidence in the most favorable way to Palin, Bennet ignored evidence and “ultimately made the point he set out to make in reckless disregard of the truth.” 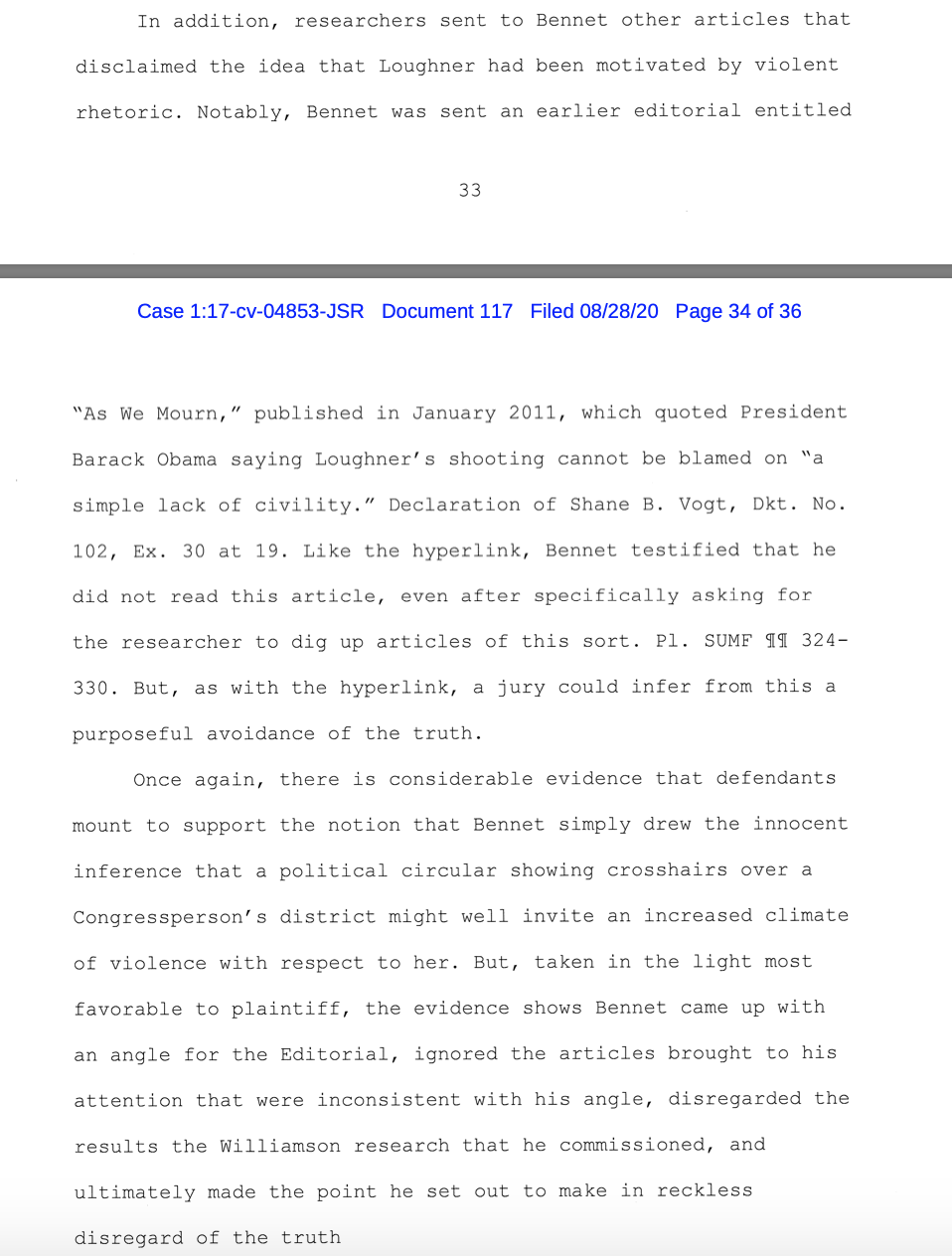