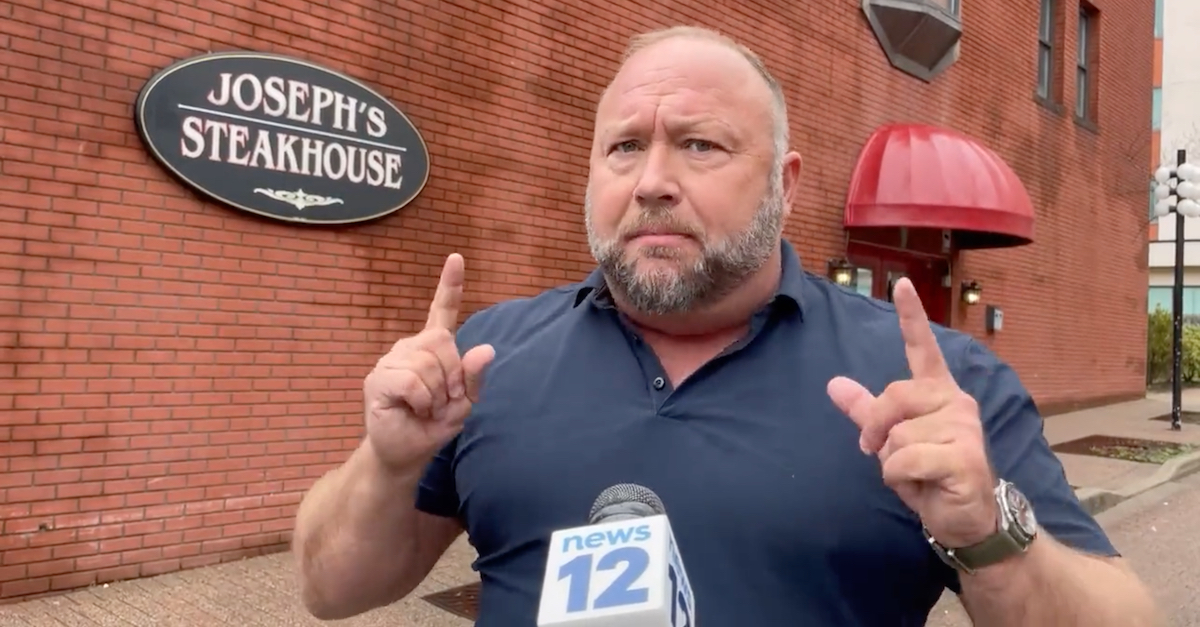 Attorneys for several of the plaintiffs in a Connecticut defamation lawsuit against InfoWars host Alex Jones and several associated entities have asked a judge to allow them to elicit testimony about “white supremacy” and “right-wing extremism” in a swiftly approaching trial.

Jury selection is scheduled to begin in early August — and testimony will commence in September — to determine the degree of damages suffered by the families of some Sandy Hook school shooting victims as a result of Jones’ original claims that the shooting was a hoax. A judge already entered a default judgment of defamation against Jones last November — largely because Jones didn’t comply with discovery procedures.

Jones has since walked back the conspiracy theories.

As Law&Crime reported last week, Jones asked a judge to ban “the introduction of evidence on the topics of white supremacy and right-wing extremism” as inadmissible character evidence. The plaintiffs objected on Monday.

The plaintiffs unfurled the argument by positing that presenting such evidence to the jury would not be “unduly” prejudicial to Jones:

In this case, the plaintiffs will present evidence that Jones claimed the Sandy Hook shooting was a government hoax in order to increase his audience and his sales. Falsely portraying the shooting as a government hoax enabled him to reach, retain and grow the extremist anti-government segments of his audience and to energize that audience by fomenting fear about government overreach. As Jones knew, a significant portion of his audience was comprised of a spectrum of groups opposed to the government, including white supremacists and anti-government extremists. These segments of his audience were uniquely receptive to the false Sandy Hook hoax narrative and likely to be active online and offline in responding to his claims. The ecosystem in which Jones’ lies took root and proliferated is vital context for the jury’s understanding of the nature and extent of the harm suffered by the plaintiffs.

In his deposition, Alex Jones testified that he conveys to his audience that “there is a group of international media financial and political elites that are conspiring to establish a global tyrannical government to enslave and ultimately kill people.” He further admitted that he has conveyed to his audience that one way this alleged cabal has “tried to achieve world domination is through what [he] call[s] false flag attacks,” e.g., the Sandy Hook shooting. In describing how he inspires his audience, Alex Jones testified that he is the “tip of the spear” and a “precision guided munition” preparing the ground for his audience to then charge behind him.

The plaintiffs say the evidence will inform the jury “about the meaning, effect, spread, and intent behind the Jones defendants’ false statements.”

“[E]vidence concerning the full spectrum of Jones’ audience is important context for the jury in understanding the plaintiffs’ damages in a case where liability is not at issue,” the plaintiffs wrote.

“The defendants misapprehend the nature of the evidence. This is not impermissible propensity evidence under [Connecticut Evidence Rule] 4-5,” the plaintiffs wrote. “The plaintiffs do not offer this evidence to prove that Mr. Jones is a racist, and, therefore, consistent with that character, acted with racial animus in broadcasting his defamatory statements about the plaintiffs. That would be nonsensical given the facts of this case.”

The plaintiffs concluded their arguments as follows:

The plaintiffs will present detailed evidence about the history of Alex Jones’ broadcasts, his role as a media personality among extremist groups and audiences, how he communicates to those audiences, and motivates those audience, all in order to demonstrate the damages that flowed from his false statements about the Sandy Hook shooting. As such, the evidence should be admitted. To the extent that any specific questions about admissibility arise, the Court should address them during trial on a case-by-case basis.

The debate about white supremacy and right-wing extremism is one of several being hashed out in motions in limine — pretrial motions to settle evidentiary spats before the jury is seated.

Other motions in limine recently filed include a move by the defense to preclude discussions of gunmaker liability in connection with the Sandy Hook massacre, whether or not — and, if so, precisely how — the jury will learn about the default nature of the core defamation judgment against Jones, and whether or nor resolutions with former defendants can be discussed in the upcoming trial.

In a Tuesday status conference designed to handle several outstanding matters but not the bigger-picture motions in limine, Jones attorney Norm Pattis noted to Judge Barbara Bellis that his co-counsel Cameron Atkinson had moved to withdraw from the proceeding. When Bellis asked what had transpired to predicate the request, which originally cited a “fundamental disagreement” between Atkinson and Jones, Pattis said Atkinson was leaving the employ of his law firm on Aug. 4 and that Atkinson’s departure would likely truncate the analysis.

Bellis complained of the seemingly incessant additions to and withdrawals from the list of defense counsel in the matter but otherwise wished Atkinson well.

“I hate to use the expression ‘musical chairs,’ but it just reminds me of musical chairs with counsel,” Bellis said.

Later in the hearing, Pattis asked to withdraw a July 6 motion for attorney Federico Andino Reynal, Esq. of Texas to appear on Jones’ behalf.

Reynal’s injection into the Connecticut proceeding was characterized as an attempt to ameliorate or assuage the situation.

“I need him here for reasons that I don’t want to put on the record,” Pattis said on July 14. “I simply think in terms of trial management and my ability to get what – to get all the moving pieces in this case moving in the right direction at an appropriate time to deliver a trial within the timeframe that we have estimated, I need Mr. Reynal. And he is Mr. Jones’ choice.”

The plaintiffs responded in writing by noting that such requests are generally between the court and the attorneys seeking to appear but added more context in a brief July 18 document.

“The Court has been appropriately cautious in response to this application, given the shifting appearances of counsel in this case for strategic purpose and the Jones defendants’ repeated abuses of process in an effort to avoid trial,” the plaintiffs wrote. “It also seems potentially disruptive of the trial proceedings to have pro hac counsel appearing for part but not all of the trial.”

“If the Court grants the application, the plaintiffs ask that the Court specifically note in its order Attorney Pattis’s representations on the record to the effect that the Jones defendants waive any argument that the admission of Attorney Reynal is a basis for continuing the trial, as well as the fact that Attorney Reynal is seeking to appear for both Alex Jones and Free Speech Systems, LLC,” the plaintiffs continued.

During the July 14 hearing, Pattis scoffed at suggestions from the plaintiffs’ attorneys that the insertion of Reynal into the proceeding was somehow tactical. Either way, the matter appears to now be moot.

On Tuesday, Pattis asked the judge to rubbish the Reynal request and said Reynal wished to avoid the fees and taxes imposed on out-of-state counsel who appear for select Connecticut proceedings with judicial approval — a process known as “pro hac vice” admission.

Another defamation trial against Jones has already begun in Texas.

Sitting in Waterbury, Connecticut, Judge Bellis noted that she “could not escape” headlines Monday evening that indicated attorneys in the Lone Star State claimed Jones might not be present for some of the proceeding there because of alleged “medical issues.”

Bellis said she would “not permit” attorneys to utter off-the-cuff comments about the absence of any parties during the trial and wanted the issue addressed through stipulated language — presumably to be read by the court. Jones previously objected to attending every day of the trial due to the costs involved, Bellis noted.

“I have no idea what the truth is,” Bellis said as to the alleged “medical issues” in Texas.

“I do know that I was previously misled about Mr. Jones’ attendance or lack of attendance at his deposition, so what I will not have is any excuses by any party as to why their particular client is or is not attending,” the Connecticut judge said. “I will make it clear to the jury that they’re not to read anything into it and that parties are not required to attend.”

Read some of the motions in limine — which contain excerpts from Jones’ depositions in May — below.