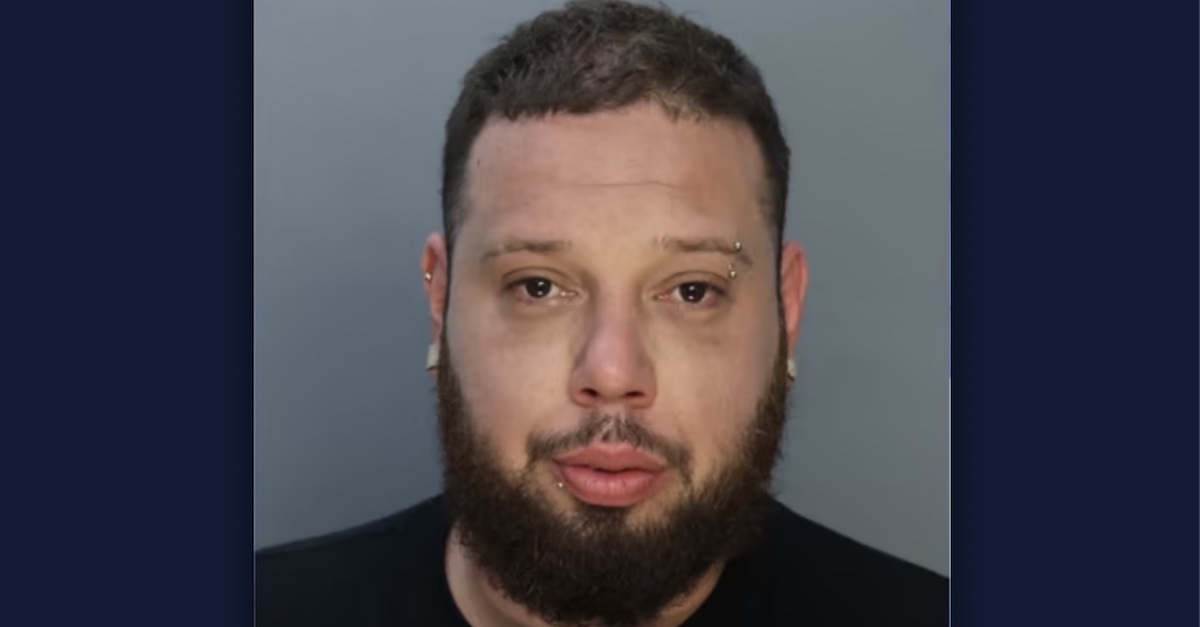 A Florida landlord was arrested over the weekend for allegedly shooting and killing his tenant inside of his rental apartment following a heated argument earlier in the night. Samuel Omar Gonzalez, 34, was taken into custody on Sunday and charged with one count of second-degree murder with a weapon for fatally shooting 27-year-old Armando Alvarez, court records reviewed by Law&Crime show.

According to a report from Miami ABC affiliate WPLG, the slaying occurred at a home located in the 1900 block of Southwest 125th Court. Gonzalez reportedly lived in the main home with his girlfriend while Alvarez rented an efficiency at the residence.

At approximately 10 p.m. on July 23, officers with the Miami-Dade Police Department and Emergency Medical Services personnel responded to a 911 call about a reported shooting at Gonzalez’s home. Upon arrival, officers reportedly found Alvarez unresponsive and “lying on the floor of the efficiency in a pool of blood,” according to WPLG. Authorities reportedly said that Alvarez had sustained a single gunshot wound to the head. He was pronounced dead on the scene.

A sworn affidavit obtained by the station reportedly provided details about the circumstances that motivated Gonzalez to allegedly shoot Alvarez in the head. Earlier in the day, Gonzalez, Alvarez, both of the men’s girlfriends, and one of Alvarez’s friends were “having a get-together” by the pool in the backyard of the home when Gonzalez and Alvarez got into an intense verbal argument. It is unclear what the two men were arguing about, but Alvarez reportedly decided to apologize to Gonzalez. However, when Alvarez tried to make amends, Gonzalez reportedly used an open hand to slap him in the face while the others in the yard all watched.

Following the slap, Alvarez, his girlfriend, and his friend reportedly all left the yard and returned to his efficiency. But Gonzalez wasn’t done with the altercation and reportedly armed himself with a .40 caliber handgun. A short while after the get-together broke up, Gonzalez entered the efficiency and allegedly used the handgun to fire shoot Alvarez in the head. Witnesses reportedly told police that Gonzalez then fled the scene in a white BMW 320i.

Officers with the Miami-Dade Police Department at approximately 1:38 p.m. on Sunday located Gonzalez’s vehicle and performed a traffic stop at NW 93 Avenue and 25th Street, The Miami Herald reported. Police then arrested Gonzalez without incident.

After being placed in the back of a police vehicle, Gonzalez allegedly became “emotional” and “confessed to killing his tenant and disposing of the gun used in the crime,” police reportedly said. Despite his alleged confession, after arriving at police headquarters and being read his Miranda rights, Gonzalez reportedly refused to speak with investigators and requested the presence of his attorney.

Court records indicate that he is being represented by Nicole Vera of the Miami-Dade Public Defender’s Office. Vera did not immediately respond to a message from Law&Crime seeking comment.

Gonzalez is currently being held at the Miami-Dade County Pretrial Detention Center without bond.

Several news outlets have reported that Alvarez rented the efficiency from Gonzalez’s girlfriend, but Det. Angel A. Rodriguez reportedly confirmed to the Herald that Gonzalez was Alvarez’s landlord.

Miami-Dade PD did not immediately respond to a message from Law&Crime.