‘Beyond the Bounds of Decency’: Parents of Toddlers Sue Trump Over Manipulated ‘Racist Baby’ Video He Tweeted 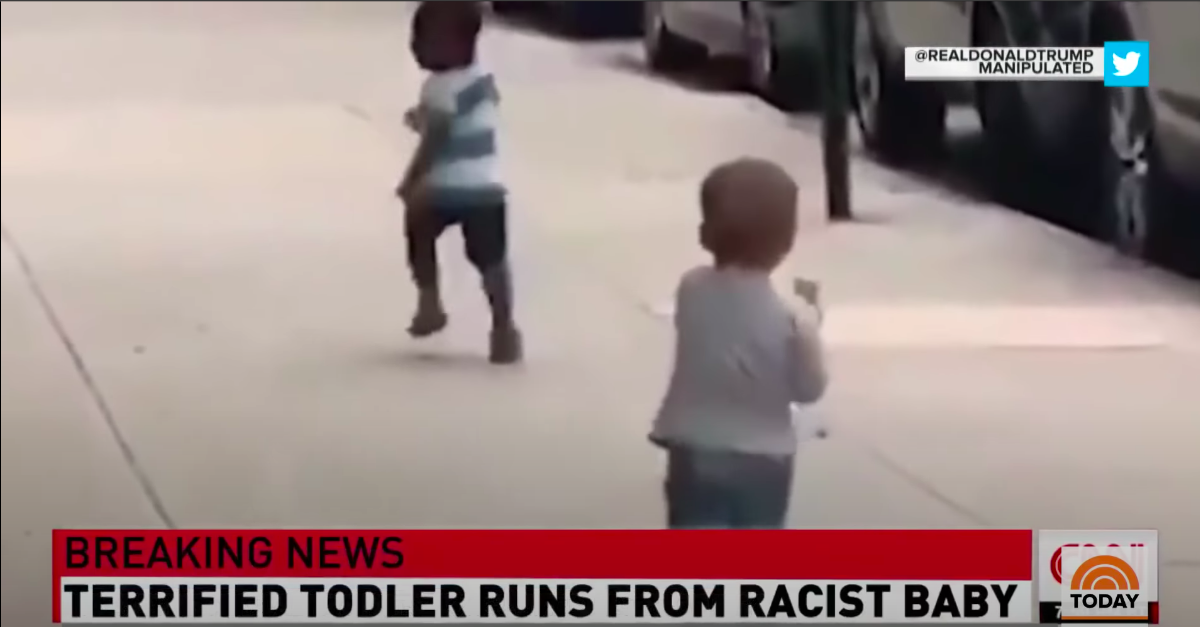 In June 2020, President Donald Trump tweeted a doctored video which was meant to look like it was aired by CNN and which purported to show a Black toddler running away from a “racist” white toddler. The chyron on the video read: “Terrified todler [sic] runs from racist baby,” followed by, “Racist baby probably a Trump voter.” The parents of the children filed a lawsuit on Thursday against Trump, his campaign, and the creator of video, Logan Cook, claiming that they published the “manipulated” video “knowing of its falsity” for the purpose of “commercial exploitation,” “economic benefit,” and to solicit donations to the Trump campaign.

The video was initially marked as “manipulated media” by Twitter before the social media platform disabled the tweet “in response to a report by the copyright owner.”

The lawsuit, filed in New York State Supreme Court by Michael Cisneros, Alex Hanson, and Erica and Daniel McKenna, accuses the defendants of unlawfully using the children’s’ images without consent, in violation of New York Civil Rights Law §50 and §51.

“All defendants owed a duty to Plaintiffs, so as to abide by the above laws and to refrain from using videos or likenesses of people without prior consent and to refrain from using the video for crass commercial exploitation and/or advertising purposes and/or as a solicitation for patronage in an attempt to raise or to make money,” the complaint stated. “All defendants flagrantly and knowingly violated these statutes in numerous regards but in particular in their failure to obtain written consent of the above Plaintiffs/parents before utilizing the video as well as utilized this stolen video as a method by which to advertise or for purposes of crass commercial exploitation, advertising, trade and/or make money for each of them individually, themselves collectively and/or for Trump and/or Campaign.”

The parents also accused the president, Cook, and the Trump campaign of the intentional and negligent infliction of emotional distress, as well as general negligence in failing to act reasonably by publishing the video.

“Defendants’ above described behavior is extreme, shocking and outrageous conduct, beyond the bounds of decency, which was intended to cause harm and/or disregarded a substantial probability of causing severe emotional distress to all of Plaintiffs,” the lawsuit stated. “As a direct and proximate result of defendants’ misconduct and wrongful actions, Plaintiffs have suffered injuries as a direct, rather than a consequential result, of the above breaches and have caused all Plaintiffs to suffer injuries, including but not limited to: Conscious pain and suffering and/or severe emotional distress; Mental anguish; Fright and shock; Denial of social pleasures and enjoyments; Embarrassment, humiliation or mortification.”

The lawsuit is seeking damages and an order directing the defendants to cease using the children’s images in the future.