Arizona Police Broke into Unarmed Schizophrenic Woman’s Home with Guns Drawn and Tased Her in Her Own Bedroom: Lawsuit 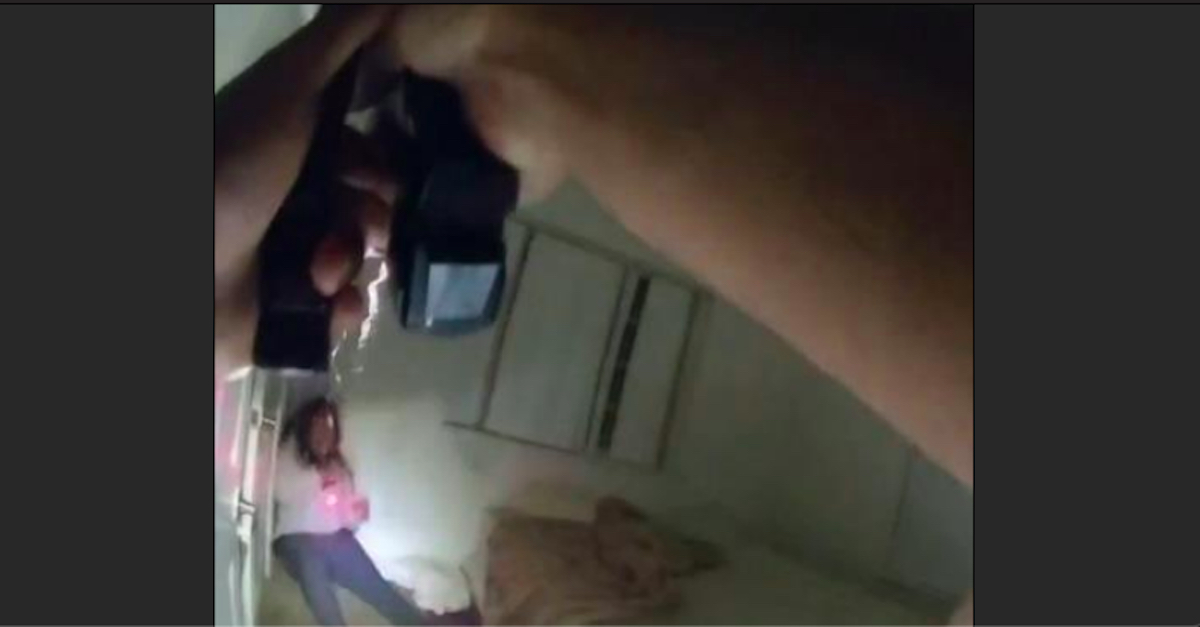 A trio of police officers in Arizona broke into the home of a woman they knew was mentally ill, held her at gunpoint, and tased her while she stood unarmed in her own bedroom, according to a federal lawsuit.

The case was filed last week in the U.S. District Court in Arizona by Lewis Williams, the father and legal caretaker for his daughter Memory Burns, who lives with schizophrenia. Burns was the woman who was tased. The lawsuit alleges that City of Globe police officers Jeffrey Overton, Matthew Ortiz, and Natalia Lomahoema violated Burns’ Fourth Amendment rights by unlawfully entering her apartment, falsely imprisoning her, and using unjustifiably excessive force against her in a manner that amounted to assault and battery. The City of Globe is also a named defendant in the action.

Per the complaint, just before midnight on Sept. 25, 2020, the officers responded to a call from one of Burns’ neighbors about “loud noises, banging sounds, and the possibility of a male and female arguing” in her unit. The officers knocked on the door but no one answered. One of the officers went to the back of the residence and saw that the door was closed but turned the knob and determined that it was unlocked.

Overton then saw movement coming from inside the apartment and allegedly ordered Lomahoema and Ortiz to open the back door, which they allegedly did.

The officers “saw and heard nothing to indicate that a crime had been committed or was being committed,” the complaint states; they neither saw nor heard anything indicating the occupant was “injured or in need of aid.”

While still standing at the back door, Ortiz and Lomahoema were approached by a uniformed trooper with the Arizona Department of Public Safety identified as D. Deatherage.

Deatherage allegedly informed the officers that the resident of the apartment was Burns, who he described as “1016,” which is police code for someone who is mentally ill. Deatherage additionally said that Burns “frequently had arguments with herself in which she used a voice that sounded like a male voice.”

During those two officers’ conversation with Deatherage, Overton was speaking with the neighbor who called in the complaint. Following that conversation, he ordered Ortiz and Lomahoema to enter Burns’ home despite not having a warrant and there allegedly being no indication of criminal activity.

Upon entering the home, the officers did not see anyone, so Overton allegedly ordered Ortiz to open the door to Burns’ bedroom.

The suit alleges that both Overton and Ortiz opened the door and “pointed their firearms at Memory.” The men then allegedly gave her “contradictory orders.” One told her to “come out,” and the other ordered her to put her hands on her head, the lawsuit says.

“Defendant Overton then yelled, ‘Drop her,’ which appears to be an order to Defendant Ortiz to shoot Memory,” the suit alleges. “Thankfully, Ortiz did not comply with this order.”

Memory then allegedly tells the officers their actions were “against the law.” The suit says she was unarmed, did not make any threats, and did not move toward the officers during the interaction.

“Defendant Overton then yelled, ‘I will Tase you,’ even though he had no right to be in the Unit, no probable cause to believe a crime had been committed, no right to arrest Memory, and she posed no threat to him,” the suit further alleges. “As Memory said, ‘Yeah, right,’ Defendant Overton Tased Memory. Memory fell to the ground screaming, ‘You’re killing me!’ and began calling for her dad and asked the Defendant Officers, ‘Why are you killing me?’”

The officers then allegedly said, “You’re under arrest for obstructing.”

“There is no crime of ‘obstructing’ under Arizona’s criminal code, and the Defendant Officers did not have probable cause to believe that Memory had committed any crime,” Burns’ attorney Joel B. Robbins wrote in the filing.

Burns is seeking unspecified punitive and compensatory damages as well as attorneys’ fees.

Neither Robbins nor the Globe Police Department immediately responded to an email from Law&Crime concerning the lawsuit.

According to a report from Phoenix ABC affiliate KNXV-TV, Police Chief Dale Walters last year apologized for the officers’ conduct and suspended Overton for using his Taser in violation of department policy. The report also said that Overton had “racked up misconduct cases including six police car crashes, sexual harassment of a co-worker, mishandled DUI investigations, failure to follow police procedure in a domestic violence case, and refusing to go to a call at a mental health facility.”