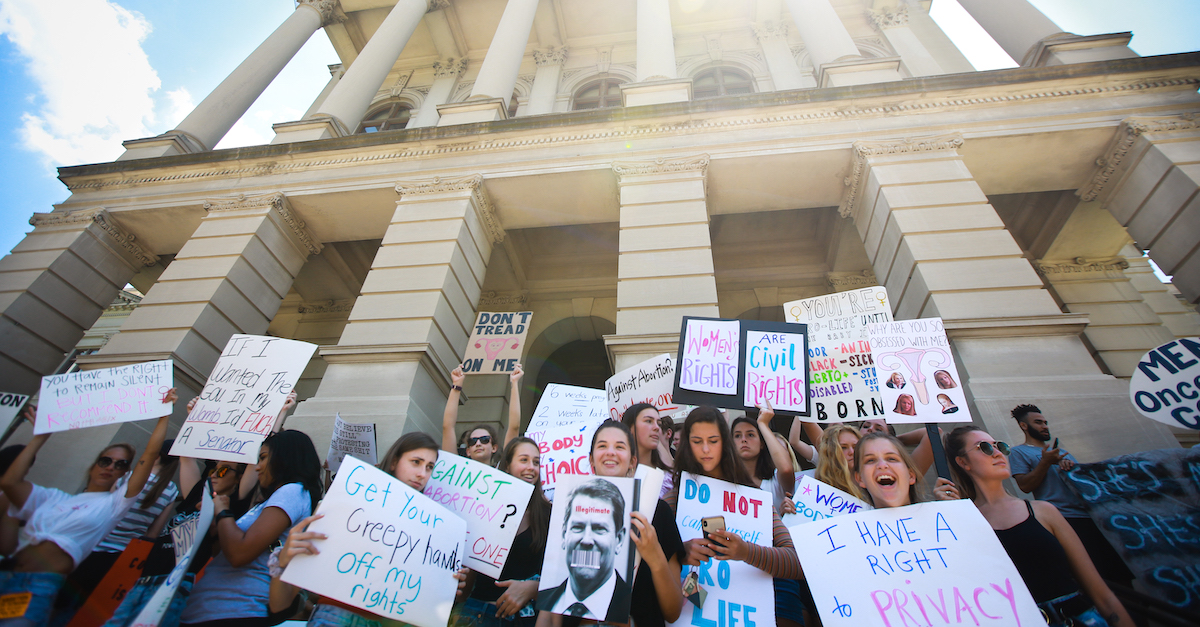 Young women from Paideia High School hold signs during a protest against recently passed abortion ban bills at the Georgia State Capitol building on May 21, 2019 in Atlanta.

The U.S. Court of Appeals for the Eleventh Circuit on Monday shut down a lawsuit which challenged a Georgia abortion ban. The reason? The Supreme Court is gearing up to hear arguments about a similar ban in another state.

The underlying law, House Bill 481 of 2019, stated plainly that “natural persons” (as defined elsewhere in state law) “include an unborn child.” The bill’s official title was the “Living Infants Fairness and Equality (LIFE) Act.” As Law&Crime previously explained back in 2020:

The bill, which Republican Gov. Brian Kemp applauded, cited the Declaration of Independence and the Fourteenth Amendment as the underpinnings of a state policy “to recognize unborn children as natural persons.” It provided legal protection to any “unborn child with a detectable human heartbeat” and banned abortions at that point in the gestation process, which generally occurs around six weeks.

The American Civil Liberties Union sued the state in 2019; a federal district court judge blocked the bill from taking effect because it “constitute[d] a pre-viability abortion ban and is therefore unconstitutional.” The state appealed, and the Eleventh Circuit — which is headquartered in Atlanta — heard oral arguments in the case on Friday. The Georgia law remains blocked from taking effect, and the Eleventh Circuit court shut down the process of considering the matter further with a terse order.

“We STAY this appeal pending a decision of the Supreme Court of the United States in Dobbs v. Jackson Women’s Health Organization, No. 19-1392 (2021),” the circuit court said on Monday.

Some critics immediately noted that the Eleventh Circuit’s decision to stay the Georgia litigation appeared predicated on the possibility that the U.S. Supreme Court could overturn Roe v. Wade.

This order, translated: “Under current precedent, Georgia’s six-week abortion ban is obviously unconstitutional. But we don’t like that precedent. So we’re going to keep this case on ice in the hope that the Supreme Court will overturn Roe, allowing us to uphold Georgia’s ban.”

The Supreme Court is, of course, scheduled to hear Dobbs on Dec. 1. That case questions the constitutionality of Mississippi House Bill 1510, also known as the Gestational Age Act. That statute effectively bans most abortions after about 15 weeks. Lower courts have blocked the law from taking effect citing Roe v. Wade and Planned Parenthood v. Casey. Mississippi claims Roe and Casey are directly contrary to the Constitution and should be overruled.

Roe and Casey say state governments cannot place an “undue burden” on a woman who seeks to terminate her pregnancy prior to the point at which the fetus is viable — that’s the point when it can survive outside the womb. Under Casey, an “undue burden” is a “substantial obstacle in the path of a woman seeking an abortion before the fetus attains viability.”

If the justices of the Supreme Court won’t overturn Roe and Casey completely, Mississippi has asked that the viability standard be jettisoned as a general rule:

This Court should reject a rule that a State may not prohibit any elective abortions before viability. Such a rule rests on flawed reasoning that has no constitutional or principled basis. It fails to accommodate state interests. It inflicts severe negative consequences. It is not well grounded in precedent.

No matter the value a State places on unborn life, it may never fully act on that judgment before viability. That is unsound.

Such a change would allow states like Mississippi to choose when to ban abortions — and Mississippi has already chosen 15 weeks. The Magnolia State is arguing before the Supreme Court that it can make that choice — not the person who is pregnant. Current abortion rights jurisprudence says state governments are powerless to make that choice; it is a woman’s choice alone — in consultation with her doctor.

The Supreme Court recently declined to block a separate abortion ban in Texas from taking effect on Sept. 1. That ban allows private individuals to sue abortion providers if they terminate a pregnancy after about six weeks of embryonic development.