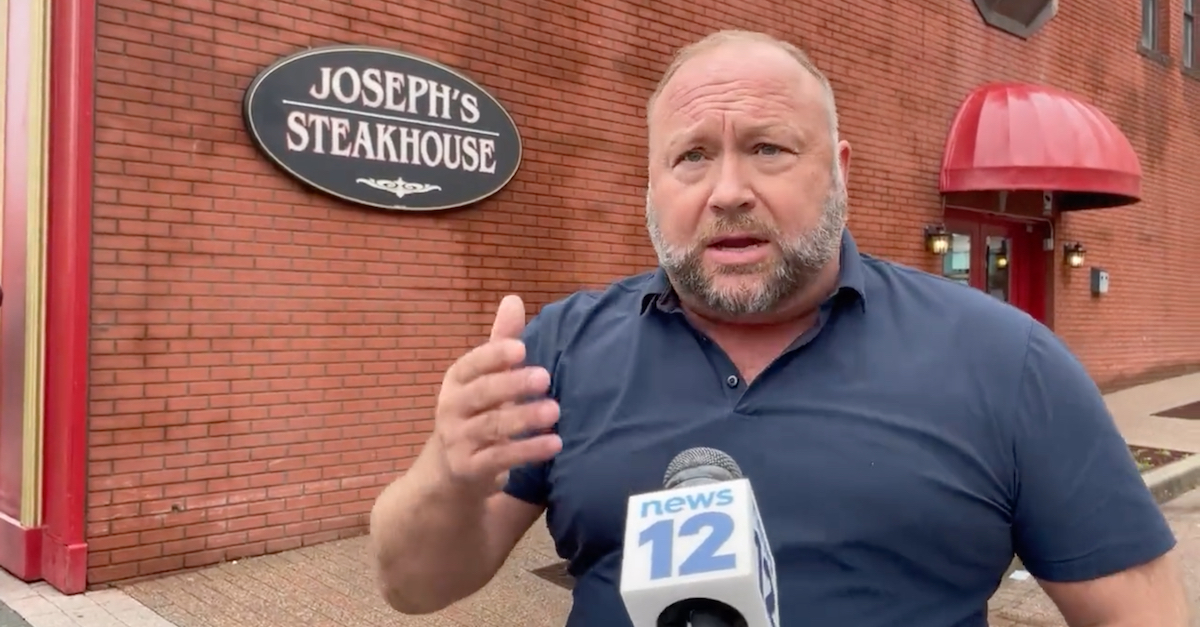 Conspiracy theorist Alex Jones must now pay some attorneys’ fees and costs to the families of Sandy Hook school massacre victims after the plaintiffs sent counsel and legal staff to Texas to take a deposition that Jones abruptly canceled earlier this year. That’s according to a concession (in part) and an order from a Connecticut judge (in remaining part).

The victims’ attorneys prepared for what Superior Court Judge Barbara N. Bellis referred to as the “aborted” deposition of Jones on March 23 and 24 and for several associated meetings, such as a status conference connected to Jones’s failure to appear.

Among the reimbursements requested by the plaintiffs’ attorneys were what one of their attorneys, Matthew Blumenthal, called “significantly” reduced hourly fees, travel expenses, and hotel rooms.  Blumenthal and co-counsel Christopher Mattei traveled from Connecticut to the Lone Star State to take the deposition in person; they were joined by a paralegal.

Bellis agreed to order Jones to pay for some, but not all, of those contested hours.

Cameron Atkinson, an attorney for Jones and some of his associated companies, conceded during a videoconference last week that Jones would have to reimburse $18,812.65 but fought against, according to some court paperwork, about $19,188.09 in other fees and expenses. The full, original claim by the plaintiffs was for a total of $39,157.76, according to another court document — and, yes, the numbers don’t quite add up; there was considerable back-and-forth about the valuation of the services rendered.

Atkinson said Jones made a “choice” to “afford himself more than” what was necessary in the representation department but that Jones was paying for the additional counsel out of his own pocket. Jones was not seeking to have someone else pay for his attorneys, Atkinson argued in an attempt to make a distinction.

Atkinson also suggested that the plaintiffs were seeking to “artificially inflate” hours and said additional explanations were necessary as to what some of the reimbursements would entail. It was generally mentioned that the plaintiffs’ attorneys and the plaintiffs’ paralegal had prepared questions, searched databases, reviewed “thousands” of documents, looked through several videos, examined “voluminous” additional records, and lined up logistics for the Texas depositions that never occurred.  The logistics included obtaining a videographer and a court reporter — the basic tools for the sit-and-talk.

“All the hours claimed by the plaintiffs are reasonable and sufficiently justified,” Blumenthal asserted during the hearing.

Atkinson balked that the expenses requested were “just estimates” and did not meet the particularities and sufficiencies necessary under Connecticut law.

“We need more information . . . that’s fairly stated and fairly described,” Atkinson said.  “These are just estimates — are they reasonable?”

When the parties discussed that some of the prep time was, in essence, “recycled” into the real depositions that did eventually occur in Bridgeport, Connecticut on April 5 and 6. Bellis said it would have been “negligent” for the plaintiffs’ attorneys not to prepare twice — or to significantly refresh their memories — given the complexity of the case.

At one point Bellis asked Atkinson whether reports which suggested Jones had spent $10 million on legal fees were true.  Atkinson said he did not know the extent of Jones’s finances and that what he did know was privileged.

The hearing concluded with a promise between the parties to attempt to work things out; that attempt was partially in vain.  After several discussions and adjustments which are memorialized in the record, Atkinson, after conferring with co-counsel Norm Pattis, wrote that Jones’s attorneys would prefer to “let the judge decide it.”

That resulted in the following breakdown from Bellis, which did not provide the plaintiffs everything they were seeking:

With respect to Ms. Seshadri, the Jones defendants agree that 4 of the 23 hours of work claimed are reasonable. Although the court recognizes that the 4 hours agreed to would not cover travel time, the court will not engage in speculation as to what the 23 hours claimed entailed as no description was provided. As such, the court will only award the 4 hours agreed to by the Jones defendants, as the court has no details regarding the work performed. With respect to Attorney Blumenthal, the Jones defendants agree that 2 of the 13 hours claimed are reasonable. In light of the evidence that Attorney Blumenthal spent the majority of the hours claimed preparing for the deposition of Mr. Jones, attended the March 23, 2022 court hearing, and attended both days of the canceled depositions, the court finds that all 13 hours claimed were for work reasonably performed. The attendant expenses of $2,023.09 claimed on behalf of Attorney Blumenthal for his involvement on 3/21/22, 3/22/22, 3/23/22, and 3/24/22 for hotel, flights, and travel are also awarded as Attorney Blumenthal’s participation on the legal team is reasonable. Finally, with respect to Attorney Mattei, the Jones defendants agreed that 4 hours of the 28.5 total hours claimed were for work reasonably performed. Here, the evidence establishes that Attorney Mattei participated in 3 1/2 hours of status conferences on 3/22/22 and 3/23/22, and attended the March 23 and March 24 canceled depositions. While the court recognizes that Attorney Mattei travelled to and from Texas, and engaged in deposition preparation, and accepts the evidence submitted that the claimed hours were underreported, the court has no further details. Based on the limited evidence presented, the court finds that the evidence supports a finding of an award of 15 hours, for attendance at the two status conferences, attendance at the two aborted depositions, and deposition preparation.

Jury selection in the damages portion of the defamation claim is scheduled to begin on Aug. 2, according to an online court docket. Additional hearings are scheduled for June 22 and July 5.

The lawsuit accused Jones of stirring up “false narratives about the Sandy Hook shooting and is victims” and of promoting “harassment and abuse” against the surviving families. It also accused Jones of engaging “in the perpetuation and propagation of [an] outrageous, deeply painful, and defamatory lie in the face of a mountain of evidence to the contrary, and with no supporting evidence” that the December 2012 shooting by Adam Lanza was a “hoax.”

A judge on Nov. 15, 2021 ruled that Jones failed to produce evidence sought by the defense during discovery and entered a default judgment against Jones — thus depriving him of the chance to fight the defamation allegations against him in a head-on manner. A jury will be assembled to assess damages only, the judge indicated at the time.

Read some of the relevant court documents below: