‘Their Plan Is to Literally Kill People’: Top 5 Bombshells from Secret Service Communications Obtained by the Jan. 6 Committee 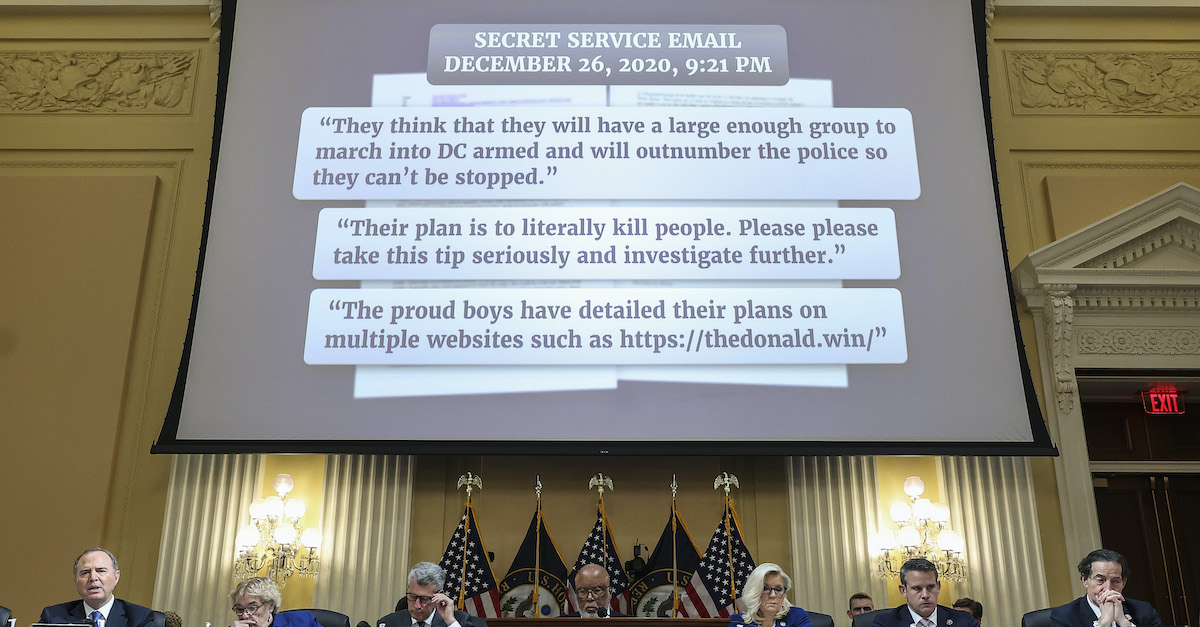 Excerpts of Secret Service emails are displayed during a hearing by the House Select Committee to Investigate the January 6th Attack on the U.S. Capitol in the Cannon House Office Building on Oct. 13, 2022 in Washington, DC. (Photo by Alex Wong/Getty Images)

For months, the Jan. 6th Committee has wrangled with the U.S. Secret Service to obtain messages relevant to their investigation, including texts erased on or immediately before the attack on the Capitol.

The messages that the committee did obtain, however, contained several bombshells that detonated steadily during its public proceedings on Thursday. They raise questions about the warnings the Secret Service obtained well before and during the day of the breach — and what, if anything, the agency did about them.

Here are five takeaways from the internal Secret Service communications revealed on Thursday. The agency did not immediately respond to a request for comment.

The Secret Service received several warnings of the threats of deadly violence on Jan. 6.

One message from a tipster quoted in a Secret Service email dated Dec. 26, 2020, reports the threat in stark terms: “Their plan is to literally kill people. Please please take this tip seriously and investigate further.”

Rep. Adam Schiff (D-Calif.) introduced the message during his presentation earlier in the proceedings.

According to the email, the tipster reported that those behind the plan believed that they could overrun the police during a march and noted that the Proud Boys detailed their plans on a pro-Trump website, which was linked to the message.

“Let’s pause here: The Secret Service had advanced information more than 10 days beforehand, regarding the Proud Boys planning for January 6,” Schiff said. “We know now, of course, that the Proud Boys and others did lead the assault on our Capitol building.”

Leaders of the Proud Boys and Oath Keepers have been charged with seditious conspiracy in connection with the Jan. 6 attack. The latter trial is ongoing.

The Secret Service had advanced warning of threats against Vice President Mike Pence.

A Secret Service briefing on Jan. 5, 2021, noted that there was “Chatter focused on Vice President Pence’s constitutional role as president of the Senate to preside over Congress’ acceptance of the Electoral College results on January 6.”

A message from the agency on the morning of the attack on 10:39 a.m. pointed to chatter from minutes earlier that Pence would be a “dead man walking if he doesn[‘]t do the right thing.”

Minutes later at 10:43 a.m., another message read: “I saw several other alerts saying they will storm the capitol if he doesn’t do the right thing etc.”

Secret Service whisked Pence away from the floor of the joint session shortly after 2 p.m., roughly a half hour after rioters overwhelmed police.

Secret Service observed that threats against Pence escalated after Trump sent a tweet attacking him as the breach of the Capitol was in progress.

In a chat dated Jan. 6 at 2:25 p.m., the Secret Service chronicled the fallout of Trump’s tweet slamming Pence while the mob enraged with the vice president ran riot inside the Capitol.

“POTUS just tweeted about Pence, probably not going to be good for Pence,” the chat said.

Even late in the evening, after the rioters left, Trump attacked his vice president again.

“POTUS said he lacked courage. Over 24k likes in under 2 mins,” read one Secret Service message from 7:28 p.m.

The Secret Service noted Trump’s anger at his allies’ losing their last-ditch election challenge before the Supreme Court.

Earlier in the proceedings, Cassidy Hutchinson, a former aide to Trump’s chief of staff Mark Meadows, had been seen testifying in a taped deposition that Trump was “just raging” after the Supreme Court rejected his allies’ case.

A message from a Secret Service agent backs up Hutchinson’s account.

Hutchinson memorably testified earlier this year that she had been told that Trump tried to take over the wheel when Secret Service agents drove him away from the rioters he wanted to join. Some in the Secret Service, and Trump supporters, hotly disputed her account at the time, but the new message burnishes her credibility.

In their ongoing trial, Oath Keepers members are facing seditious conspiracy charges that, in part, involve a plan to form a “quick reaction force,” or QRF, of militia members waiting on standby in Virginia if Trump called them to bring firearms into Washington.

The Secret Service messages suggest the agency also knew of that plan.

Another message that day describe the QRFs the same way prosecutors describe them in court documents: “Standing by at the ready should POTUS request assistance.”