‘Scare the Hell Out of Them … Should Do the Trick’: Oath Keepers Jurors Shown Planning, Recruiting Messages from Florida Leader Ahead of Jan. 6 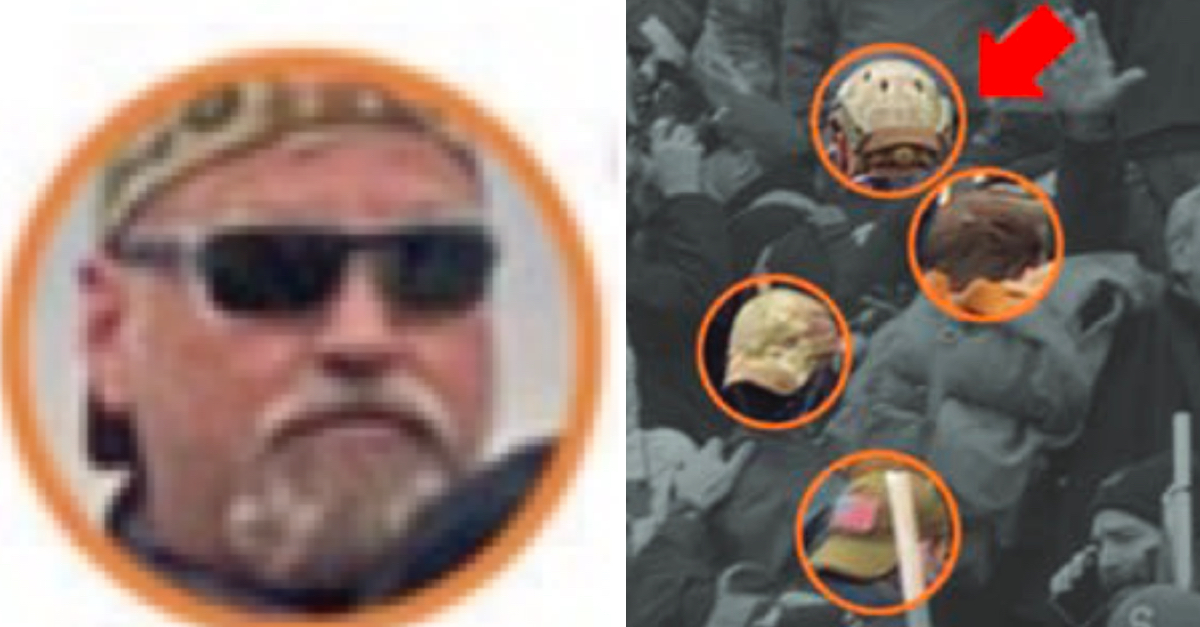 Kelly Meggs in a social media profile picture (left) and as part of the “stack” of members of the Oath Keepers militia group approaching the Capitol on Jan. 6 (right) (via DOJ court filings)

Jurors in the high-profile case against Oath Keepers members charged with seditious conspiracy in connection with the siege at the U.S. Capitol saw messages from the group’s Florida leader on Thursday, as prosecutors sought to support the theory that top leadership recruited and prepared for violence in Washington, D.C. ahead of Jan. 6.

Testimony from FBI Special Agent Kelsey Harris on Thursday morning highlighted messages from Kelly Meggs, who led the Florida chapter of the Oath Keepers militia-style group, in the days and weeks leading up to Jan. 6, when supporters of Donald Trump overwhelmed police forces and stormed the U.S. Capitol building in an attempt to stop Congress from certifying the Electoral College vote and Joe Biden’s 2020 electoral win.

Meggs is charged alongside Oath Keepers founder Stewart Rhodes, as well as co-defendants Jessica Watkins, Thomas Caldwell, and Kenneth Harrelson, with seditious conspiracy and other crimes; prosecutors allege that they plotted for weeks to forcibly stop the transfer of power and even planned to bring a cache of weapons to the Capitol.

Many of the messages that prosecutor Louis Manzo reviewed with Harris appeared to support the prosecution’s theory that Oath Keepers leadership, including Meggs, had their sights set on Jan. 6, 2021, and recruited members to help them carry out a potentially violent plan.

In late November, for example, Meggs had reserved a hotel room at a Quality Inn in Florida in connection with an “unconventional warfare” course. Reservation records showed that Meggs, along with Jeremy Brown — who has been linked to an explosives-laden RV that was allegedly brought to the Washington area around Jan. 6 — and co-defendant Joseph Hackett.

“We need to surround the Capitol all the way around with Patriots screaming so they hear us inside!” Meggs wrote to the OK FL chat. “Scare the hell out of them … should do the trick.”

Also on Dec. 23, 2020, Meggs posted a picture of an Oath Keepers flag with the message: “These will be flying Jan 6th in front of the Capitol!!”

Meggs again seemed to indicate his readiness for violence on Dec. 25, 2020, when he posted a response to a message from Rhodes.

“We need to make those senators very uncomfortable with all of us bing a few hundred feet away,” Rhodes wrote in the chat. “Our peaceful protests need to have a little more teeth[.]”

“There’s gonna be blood in the streets no matter what[,]” Meggs wrote, apparently as a response to Rhodes.

On Dec. 30, 2020, Meggs shared a link to a video from Rumble, a video platform popular on the right, along with a message.

“I’m not making suggestions in any way,” Meggs wrote. “But this was sent as an FYI.”

The video featured a man wearing a Trump hat, speaking into a headset microphone, and encouraging Trump supporters to travel in large, armed groups to Washington, D.C. starting around Jan. 2 in order to arrive there by Jan. 4, 2021.

In a message dated Jan. 1, 2021, Meggs says it’s possible that the group may not be able to act “defensively” on Jan. 6. Recalling that “defensive” has become a buzzword in this trial — defendants say the QRF was for defensive use only — Harris confirmed that the opposite of defensive is offensive.

Also on Jan. 1, 2021, Meggs posted to the DC OP Jan. 6 21 group his plans to bring an Oath Keepers flag “on a nice thick piece of wood.” He punctuated his message with an emoji of a tree stump.

“That will be enough for me,” Meggs added. “Hacksaw Jim Duggan style.”

Jim Duggan is a professional wrestler whose promotional picture, introduced into evidence by Manzo, shows Duggan shirtless, wearing only blue trunks, and wielding an American flag and a 2×4 plank of wood. Harris, in an amused voice, said that Duggan uses the flag to attack his opponents.

The jury also saw an image Meggs posted to Facebook that defense counsel had hoped to keep out of evidence. On Dec. 23, Meggs shared a meme of a guillotine — a mechanism that causes death by beheading — fashioned as an advertisement for Home Depot, along with a suggestion of how to spend a $600 Covid-related stimulus.

Also on Thursday, jurors saw what appeared to be an endorsement of the tactics used by QAnon adherents who espouse a complicated conspiracy theory that Trump is the leader of a fight against a worldwide cabal of cannibalistic pedophiles.

Before agent Harris’ testimony started on Thursday morning, U.S. District Judge Amit Mehta ruled on an issue that had been looming over the trial: whether communications between Rhodes and Kellye SoRelle — a lawyer who has declared herself the de facto leader of the Oath Keepers facing her own Jan. 6 conspiracy charges — were protected by the attorney-client privilege.

Lawyers for the defendants had argued that they were, in an attempt to keep the jury from seeing the witnesses. Prosecutors argued that the defense attorneys hadn’t sufficiently shown that an attorney-client relationship had been established, so the privilege shouldn’t apply.

Mehta agreed with the prosecutors.

In issuing his ruling from the bench, Mehta said that the issue was actually “fairly straightforward,” and that caselaw has clearly established that only communications seeking legal advice from an attorney acting in that capacity are protected. Consulting with someone who is a lawyer, Mehta said, doesn’t automatically amount to such communication.

The judge determined that a series of messages between Rhodes and SoRelle in late December were “personal” and not privileged. He also found that emails between SoRelle, Rhodes, and two political consultants were similarly not protected.

It was not immediately clear when the jury would see those communications.