‘Let Them Come in’: Trump Knew Mob Was Armed But Wanted to Stop Security Screening on Jan. 6, Chief of Staff’s Top Aide Testifies 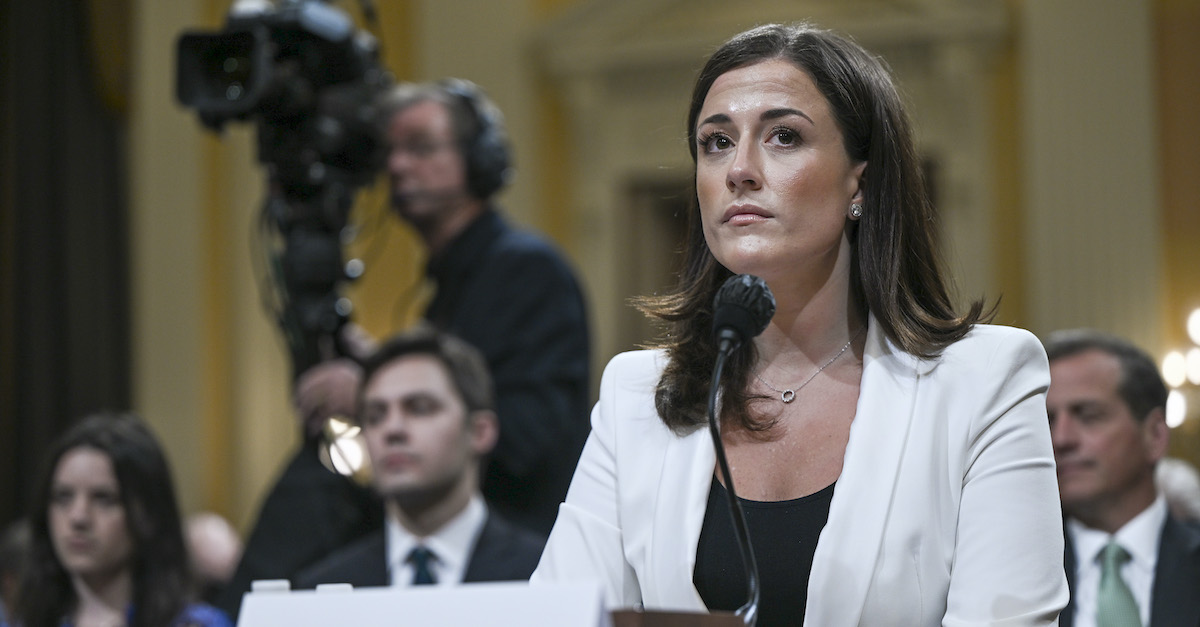 Cassidy Hutchinson, a top former aide to Trump White House Chief of Staff Mark Meadows, testifies during the sixth hearing by the House Select Committee on the January 6th insurrection in the Cannon House Office Building on June 28, 2022 in Washington, D.C.

In stunning testimony before the House committee investigating the Jan. 6 attack on the U.S. Capitol, a top aide to former White House Chief of Staff Mark Meadows said that then-President Donald Trump demanded that his supporters — some of whom were believed to be carrying weapons — be allowed to enter the space where he was holding his so-called “Stop the Steal” rally because he knew they weren’t there to hurt him.

Cassidy Hutchinson told the House Select Committee on Tuesday that as the increasingly riotous crowd grew at the Ellipse for the rally, in which Trump encouraged his supporters to march to the Capitol building and stop Congress carrying out its Constitutionally-mandated certification of the results of the 2020 election, Trump appeared unafraid, and was in fact insistent that the protestors get their way.

“Take the f’ing mags away,” Hutchinson recalled Trump saying. “They’re not here to hurt me. Let my people in.”

“Mags” is an apparent reference to magnetic security screening devices that are normally used to detect weapons and other devices.

Committee Vice Chair Liz Cheney (R-Wyo.) asked Hutchinson whether she took Trump’s comments to mean that he knew that “the armed individuals were not there to hurt him.”

Hutchinson’s testimony dovetails with the committee’s prior assertion that Trump allegedly suggested that supporters who were calling for the death of then-Vice President Mike Pence may have had the “right idea.”

Hutchinson also relayed conversations she had with Trump attorney Rudy Giuliani and Meadows in the days ahead of Jan. 6.

Hutchinson said that as she and the former New York mayor were walking, he asked if she was “excited” about Jan. 6. When she asked what he meant, Giuliani said it they were “going to the Capitol” and that it would be a “big day,” adding that Trump would be there and he would “look powerful.”

“Talk to the chief about it,” Giuliani reportedly told Hutchinson, apparently referring to her boss. “He knows about it.”

After parting ways with Giuliani, Hutchinson said she did just that, heading over to Meadows’ office. She recalled leaning on the doorway and saying she had an “interesting” conversation with Giuliani.

Meadows, Hutchinson said, was sitting on his couch, scrolling through his phone. He didn’t look up, but he did speak.

That, Hutchinson said, was the first time she started to feel scared about what could happen.

“I had a deeper concern for what was happening” with the plans for that day, Hutchinson said. Those concerns grew on Jan. 6 itself, as Hutchinson described a series of encounters with her then-boss that appear to corroborate the committee’s assertion that Trump may have been on board with the threats against Pence.

Specifically, as chaos reigned at the Capitol, Hutchinson said she heard White House Counsel Pat Cipollone tell Meadows that they needed to do more to quell the riot.

“You heard him,” Meadows said to Cipollone, telling him — apparently for the second time — that Trump did not want to take any action discouraging his supporters. “He thinks Mike deserves it. He doesn’t think they’re doing anything wrong.

Trump took to Twitter around that time, saying that Pence “didn’t have the courage” to do what the then-president had demanded and blocked the Electoral College certification. Hutchinson described the dismay she felt upon reading that tweet.

“As a staffer that works to always represent the administration to the best of my ability, to showcase the good things he had done for the country, I remember feeling frustrated, disappointed, and really, it felt personal. I was really sad,” she said. “As an American, I was disgusted. It was unpatriotic. It was un-American. We were watching the Capitol building get defaced over a lie.”

“It was something that was really hard in that moment to digest, knowing what I had been hearing down the hall in the conversations that were happening,” she continued. “Seeing that tweet come up and knowing what was happening on the hill, it’s something . . . I still struggle to work through the emotions of that.”

“Take Me Up to the Capitol Now!”

Tuesday’s hearing was another opportunity for the committee to attempt to link the former president directly to the chaos of the day — and to its planning. Early on in the hearing, Hutchinson said that she heard the phrases “Proud Boys” and “Oath Keepers” come up during meetings with Giuliani. The leaders of both extremist groups are charged with seditious conspiracy in connection with Jan. 6.

Hutchinson also testified that as the day itself unfolded, Trump was eager to be much closer to the violent mob than his security team would allow. At his so-called “Stop the Steal” rally held at the Ellipse, Trump had told his supporters he would go with them to the Capitol. He didn’t end up doing that — but apparently it wasn’t for a lack of trying.

According to Hutchinson, as Trump left the rally, he demanded that he be taken to the Capitol. When he wasn’t immediately appeased, Trump allegedly lunged toward the driver of the heavily-armored vehicle and tried to grab the steering wheel himself.

“I’m the f’ing president,” Trump reportedly yelled. “Take me up to the Capitol now!”

Hutchinson said that following this outburst, Trump then “reached up toward the front of the vehicle to grab at the steering wheel.”

At this, Robert Engel, a Secret Service agent and the then-head of Trump’s security detail, allegedly grabbed Trump’s hand and told him to take his hand off the wheel. Trump then turned on Engel himself, using his free hand to “lunge” toward the agent, Hutchinson said.

Hutchinson said that she learned about the altercation shortly after it happened from then-Deputy Chief of Staff Tony Ornato, who she encountered in the White House alongside Engel himself after returning from the Ellipse after Trump’s speech. She described Engel as looking “somewhat discombobulated, a little lost,” and noted that he did not say or do anything to contradict Ornato’s story as he relayed it to Hutchinson at that time.

Trump’s desire to join his supporters at the Capitol apparently went against Cipollone’s guidance. Hutchinson recalled a conversation with him days before Jan. 6, in which he asked her to help keep Trump away from the Capitol that day.

“Please make sure we don’t go up to the Capitol, Cassidy,” Hutchinson said, paraphrasing what Cipollone said. “Keep in touch with me. We’re going to get charged with every crime imaginable if we make that movement happen.”

“In the days leading up to the 6th, we had conversations about potentially obstructing justice, or defrauding the electoral count,” Hutchinson said.

Others in Trump’s inner circle were also apparently concerned about being criminally charged in connection with the Jan. 6 riot. Cheney asked Hutchinson if Giuliani, for example, had ever expressed interest in a presidential pardon for his actions relating to Jan. 6.

“He did,” Hutchinson replied.

“Did White House Chief of Staff Mark Meadows ever indicate he was interested in receiving a presidential pardon?” Cheney asked.

“He Wants Me to Let You Know That He’s Thinking About You. He Knows You’re Loyal.”

The hearing closed with Cheney offering evidence of attempted tampering and interference with witnesses asked to appear before the committee.

“While our committee has seen many witness, including many Republicans, testify fully and forthrightly, this has not been true of every witness,” Cheney said, adding that the committee has “received evidence of one particular practice that raises significant concerns.”

Cheney said that the committee normally asks witnesses connected to Trump’s administration or campaign whether they had been contacted by any former colleagues who attempted to influence their testimony.

The answer, in some cases, was yes.

“What they said to me is, as long as I continue to be a team player, they know that I’m on the team, I’m doing the right thing, I’m protecting who I need to protect, you know, I’ll continue to stay in good graces in Trump World,” one witness told the committee (as per a transcript posted on a video display board in the hearing room). “And they have reminded me a couple of times that Trump does read transcripts and just to keep that in mind as I proceeded through my depositions and interviews with the committee.”

The committee said another witness claimed to have received a call from someone else in the former president’s inner circle.

“[A person] let me know you have your deposition tomorrow,” that caller told the witness, according to Cheney. “He wants me to let you know that he’s thinking about you. He knows you’re loyal, and you’re going to do the right thing when you go in for your deposition.”

Cheney said that such actions were, at best, troubling.

“I think most Americans know that attempting to influence witnesses to testify untruthfully presents very serious concerns,” she noted, careful to avoid language accusing anyone of any actual criminal activity but noting that the committee will discuss its concerns and consider “next steps.”

Thompson followed Cheney’s warning with one of his own.

“I want to speak directly to witnesses who have been outliers [and] defied us outright,” Thompson said. “Those whose memories have failed them again and again on the most important details, and to those who fear Donald Trump and his enablers: because of this courageous woman and others like her, your attempt to hid the truth from the American people will fail.”

Thompson then issued an invitation to previously recalcitrant witnesses who might be reconsidering.

“To that group of witnesses: if you’ve heard this testimony today and suddenly you remember things you couldn’t previously recall, or there are some details you like to clarify, or you discovered some courage you had hidden away somewhere, our doors remain open.”

Editor’s note: This story has been updated to reflect that Donald Trump allegedly wanted his supporters, including those believed to be armed, allowed into the space where his “Stop the Steal” rally was held. A previous version of the story incorrectly said Trump wanted his armed supporters to be allowed into the Capitol building.