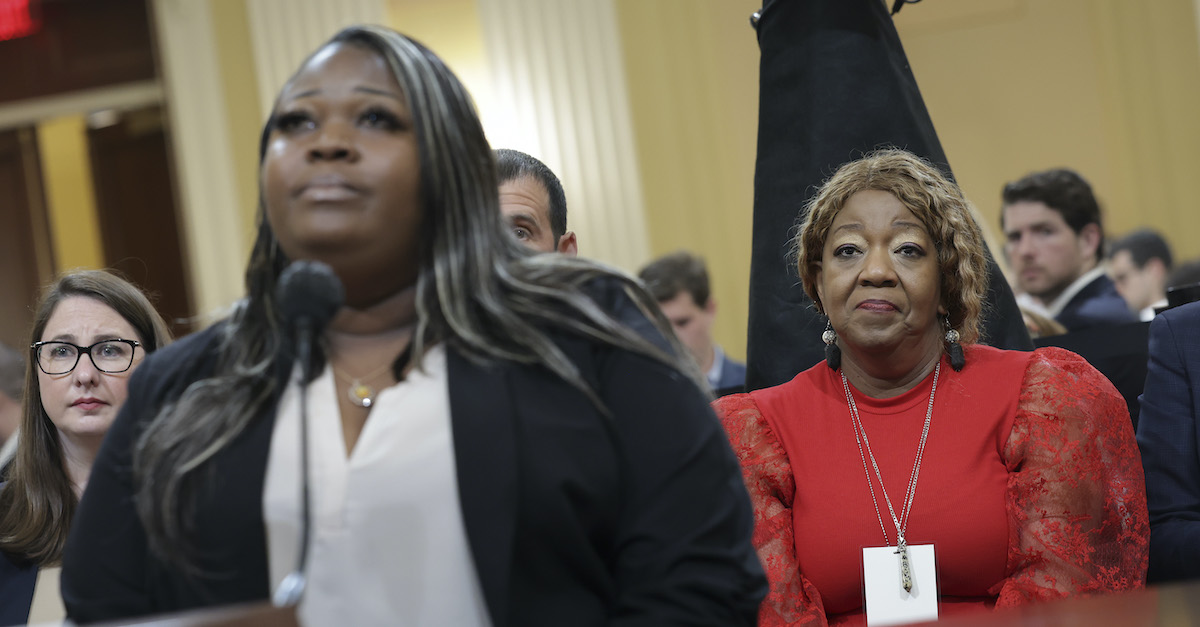 Rudy Giuliani tried to explain Donald Trump’s defeat by claiming in a video that a former Georgia election worker handed her mother “USB drives” full of votes, “as if they were vials of heroin or cocaine.”

“The President is supposed to protect every American, not target them,” said Ruby Freeman, the mother called out by name by Trump to explain his defeat. “But he targeted me, Lady Ruby, a small business owner, a mother, a proud American citizen who stood up to help Fulton County run an election in the middle of a pandemic.”

While video of her deposition played, Freeman sat behind her daughter Moss, a former election worker and recipient of the John F. Kennedy Profile in Courage Award. Both Moss and Freeman sued the right-wing One America News (OAN) Network and Giuliani in a federal court in Washington, D.C.

The case against OAN settled, but the one against Giuliani remains active. They told the Jan. 6 Committee on Tuesday about how they became “scapegoats” for Trump’s defeat in Georgia.

Moss said that she learned about Giuliani’s video when she was at work. The former chief called her to his office, along with the former director.

“They showed me a video on their computer. It was just like a very short clip of us working at State Farm,” she said.

As Moss recalled, someone talking over the video and “just lying” that she and her mother were doing something that they shouldn’t.

“That’s when I first found out about it,” she reflected.

A campaign of public harassment followed. Some of the taunts, Moss remembered, were racist, and others were “just hateful.” Both Moss and Freeman are Black women. Freeman recounted having to move after the FBI learned about certain threats against her.

The mother also spoke about how the campaign made her lose her identity.

“I wore a shirt that proudly proclaimed that I was—and I am—Lady Ruby,” Freeman said. “Actually, I had that shirt in every color. I wore that shirt on election Day 2020. I haven’t worn it since, and I’ll never wear it again. Now I won’t even introduce myself by name anymore.”

She recalled that it got to the point where she gets nervous when she has to give food orders.

The smear gained further traction after the publication of Trump’s infamous phone call with former Georgia Secretary of State Brad Raffensperger (R), whom the 45th president urged to “find 11,780” votes. Trump invoked Freeman’s name on that tape no fewer than 19 times, referring to her as “a vote scammer, a professional vote scammer and hustler.”

Trump rattled off various debunked conspiracy theories about the Georgia election, including his false claim that the mother and daughter used a water main break as an excuse to wheel in fraudulent ballots.

Raffensperger debunked the theories point-by-point during his testimony, where he testified that Trump’s pressure campaign sparked “sexualized” threats against his wife and a break-in at his daughter-in-law’s home.