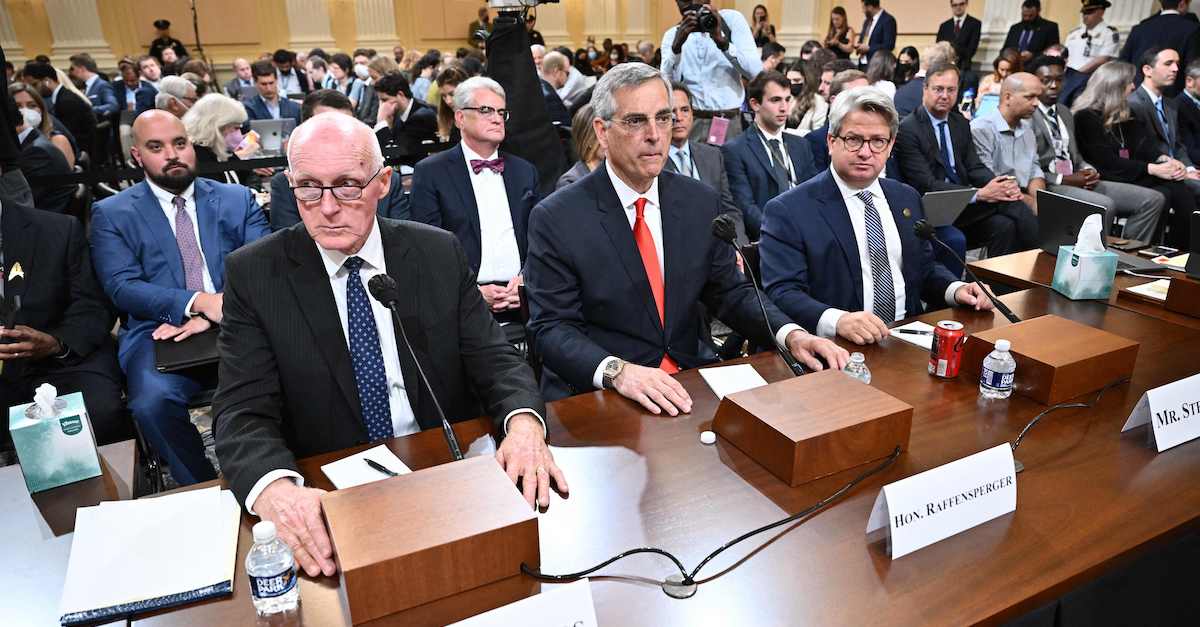 Arizona House Speaker Rusty Bowers (L), Georgia Secretary of State Brad Raffensperger (C), and chief operating officer for the Georgia Secretary of State Gabriel Sterling arrive to testify before the House Select Committee to Investigate the January 6th Attack on the US Capitol in the Cannon House Office Building on June 21, 2022 in Washington, D.C.

Donald Trump’s lawyer Rudy Giuliani privately admitted that the 45th president’s legal team had “lots of theories” about 2020 election fraud but no “evidence” to support a scheme to replace Joe Biden’s electors with Trump’s electors in states Trump lost, the Jan. 6 Committee heard in explosive testimony on Tuesday.

Rounding out the first panel was Arizona House Speaker Rusty Bowers, another Republican who resisted Trump’s effort to overturn his 2020 electoral defeat.

In emotional testimony, Bowers testified that Giuliani asked him to replace Arizona’s electors from Joe Biden’s victory with illegitimate pro-Trump electors and that the suggestion offended him to the core.

“It’s a tenet of my faith that the Constitution is divinely inspired — of my most basic, foundational beliefs,” Bowers said. “And so for me to do that because someone asked me to is foreign to my very being. I will not do it.”

Bowers said that Giuliani acknowledged that he had no basis for such an action.

As Bowers recalls it, Giuliani said: “We’ve got lots of theories; we just don’t have the evidence.”

Bowers said that he did not know whether it was a “gaffe” or if Giuliani just didn’t think it through, but he said he and other witnesses in his group recalled that comment.

Legal experts have opined that knowledge will be a crucial prong of any possible prosecution of Trump or his loyalists.

The committee chipped away further at that prong with testimony by Cassidy Hutchinson, an ex-aide to Trump’s chief of staff Mark Meadows. Hutchinson told the committee that the White House counsel knew that the fake electors scheme may have been illegal.

Former Trump campaign staffer Robert Sinners, one of those illegitimate electors, reflected: “We were just, you know, kind of useful idiots or rubes at that point.”

Jan. 6 Committee’s Chair Bennie Thompson (D-Miss.) drew a line between the previous hearing investigating Trump’s targeting of his ex-vice president Mike Pence and those against other officials across the country.

“In fact, pressuring public servants into betraying their oath was a fundamental part of the playbook,” Thompson said. “And a handful of election officials in several key states stood between Donald Trump and the upending of American democracy.”

“If you can convince Americans that they cannot trust their own elections, that anytime they lose it is somehow illegitimate, then what is left but violence to determine who should govern?”

After the first recess, the Committee turned to testimony by Raffensperger about his infamous phone call where Trump exhorted him to “find 11,780” votes. Thompson noted that Trump had a particular obsession with Georgia, where the Fulton County District Attorney opened an investigation into his attempt to overturn the election.

Sterling also testified about his press conference warning Trump that agitation over the election would get people killed.

“At this point, we had been steeping in this kind of stuff, so we were around it all the time,” Sterling said.

For Sterling, the “straw that broke the camel’s back” was coming across the threat against a young man that said: “You committed treason. May God have mercy on your soul,” accompanied by a “slowly twisting noose.”

On a separate panel will be Wandrea “Shaye” Moss, a former election worker who sued Rudy Giuliani and others for allegedly targeting her in a smear campaign so vicious that it forced her to change her appearance and go into hiding. Moss is a winner of the John F. Kennedy Profile in Courage Award.