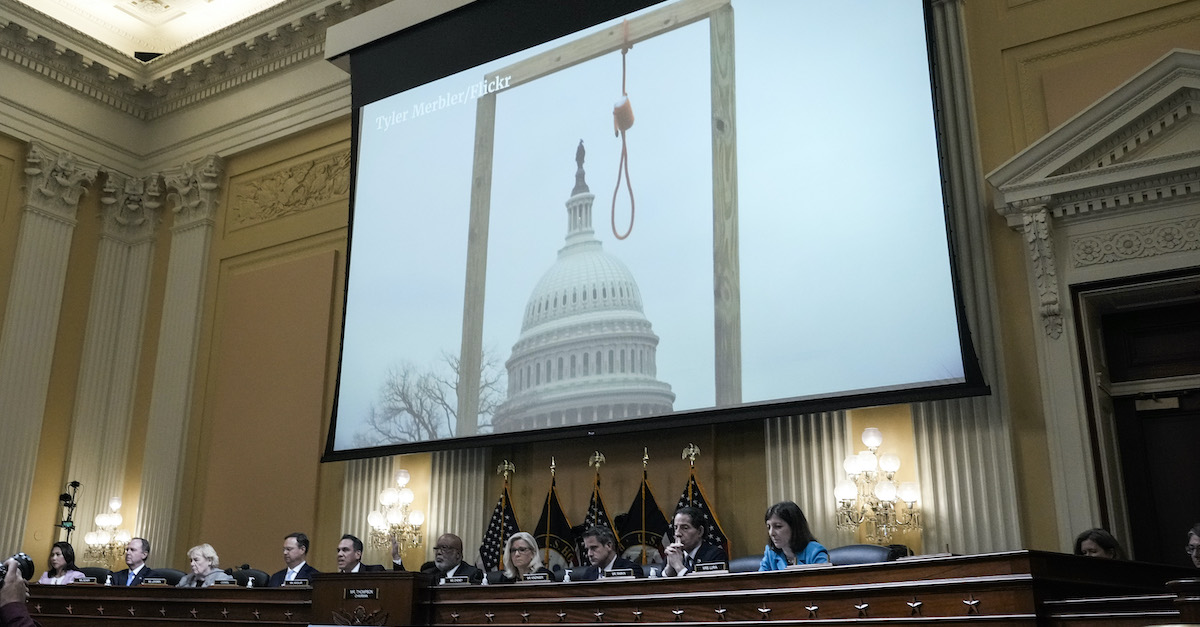 WASHINGTON, DC – JUNE 16: A noose is displayed as U.S. Rep. Bennie Thompson (D-MS), Chair of the Select Committee to Investigate the January 6th Attack on the U.S. Capitol, delivers opening remarks during the third hearing on the January 6th investigation in the Cannon House Office Building on June 16, 2022 in Washington, DC.

A retired conservative judge who told Mike Pence he lacked the power to block certification of the 2020 election unleashed a fiery speech excoriating former President Donald Trump before the Jan. 6th Committee on Thursday.

“A stake was driven through the heart of American democracy on Jan. 6, 2021, and our democracy today is on a knife’s edge,” retired Judge J. Michael Luttig’s excoriating prepared remarks began.

Appointed to the federal bench by George W. Bush, Luttig spent 15 years as a federal appellate court judge and was shortlisted—but never tapped—for the U.S. Supreme Court. He was known as a “feeder judge” because his clerks typically went on to serve conservative justices, and he personally clerked for the late Antonin Scalia.

With his lacerating testimony on Thursday, Luttig cements his place one of Trump’s harshest critics among the legal luminaries of the right. The speech does not mention the 45th president by name but makes unmistakable his belief that Trump “instigated and prosecuted” no less than an assault on U.S. democracy.

“In fact, January 6 was a separate war unto itself, a war for America’s democracy, a war irresponsibly instigated and prosecuted by the former president, his political party allies, and his supporters,” Luttig wrote. “Both wars are raging to this day.”

Luttig’s role in persuading Pence against attempting to block President Joe Biden’s victory was long known, trickling out into the pages of New York Times days after the attack. 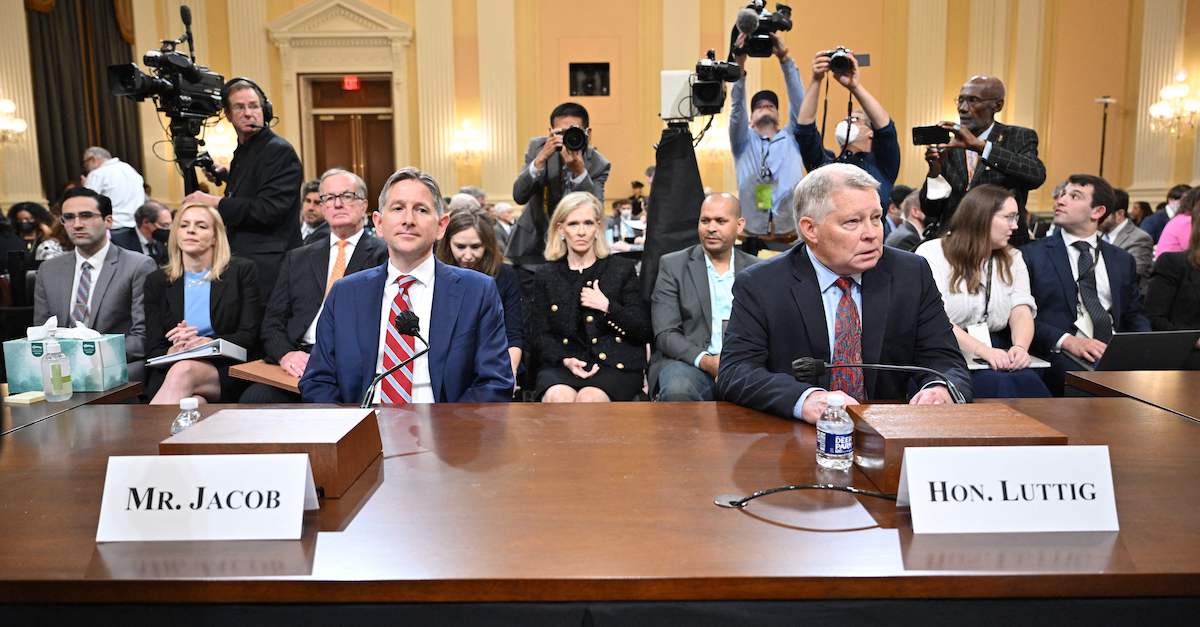 Former Counsel to Vice President Mike Pence, Greg Jacob (L), and Retired judge and informal advisor to Vice President Mike Pence, J. Michael Luttig (R), arrive to testify during the third hearing of the US House Select Committee to Investigate the January 6 Attack on the US Capitol, on Capitol Hill in Washington, DC, on June 16, 2022. (Photo by MANDEL NGAN/AFP via Getty Images)

The same report noted that Pence’s attorney Greg Jacob, the other witness at today’s hearing, echoed that advice.

Trump’s lawyer John Eastman, the author of the so-called “coup memo,” had been a point person in the plot to pressure Pence to purport to block certification of the election. Jacob’s resistance to that plan came into focus in an email correspondence with Eastman on the day of the attack.

Jacob did not hold back in his prepared remarks, either.

“The law is not a plaything for Presidents or judges to remake the world in their preferred image,” he wrote.

Though a group of conservative attorneys reportedly advised him—so-called “torture memo” author and University of California at Berkeley Professor John Yoo was one—Pence credited the father of the U.S. Constitution with the most profound advice, according to Jacob.

“When asked last year by a student at an event at the University of Iowa to name the person who told him he was required to certify the 2020 election, the Vice President accurately answered: James Madison,” Jacob noted.

Quoting another icon of U.S. history, Jacob turned to Alexander Hamilton’s statement that the Constitution does not make the “appointment of the President to depend on any preexisting bodies of men,” whom he warned might be subject to “cabal, intrigue or corruption.”

He emphasized that sentiment in his oral testimony to the committee.