Juneteenth: A New Federal Holiday with a Complex Legal History

Juneteenth: A New Federal Holiday with a Complex Legal History 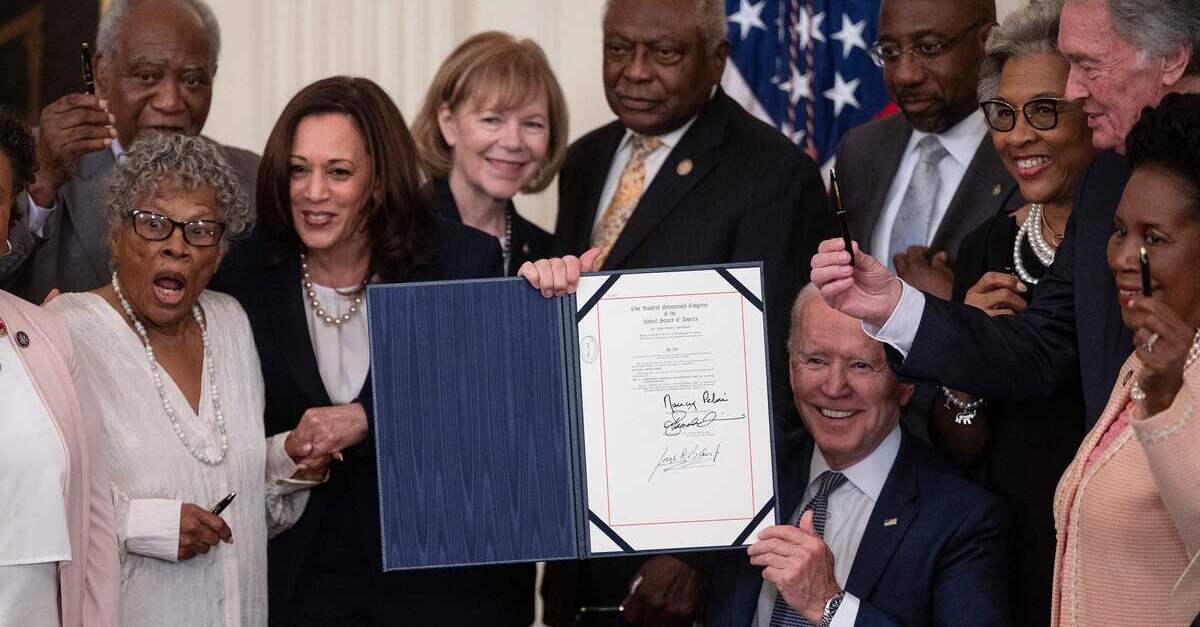 U.S. Vice President Kamala Harris and Opal Lee, the activist known as the grandmother of Juneteenth, watch as President Joe Biden holds the signed Juneteenth National Independence Day Act, in the East Room of the White House, June 17, 2021, in Washington.

After years of piecemeal celebrations across the United States, Juneteenth has finally ascended the ranks of an official national holiday. The Senate unanimously passed the Juneteenth National Independence Day Act on June 15, 2021. Over the nay votes of 14 Republicans, the Act passed the House of Representatives the next day to establish June 19 as a federal holiday. President Joe Biden signed the bill into law Thursday, making Juneteenth the first new federal holiday since Martin Luther King, Jr. Day was designated in 1983.

The text of the law is brief; it simply say declares Juneteenth a legal public holiday without comment. The holiday aims to commemorate the start of freedom for formerly enslaved Black Americans. As one of the law’s co-sponsors, Representative Sheila Jackson Lee (D-Texas) put it, “Juneteenth is as significant to African Americans as July 4 is to all Americans.”

Though the holiday does offer homage to a profoundly joyful day in American history, it serves simultaneously as an important reminder of the slow pace of justice for Black Americans. June 19 is the anniversary of our country being very, very late to follow through on its own promise — a habit that has been repeated all too often.

Unlike the story fed to many of us in school, thousands of slaves did not instantaneously break free from bondage at the moment the Emancipation Proclamation was handed down. Rather, it took a full two and a half years before the system of legal slavery was actually dismantled (and that, of course, does not account for the years during and after Reconstruction when de facto slavery still existed in the South under different legal monikers).

President Abraham Lincoln issued the Emancipation Proclamation on January 1, 1863. Here’s what it said:

That on the first day of January, in the year of our Lord one thousand eight hundred and sixty-three, all persons held as slaves within any State or designated part of a State, the people whereof shall then be in rebellion against the United States, shall be then, thenceforward, and forever free; and the Executive Government of the United States, including the military and naval authority thereof, will recognize and maintain the freedom of such persons, and will do no act or acts to repress such persons, or any of them, in any efforts they may make for their actual freedom.

At the time, Texas, having recently joined the Union in 1846 (based on a 1845 decision to do so), was truly a Lone Star state. Because the U.S. government lacked meaningful power over many Texan territories, slavery continued there, unfettered by Lincoln’s words. Many slaveowners considered Texas a safe haven for their practices, and some even traveled to the state for the sole purpose of continuing slave ownership.

On June 19, 1865, two months after Lincoln’s assassination, Major General Gordon Granger arrived in Galveston to announce the end of both the Civil War and slavery. (Lee surrendered to Grant on April 9; Lincoln was shot April 15.) Granger’s presence, along with federal troops, was what was required — long after Lincoln’s executive order — to actually end human bondage.

Granger’s announcement in Texas, while certainly welcome by those who abhorred slavery, contained no dramatic language of freedom and equality. Rather, it was largely a warning to the newly freed people, which mandated a list of rules to clarify what was expected of them:

The people of Texas are informed that, in accordance with a proclamation from the Executive of the United States, all slaves are free. This involves an absolute equality of personal rights and rights of property, between former masters and slaves and the connection heretofore existing between them, becomes that between employer and hired labor. The Freedmen are advised to remain at their present homes and work for wages. They are informed that they will not be allowed to collect at military posts; and they will not be supported in idleness either there or elsewhere.

No persons formerly slaves will be permitted to travel on the public thoroughfares without passes or permits from their employers. … They will not be subsisted in idleness, or in any way except as employees of the Government, or in cases of extreme destitution or sickness. … Idleness is sure to be productive of vice. … No person, white or black … able to labor, will be subsisted by the Government in idleness, and thus hang as a dead weight upon those who are disposed to bear their full share of the public burdens.

The Thirteenth Amendment, which abolished slavery under the United States Constitution, was not ratified until  December 1865. It was nearly a century after that when the Supreme Court of the United States ruled against school segregation in Brown v. Board of Education. Much like the first Juneteenth, Brown‘s 1954 mandate still took several years, another SCOTUS decision, and federal troops to actually make school desegregation happen.

Just as the concept of freedom itself for Black Americans, the history of the Juneteenth holiday is similarly patchwork. Texas was the first state to celebrate the holiday, and it began doing so during Reconstruction with community events and festivals. In 1979, freshman Texas state representative Al Edwards proposed a bill to make Juneteenth an official state holiday; it passed, and Juneteenth was officially recognized as a holiday on January 1, 1980 (despite former President Donald Trump‘s declaration that “nobody had heard of it” until he “made Juneteenth very famous” by scheduling a campaign event in Tulsa on that date).

Over the next four decades, the rest of the states slowly followed. North and South Dakota were the final two hold-outs. South Dakota Gov. Kristi Noem announced Juneteenth would be a state holiday on Friday, June 18, 2021.

South Dakota, however, ironically the home of Mount Rushmore, has still refused to follow suit. Although a bill was introduced on the matter, it failed to make it out of committee.  South Dakota State Senator Reynold Nesiba (D), who sponsored the bill, commented, “I find it somewhat ironic.”

Fourteen Congressional Republicans also opposed making Juneteenth a federal holiday. They were Mo Brooks and Mike Rogers of Alabama, Andy Biggs and Paul Gosar of Arizona, Andrew Clyde of Georgia, Scott DesJarlais of Georgia, Ronny Jackson and Chip Roy of Texas, Doug LaMalfa and Tom McClintock of California, Thomas Massie of Kentucky, Ralph Norman of South Carolina, Tom Tiffany of Wisconsin, and Matt Rosendale of Montana. The New York Times reported varied reasoning for these Congressmen’s votes against Juneteenth, ranging from combatting alleged attempts by Democrats to “balkanize our country and fuel separatism” to simply objecting to the title of the act itself.

Still, there has been overwhelming public support for the recognition of Juneteenth as a federal holiday. Festivals are planned across the country, and events such as public readings of the Emancipation Proclamation are scheduled.

While the internet has not yet settled on one official salutation for Juneteenth, the holiday promises to be an important reminder as well as a joyful celebration for generations to come.

Wishing you all a very jubilant and liberating Juneteenth!#JuneteenthFederalHoliday https://t.co/SfWtKut7Zl

Happy #Juneteenth weekend. On Memorial Day, there is a national moment of silence in remembrance. Taking a moment of silence on Friday is one way to respectfully observe Juneteenth before the celebration. Mixture Somber (slavery) Jubilant (freedom) https://t.co/ENNzxm3ihx