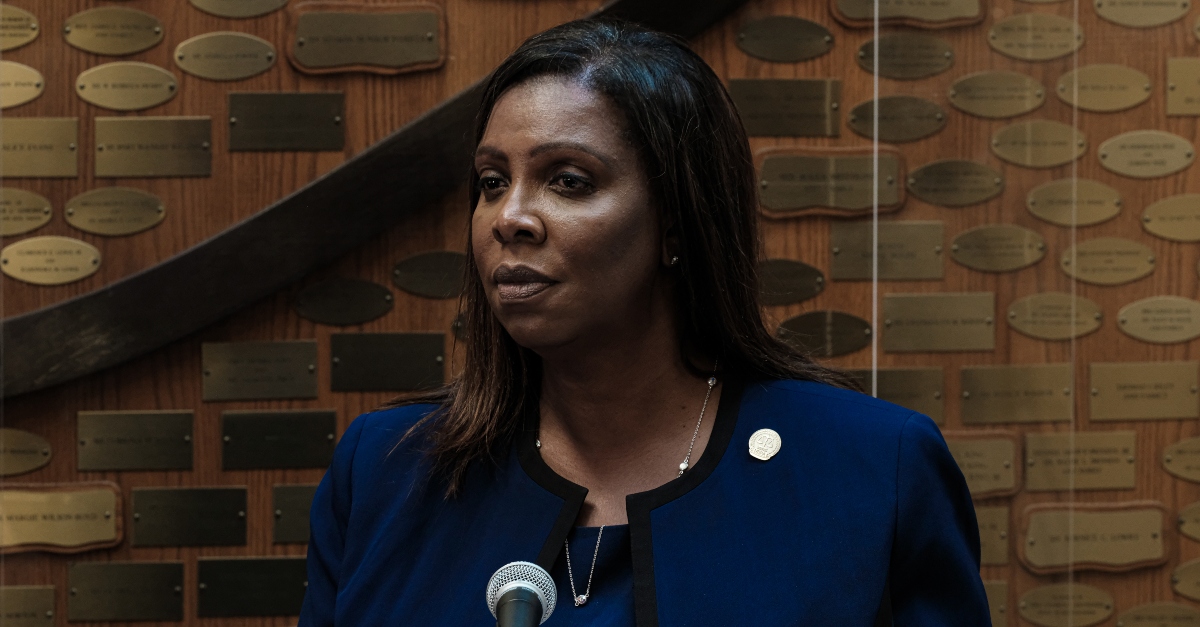 On the year former President Trump’s Federal Communications Commission voted to repeal net neutrality, the regulator was inundated with more than 22 million comments. Nearly 18 million of them were fake, and some 40 percent of those came from an influence campaign linked to the broadband industry, New York Attorney General Letitia James found in a 39-page report released on Thursday.

Some 8.5 million of the fake comments used the names and personal information of real people without their knowledge or consent, she added.

Net neutrality refers to the principle that broadband providers should treat all content equally, without blocking, slowing down, or charging to boost certain content. Advocates fiercely opposed its repeal, and the attorney general said that the broadband industry secretly funded a campaign that contributed to its demise. Three of the companies described as the “lead generators” of those campaigns—Fluent, Inc., Opt Intelligence, Inc., and React2Media, Inc.—have entered into settlements with the attorney general’s office.

“The settlements require the companies to pay $3.7 million, $550,000, and $150,000 respectively, for their misconduct,” the report states. “The settlements also impose comprehensive reforms for any future campaigns to protect consumers and prevent fraudulent comments.”

That Astroturf campaign, as the report refers to it, was in turn funded with $4.2 million from Broadband for America, an industry-funded non-profit made up of senior executives from the broadband companies and trade groups, according to the attorney general.

“The broadband group believed this support — in conjunction with press outreach, social media campaigns, and coordinated filings from the broadband industry and free-market economists — would ‘give [FCC Chairman Ajit] Pai volume and intellectual cover’ for repeal,” the attorney general’s report finds, referring to the industry-friendly leader of the commission during Trump’s tenure. “Indeed, one broadband industry executive — himself a former chairman of the FCC — advised members of BFA’s executive committee, in an email, that ‘we want to make sure Pai can get those comments in so he can talk about the large number of comments supporting his position.'”

“As a result, the OAG has not found that these parties violated New York law,” the report states. “However, the conduct of these broadband companies and their lobbying firm raises serious concerns.” 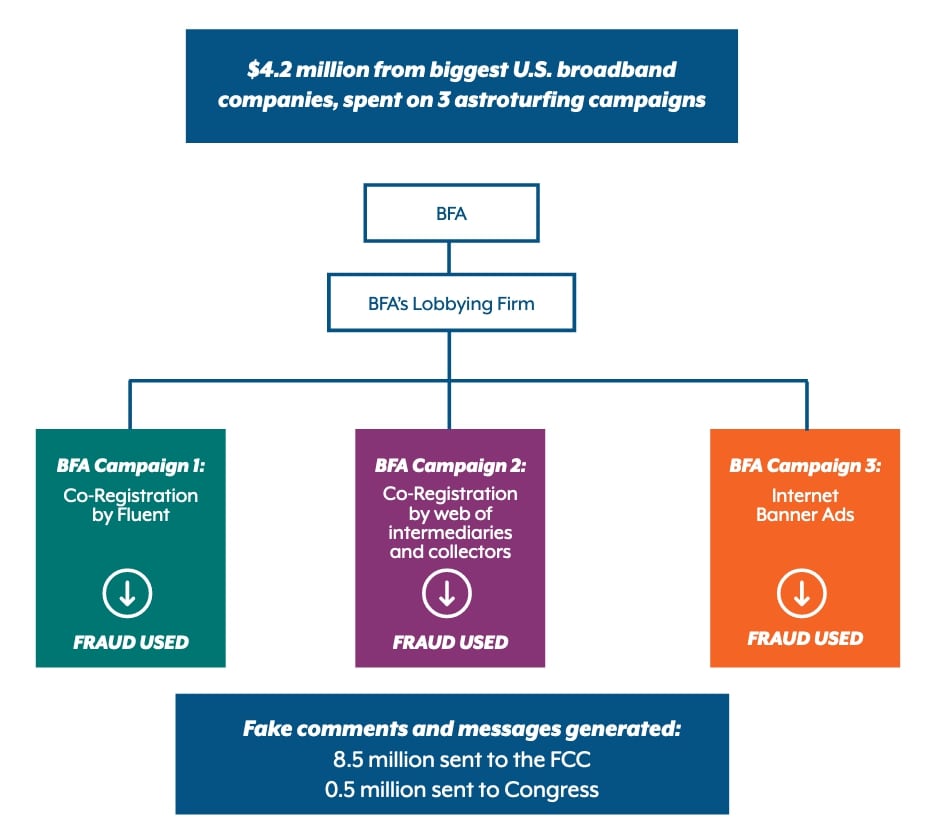 The attorney general’s report includes this chart, which abbreviates the non-profit group Broadband for America as “BFA.”

Broadband for America’s president did not immediately respond to Law&Crime’s request for comment.

Titling her report “How U.S. Companies & Partisans Hack Democracy to Undermine Your Voice,” James characterized the announcement as a salvo in the fight against “fraud” and “impersonation.”

“Americans voices are being drowned out by masses of fake comments and messages being submitted to the government to sway decision-making,” James wrote in a statement. “Instead of actually looking for real responses from the American people, marketing companies are luring vulnerable individuals to their websites with freebies, co-opting their identities, and fabricating responses that giant corporations are then using to influence the polices and laws that govern our lives. But, today, we are taking action to root out this fraud and the impersonation that has been corrupting the process for far too long.”

Her office’s investigation determined that nearly 80 percent of the phony comments linked to the broadband industry derived from a practice known as co-registration, in which consumers are offered rewards for their personal information.

“Marketing offers varied widely, and included everything from discounted children’s movies to free trials of male enhancement products,” the report states, embedding screenshots of representative promotions. “The broadband industry created solicitations to run alongside these marketing offers, asking consumers to join the campaign opposing net neutrality,” the report continues. “Responses would be collected and used to generate comments. The remainder of the comments — roughly 20% — were to be generated using online ads placed on websites across the internet.

James added that net neutrality is not the only issue that has been hacked by inauthentic commenters.

“From net neutrality rules to laws affecting criminal justice reform, health care, and more, these fake comments have simply been generated to influence too many government policies, which is why we are cracking down on this illegal and deceptive behavior,” James said in her statement.

The attorney general found that the three firms that entered into the settlements were involved in more than 100 other advocacy campaigns.

“The firms played the same role in those campaigns: to obtain individuals’ consent to submit comments, letters, and petitions to the government,” the report states. “Through this work, the firms helped generate more than 1 million comments for rulemaking proceedings run by the Environmental Protection Agency, the Bureau of Ocean Energy Management, and the FCC, and more than 3.5 million digital signatures for letters and petitions to federal and state legislators and government officials.”

As outlined in the report, one of the fake comments was submitted in the name of Nassau County, New York resident Kenneth Langsam, who had died seven years before he supposedly “urge[d]” the FCC to drop net neutrality. James says that his story is not unique, and she anonymously quotes other New Yorkers she says were victimized by comments unwittingly submitted in their name.

“I find it extremely sick and disrespectful to be using my deceased dad to try to make an unpopular decision look the opposite,” one is quoted as saying.

“This is terrifying,” another told the attorney general’s office. “Who knows what else has been said falsely under my name?”

James released her report on the day the House Committee on Energy and Commerce convened a hearing “Broadband Equity: Addressing Disparities in Access and Affordability.”

Read the attorney general’s report below: