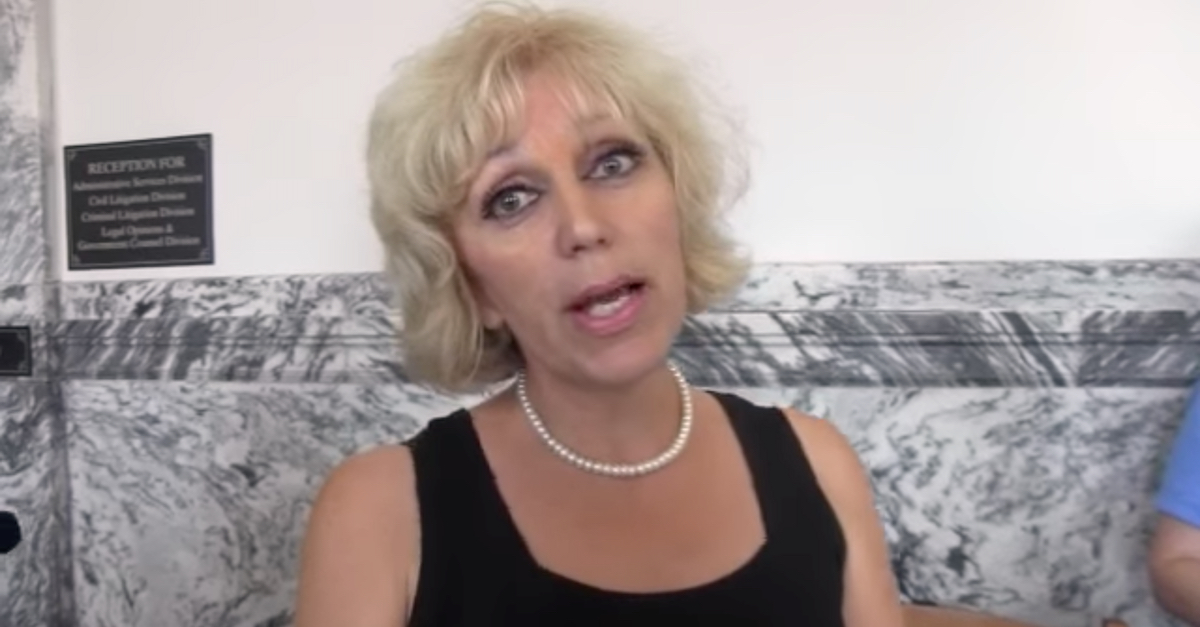 Orly Taitz, the conspiracy theorist, dentist, and attorney who in bygone days hotly litigated the question of whether Barack Obama was born in the United States, on Thursday filed court papers in an attempt to shut down the U.S. Senate’s upcoming impeachment trial of former President Donald Trump.

The outcome of the upcoming impeachment trial appears to be tipping in Trump’s favor because most Senate Republicans agree with Taitz and some others who believe it is unconstitutional to try a president who has since left office.  (There are others who see the constitutional matter differently.) While the Senate seems poised to actually try Trump and to acquit, Taitz prefers to dispense with the formal trial altogether. She’s asking a federal judge to unilaterally stall the Senate by issuing a preliminary injunction and a stay against the upper chamber’s proceeding to determine Trump’s fate.

“[A] senate trial for removal from office of Donald Trump after he already left office, is moot, unconstitutional and utterly void of any legal basis,” Taitz wrote in a motion filed in the Central District of California, Santa Anna Division.  She says that the trial is a thinly veiled move “aimed at depriving [Trump] voters . . . of their [F]irst [A]mendment right to vote for him and have him elected in 2024 or at any other time.”

Her argument, at its core, is that Trump followers have a “right” to vote for Trump if he runs for office again. Under her logic, which ignores the U.S. Constitution, Trump’s followers cannot be deprived of that purported “right” by a post-term Trump impeachment trial.

Taitz accused Harris and Schumer of conduct which is “bordering on criminal.” To wit:

Furthermore, actions of the defendants are bordering on criminal under Title 18, Section 242 of the US Constitution, Deprivation of Rights under the Color of Authority. By exceeding their constitutional authority and trying a private individual Donald Trump, they are seeking to deprive him of his constitutional right to run for office in the future and they are seeking to deprive 75 million of his voters of their right to vote for him in the future. A monetary legal remedy would be inadequate in this case, as 75 million Americans would be deprived of their first amendment right to political free speech, their right to vote for the candidate of their choice. As such an injunctive equitable relief is needed.

Elsewhere, Taitz suggests that the entire second impeachment trial has little to do with Trump’s conduct but rather was launched with the “ulterior motive of depriving” the ex-president of the “right” to run for office again.

Taitz argues further that Trump would be able to run for office again even if he is impeached. “Article 2, Section 1, Clause V, only requires that a President meet just 3 qualifications,” she writes. Those qualifications are that the candidate “[b]e 35 years of age or older, 14 years a resident of the United States, and be a NATURAL born citizen.  There is no exception/caveat that the President must NOT have been impeached by the U.S. Senate.”

That view does not jive with the language of the Constitution itself, which reads (Article I, Section 3) (emphasis ours):

The Senate shall have the sole Power to try all Impeachments. When sitting for that Purpose, they shall be on Oath or Affirmation. When the President of the United States is tried, the Chief Justice shall preside: And no Person shall be convicted without the Concurrence of two thirds of the Members present.

Judgment in Cases of Impeachment shall not extend further than to removal from Office, and disqualification to hold and enjoy any Office of honor, Trust or Profit under the United States: but the Party convicted shall nevertheless be liable and subject to Indictment, Trial, Judgment and Punishment, according to Law.

Still, Taitz believes she’s entitled to her requested relief because she thinks she’ll succeed on the merits:

Plaintiffs’ motion for a preliminary injunction should be granted. The court should STAY the senate trial of a private citizen Donald Trump until the matter is fully heard on the merits and the trial is vacated.

Taitz launched the litigation on behalf of the Defend Our Freedoms Foundation.