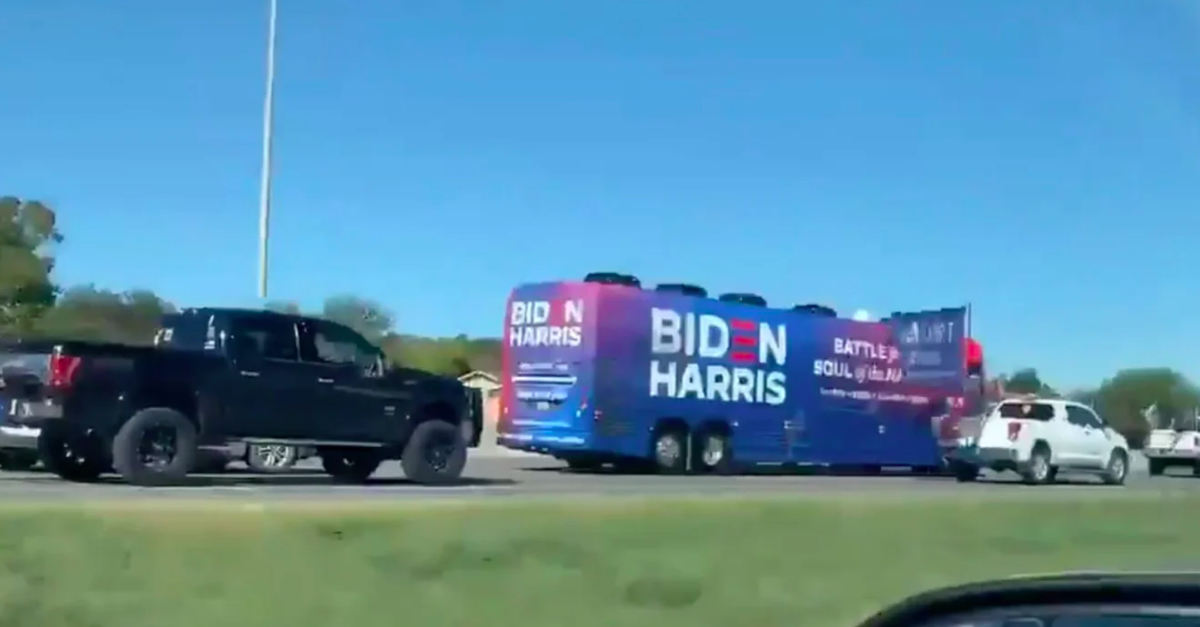 A so-called “Trump Train” was caught on camera on Oct. 30 surrounding the Biden/Harris campaign bus on Interstate 35 near San Marcos, Texas. Contemporary reports indicated that the FBI was looking into what occurred. Video showed at least two cars striking one another on the highway; at least one of the cars was damaged.

State Sen. Wendy Davis (D), who was on the bus, said shortly after the Jan. 6th events in Washington, D.C., that law enforcement did not take the Texas event seriously enough, KMBT-TV reported.

On October 30, when a caravan of his supporters in Texas attacked a bus full of Biden campaign workers, nearly running it off the road, President Trump tweeted a stylized video of the caravan and captioned it, “I LOVE TEXAS!”  Days later, he declared that “these patriots”—who could easily have killed a busload of innocent campaign staff—“did nothing wrong.”

Had forgotten about this: Trump responded to reports the FBI was investigating the bus incident by declaring “these patriots did nothing wrong.” pic.twitter.com/k3Hp0f2CyB

The link was not merely a sequential series of events on a timeline, Del. Plaskett (D-Virgin Islands) noted. Keith Lee, she said, was a Trump supporter who organized the “Trump Train” in Texas. He was also at the Capitol on Jan. 6th.

Plaskett notes that one of the Trump supporters responsible for that was at the Capitol on 1/6. pic.twitter.com/HSOM5WJeLL

Lee is not among those currently charged with a crime in connection to the Capitol siege.

The New York Times, in its own report and one republished by other newspapers, linked Lee to the Trump Train in Texas back in October and to the U.S. Capitol on Jan. 6. It describes Lee as “an Air Force veteran and former police detective” who “spent the morning of Jan. 6 casing the entrances to the Capitol.”

In online videos, the 41-year-old Texan pointed out the flimsiness of the fencing. He cheered the arrival, long before President Trump’s rally at the other end of the mall, of far-right militiamen encircling the building. Then, armed with a bullhorn, Mr. Lee called out for the mob to rush in, until his voice echoed from the dome of the Rotunda.

In the months leading up to the riot, Mr. Lee had helped organize a series of pro-Trump car caravans around the country, including one that temporarily blockaded a Biden campaign bus in Texas and another that briefly shut down a Hudson River bridge in the New York City suburbs.

The reports detail Lee’s involvement with raising money to get people to participate in the blockade, the “Trump Train,” and the events at the Capitol.

Plaskett relayed the links to those senators who would listen.

Video of the incident rolled on Senate monitors.

“According to witnesses, this caravan repeatedly tried to force the bus you saw — and you see in that video — to slow down in the middle of the highway and then to run it off of the road,” Plaskett said. “What that video you just saw does not show is that the bus they tried to run off of the road was filled with young campaign staff, volunteers, supporters, surrogates, people.  As the Trump supporters closed in on the bus, a large black pickup truck adorned with Trump flags suddenly and intentionally swerved and crashed into a car driven by a Biden/Harris volunteer.  News of the event went viral on social media.  The President of the United States in a campaign saw his own supporters trying to run a bus carrying his opponent’s campaign workers off the highway.  To physically intimidate people in this country campaigning — here was his response the next day.”

Plaskett then showed Trump’s tweets in support of the “Trump Train.”

“The President of the United States tweeted a video of his supporters trying to drive a bus off of the road,” Plaskett continued.  She noted that Trump’s tweet had a “fight theme” song placed over the otherwise silent video when he tweeted it.

“By the next evening, that tweet that he did had been viewed 12.6 million times,” Plaskett said. “And it wasn’t just a tweet. On November 1st, at a Michigan rally with a sea of supporters, the president talked about that incident again.”

“The president made a public joke of violence against campaigners in an American election,” Plaskett continued. “He made light of it. This is not a joke. In fact, it was so violent — it put so many people in harm’s way, that the FBI investigated the incident and the criminal responsibility of those who attacked these campaign workers.”

Plaskett then showed Trump’s tweets which mocked the FBI’s interest in the case.

“In my opinion, these patriots did nothing wrong,” Trump said on his since-banned Twitter account (Twitter justified the move by saying Trump glorified and encouraged potential violence in the aftermath of Jan. 6).

“Donald Trump’s praise worked to incite them [his supporters] further,” Plaskett went on to allege. ‘They remained ready to fight; ready to ‘stand back and stand by.'”

The latter was a reference to Trump’s statement to the Proud Boys which occurred at a presidential date in late Sept. 2020.

Some observers, including Yale professor and CNN analyst Asha Rangappa, noted that some who supported the “Trump Train” are now sitting seats of judgment.

DO NOT FORGET that @marcorubio endorsed the Texas caravan that ran the bus off the road as well, saying “We love what they did.” He’s now one of the jurors adjudicating Trump’s guilt. https://t.co/ByH3lanMBk

“I saw yesterday a video of these people in Texas,” Rubio said at a rally, according to Newsweek. “Did you see it? All the cars on the road, we love what they did.”

“We do that in Florida every day,” Rubio continued. “I love seeing the boat parades. We thank all the great patriots.”

Rubio also is among those who believe it’s time to move on and forget the Trump era and focus on other things, like vaccines, jobs, and China, which he deems to be more important.