Trump Pushed Rally Organizers to Override Prohibitions Against Marching from Ellipse to the Capitol: Impeachment Manager 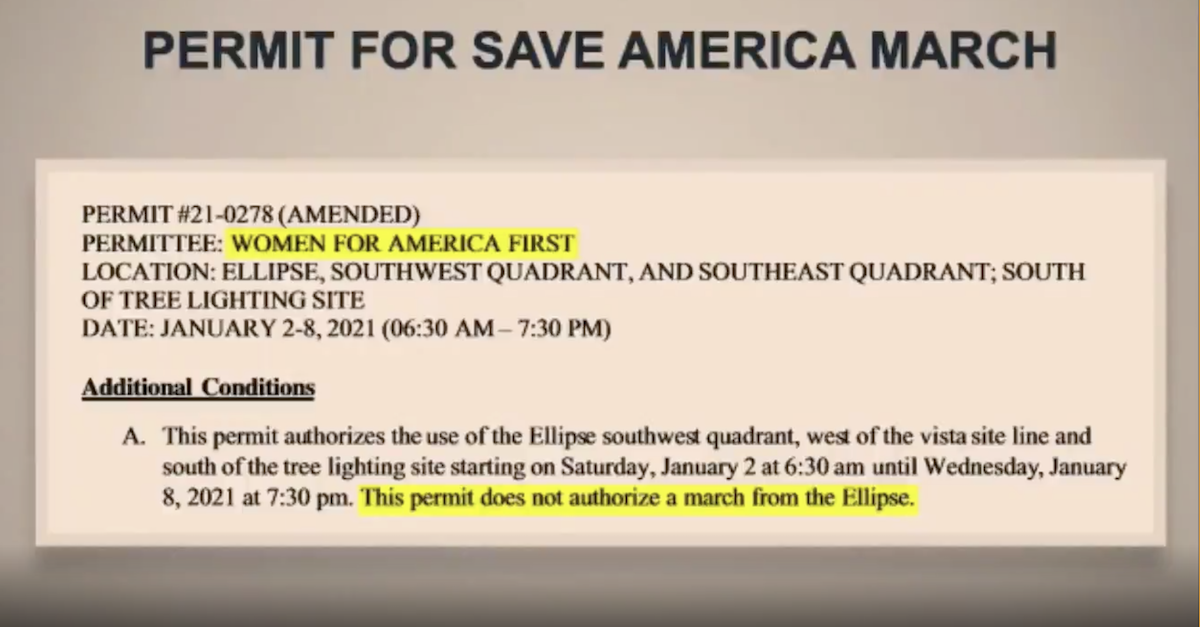 Disclosed during opening statements of Trump’s second impeachment trial, this permit for the ‘Save America’ rally prohibited a march from the Ellipse to the Capitol—until the 45th president got involved, an impeachment manager said.

Dramatic opening arguments for former President Donald Trump’s second impeachment trial kicked off with never-before-seen footage of law enforcement in hand-to-hand combat with the mob, Officer Eugene Goodman provoking rioters to chase him to protect Congress members, and now-Senate Majority Leader Chuck Schumer’s “near miss” with insurrectionists who viewed him as a target.

A few hours before that footage started to unspool, a Virgin Islands delegate serving as the first impeachment manager from a U.S. territory quietly revealed a perhaps more explosive revelation.

“President Trump became directly involved with the planning of the event, including the speaking lineup and even the music to be played, ” Del. Stacey Plaskett said, in the beginning of a remarkable dive into the logistics and planning of the Capitol siege.

At the center of Plaskett’s speech in this passage was Women for America First, an Alexandria, Va.-based dark money group whose executive director is Kylie Jane Kremer.

Earlier on Wednesday, fellow impeachment manager Rep. Eric Swalwell called attention to Kremer’s currently pinned tweet: a message “The calvary [sic] is coming, Mr. President!” with an advertisement of the day of the siege with the website TrumpMarch dot com. Trump quoted her tweet with the message: “A great honor!”

Kremer’s group had obtained a permit that expressly prohibited the defining event that preceded the riot: “This permit does not authorize a march from the Ellipse.”

Del. Plaskett noted that Trump “seemed to have other plans for what was going to happen at the rally.”

“Women for America First had initially planned the rally-goers to remain in the Ellipse until the counting of the state electoral votes was completed, just like they had remained at Freedom Plaza after the second Million MAGA March,” Plaskett said, referring to the Nov. 14th demonstrations that brought thousands to Washington. “The permit stated in no uncertain terms that the march was not permitted. It was not until after President Trump and his team became involved in the planning that the march from the Ellipse to the Capitol came about—in direct contravention of the original permit.”

“This is not a coincidence,” she continued.

The role of dark money groups in facilitating the events at the U.S. Capitol had been a matter of intense scrutiny long before the impeachment trial.

Senator Ron Wyden (D-Ore.) urged the Internal Revenue Service to investigate whether non-profit organizations abused the U.S. tax code to solicit charitable contributions to attempt to overthrow the government the agency served. The Oregon Democrat had been reacting in part to the reporting from the Washington Post that an arm of the Republican Attorneys General Association (RAGA) sent out robocalls urging supporters to go to the Capitol and “fight” Congress over Trump’s election-fraud conspiracy theories.

That non-profit group had not been mentioned by the impeachment managers by press time.

Women for America First did not immediately respond to an email requesting comment.