It wasn’t so long ago that the Center for Public Integrity obtained government documents showing that the White House moved to hold up military aid to Ukraine less than two hours after President Donald Trump asked Volodymyr Zelensky on July 25 to investigate the Bidens and the debunked CrowdStrike conspiracy theory that Ukraine, not Russia, interfered in the 2016 election. Although the document dump was a break-through, many were frustrated by the Department of Justice’s redactions.

Legal blog Just Security on Thursday filled in some of those gaps, revealing that the DOJ repeatedly redacted emails expressing concern that the Trump-ordered hold on the congressionally appropriated military aid to Ukraine violated the Impoundment Control Act of 1974 [emphasis ours]:

The documents reveal growing concern from Pentagon officials that the hold would violate the Impoundment Control Act, which requires the executive branch to spend money as appropriated by Congress, and that the necessary steps to avoid this result weren’t being taken. Those steps would include notifying Congress that the funding was being held or shifted elsewhere, a step that was never taken. The emails also show that no rationale was ever given for why the hold was put in place or why it was eventually lifted.

Just Security viewed unredacted versions of email correspondence between acting Pentagon comptroller Elaine McCusker and Office of Management and Budget (OMB) officials, then explained what the DOJ blacked-out (i.e., what it hid from the public when releasing documents to the Center for Public Integrity).

Less than two hours after the Trump-Zelensky call on July 25— which ended at 9:33 a.m. according to the call memo released by the White House — Trump’s hand-picked OMB Associate Director for National Security Programs Michael Duffey emailed the deputy secretary of defense David Norquist, the Acting Secretary of Defense’s Chief of Staff Eric Chewning, and McCusker, informing them not to release the aid to Ukraine.

“Based on guidance I have received and in light of the Administration’s plan to review assistance to Ukraine, including the Ukraine Security Assistance Initiative, please hold off on any additional DoD obligations of these funds, pending direction from that process,” Duffey wrote at 11:04 a.m. Duffey appeared to acknowledge that his request could raise eyebrows, concluding his email by noting the “sensitive nature” of his request and asking the officials to keep it quiet.

“Given the sensitive nature of the request, I appreciate your keeping that information closely held to those who need to know to execute direction,” he wrote.

Redacted documents show that McCusker followed up with OMB at 3:05 p.m on the same day.

According to Just Security, that black bar is McCusker asking OMB if the hold went through the Defense of Department’s (DoD) general counsel. Included on that email was career OMB official Mark Sandy, who we know initially signed off on the hold of the aid in the beginning of July. On July 26, a DoD readout said that OMB told them President Trump directed the hold on the military aid through Mick Mulvaney in early July.

“As we discussed, as of 12 AUG I don’t think we can agree that the pause ‘will not preclude timely execution.’ We hope it won’t and will do all we can to execute once the policy decision is made, but can no longer make that declarative statement,” McCusker wrote.

Here’s what the DOJ did to McCusker’s email:

On Aug. 26, two days before the hold on the aid was reported publicly for the first time in Politico, McCusker again emailed Duffey, concerned about non-compliance with the “impoundment” law’s requirements. 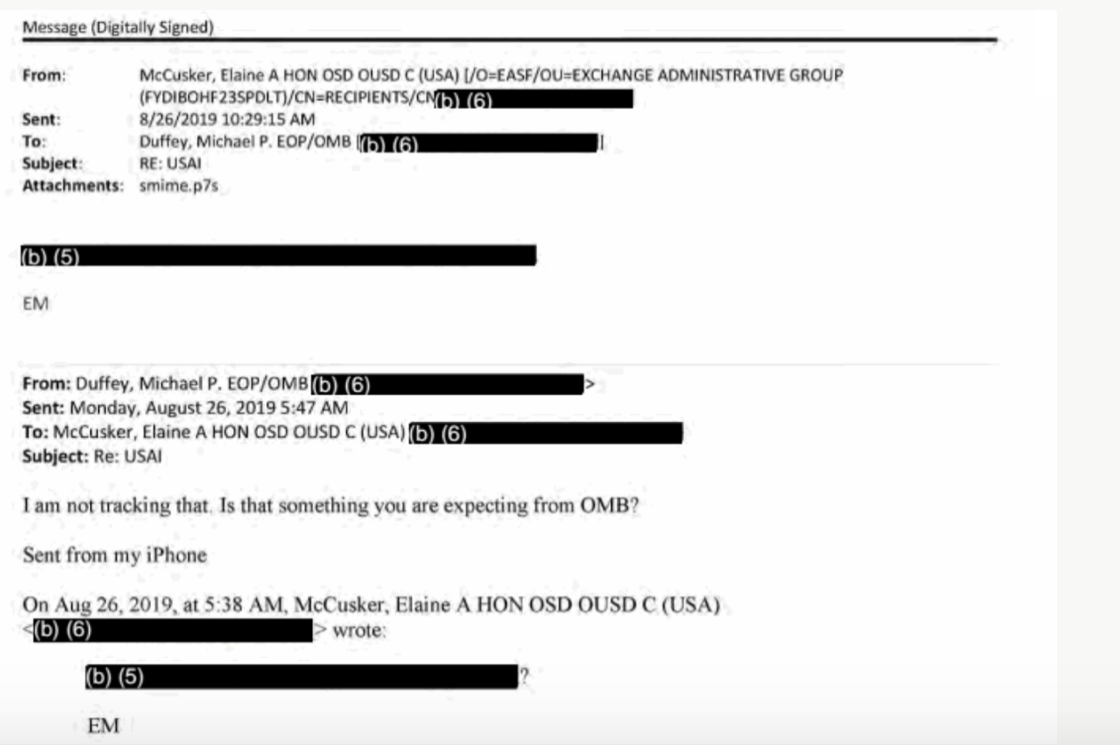 “What is the status of the impoundment paperwork?” McCusker asked at 5:38 a.m., per Just Security.

“I am not tracking that. Is that something you are expecting from OMB?” he asked.

Notice that McCusker’s legal concerns were both blacked out. Only Duffey’s email, which revealed nothing about the substance of the exchange, was released.

The next day, Aug. 27, McCusker responds to Defense Secretary Mark Esper’s chief of staff Eric Chewning. Chewning said that defense contractors were starting to wonder what was going on with the withheld funds.

Recognizing the importance of decision space, but this situation is really unworkable made particularly difficult because OMB lawyers continue to consistently mischaracterize the process — and the information we have provided. They keep repeating that this pause will not impact DOD’s ability to execute on time. 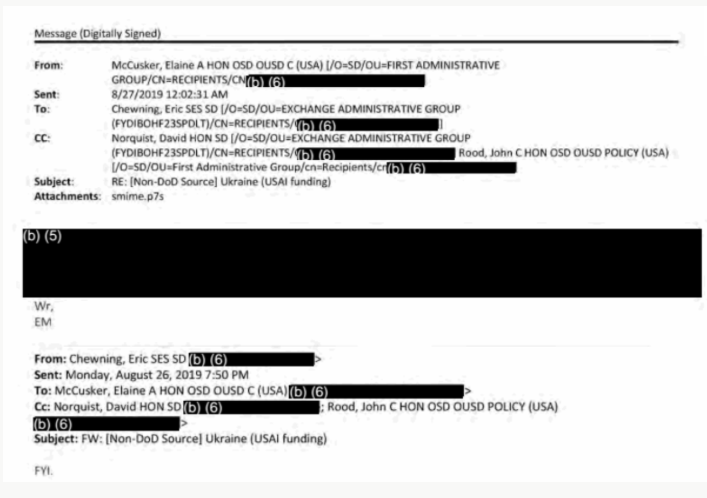 On the same day, McCusker shared with Duffey a draft of a letter that was going to be sent to acting Director of OMB Russell Vought.

Per Just Security, this letter said, in part [emphasis added]:

As you know, in a series of footnotes to its apportionment documents, the Office of Management and Budget has directed the Department to pause its obligation of USAI funding temporarily, pending completion of an ‘interagency process to determine the best use of such funds.’ These footnotes make the affected funding legally unavailable for obligation during the period of the directed pause. As a result, we have repeatedly advised OMB officials that pauses beyond Aug. 19, 2019 jeopardize the Department’s ability to obligate USAI funding prudently and fully, consistent with the Impoundment Control Act.

The latest OMB-directed pause ended on August 26, 2019, and has not been extended. Accordingly, the Department is resuming its obligation of USAI funding. We believe that OMB’s imposition of any further delays in obligating USAI funding will trigger the ICA’s requirement to transmit to Congress a special message proposing rescission or deferral of funding for the USAI.

This Aug. 27 transmission of a draft letter showed: the Pentagon told OMB that a hold on the aid past Aug. 19 would “jeopardize the Department [of Defense’s] ability” to comply with the law. This was completely redacted by the DOJ, and the hold on the aid was extended later on in the day by Duffey.

After the hold on the aid went public in Politico on Aug. 28, OMB general counsel Mark Paoletta reportedly forwarded talking points that included the line, “No action has been taken by OMB that would preclude the obligation of these funds before the end of the fiscal year.”

McCusker told Duffey in response, “I don’t agree to the revised [talking points] — the last one is just not accurate from a financial execution standpoint, something we have been consistently conveying for weeks.”

The DOJ redacted this response.

The reporting reinforces a number of key points and highlights just how deep the DOJ is in all of this. As Law&Crime noted just days ago, attorneys for the White House and the DOJ in the late summer scrambled to piece together a legal justification for holding up the aid and for hiding the hold from Congress.

The New York Times reported that those efforts were focused on sidestepping the Impoundment Control Act–a law which requires the executive branch to notify Congress if and when already-appropriated funds are being withheld. The theory these lawyers came up with? Trump is the president:

By late summer, top lawyers at the Office of Management and Budget [(OMB)] who had spoken to lawyers at the White House and the Justice Department in the weeks beforehand, were developing an argument — not previously divulged publicly — that Mr. Trump’s role as commander in chief would simply allow him to override Congress on the issue.

The argument reportedly played out something like this: the president needed to maintain his “negotiating position” in order to aid “his efforts to fight corruption” in Ukraine. In order to keep that strong hand, the lawyers reasoned after the fact, Congress just could not know about the so-called “brief pause” in funds earmarked for the Ukrainian armed forces to obtain materiel.

On Aug. 29, Defense Secretary Esper’s chief of staff told McCusker that Esper and Secretary of State Mike Pompeo were going to discuss the hold of the aid with President Trump on Aug. 30.

According to Just Security, Duffey told McCusker after that meeting occurred, “Clear direction from POTUS to hold.”

In summary, it is clear: 1) who demanded the hold on Ukraine aid through whom, and when key players acted. Trump directed Mick Mulvaney to make the hold happen in early July, Mark Sandy signed off, then OMB officially acted again to put the hold in place shortly after the Trump-Zelensky call occurred. That call, in which Trump asked Ukraine to investigate the Bidens, was the subject of the whistleblower complaint that led to impeachment; 2) concerns were repeatedly raised at DoD that the hold Congress didn’t know about violated the Impoundment Control Act of 1974, but OMB and the White House acted as if there was no such concern; 3) Pentagon officials were concerned that the congressionally appropriated funds wouldn’t be spent, as required legally, by the end of the fiscal year; 4) the aid was released only after the hold was reported publicly in Politico for the first time; 5) the aid was released after the whistleblower complaint was received but before the complaint went public; 6) the White House has blocked witnesses with firsthand knowledge of decision-making from testifying in the impeachment inquiry; 7) even when documents about the decision-making process did go public, the DOJ hid internal concerns about illegality from the public.