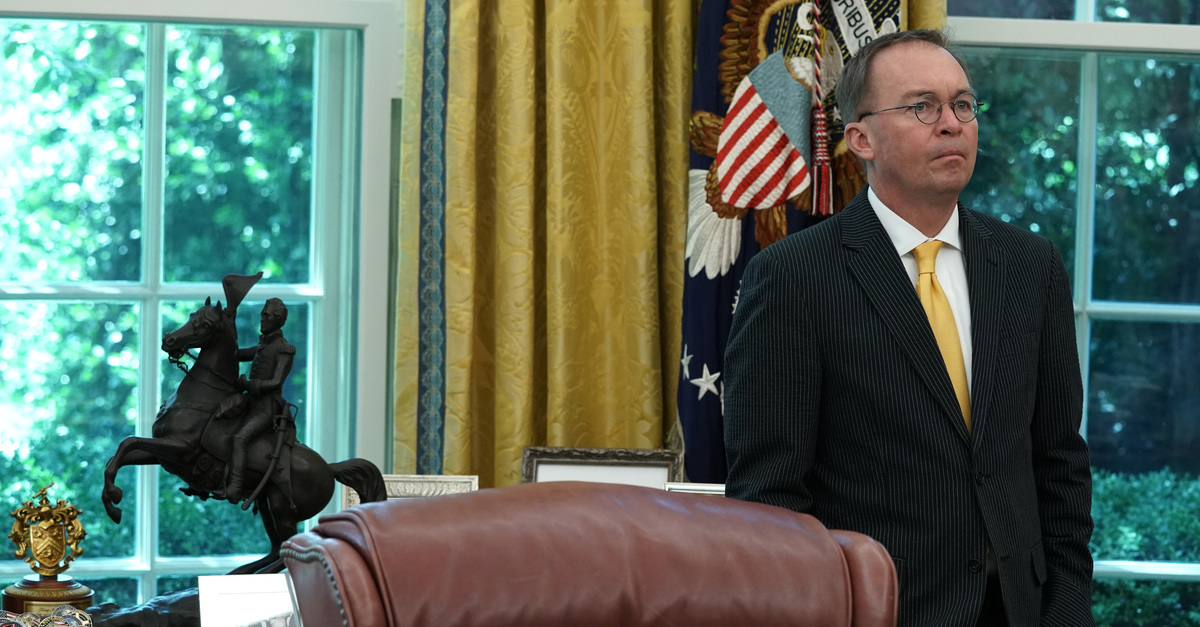 And another excuse comes tumbling down.

On Tuesday afternoon, documents were released which revealed the White House first took action to withhold $250 million in military aid to the Ukraine on July 25–the same day of President Donald Trump‘s fateful phone call with Ukrainian President Volodymyr Zelensky.

“It’s also an impermissible use of our foreign and military policy to support [Trump’s] political campaign,” Painter added, in a message to Law&Crime.

According to a summary of White House Office of Management and Budget (OMB) documents released by the House Budget Committee and obtained by CNN, the hold on aid for the Ukraine was initially signed by career OMB official Mark Sandy at the beginning of July.

Sandy was recently deposed by the House Intelligence Committee as part of the ongoing impeachment inquiry and said that on July 18, after returning from leave, Duffey informed him “of the President’s direction to hold military support funding for Ukraine.”

And, according to Sandy’s testimony–a redacted version of which was released late Tuesday–at least one OMB attorney tendered his resignation due, in part, to the hold placed on Ukrainian military aid.

“Did this person at OMB Legal tell you that they were leaving on resigning from OMB at least in part because of their concerns or frustrations about the hold on Ukraine security assistance?” asked Investigation Counsel Nicolas Mitchell.

“Yes,” Sandy replied, “In terms of that process, in part.”

Reaction to Sandy’s disclosures and the House Budget Committee’s summary were categorically negative for the White House.

“Simple – it’s not a coincidence,” former federal prosecutor, Pace Law School scholar and MSNBC legal analyst Mimi Rocah told Law&Crime. “There is a connection and right now the State Dept, OMB and Trump are trying to hide it from the American people, which is obstructive.”

People for the American Way Senior Counsel Elliot Mincberg said it was another day and another piece of damning evidence against the Trump administration’s impeachment defenses.

“Yet additional evidence of improper action by Trump and the administration,” Mincberg told Law&Crime. “The House Budget Committee is concerned even beyond impeachment because of the use of budget authority to get around the Impoundment Control Act to withhold aid when they weren’t supposed to do this. This is clearly more evidence–between the committee summary and the Sandy deposition–of direct involvement by the president to withhold aid to the Ukraine right around the call pushing Zelensky to conduct these investigations into his political enemies.”

Mincberg, who previously served as the former chief counsel for oversight and investigations of the House Judiciary Committee, also said the intervention by Duffey–originally reported in early October–should have raised alarms.

“What’s also suspicious is that after Sandy’s initial order the hold was taken over by political officials at OMB and provides even more evidence that something fishy was going on,” he said.

National security attorney Bradley P. Moss summed up the day’s revelations in context of what they meant for the overall task facing the House of Representatives going forward:

The key goal of the Democrats as they move towards a Christmas-time impeachment vote is going to be messaging, and particularly explaining a rather complicated foreign policy scandal in simple and easy terms that the public writ large can digest. One of the most obvious ways to do that is to line up the factual chronology in as clear and explicit of terms as possible. Obtaining information like that which was derived from the OMB official’s deposition is just another critical piece of the evidentiary puzzle that will be put forward not only in the context of the House vote but even more prominently in the (likely) Senate trial.

“This is just another piece of information in an avalanche of evidence to support that aid was in fact conditioned on doing that favor, that is, condition aid in exchange for political dirt on the Bidens, that the U.S. president asked for on the call,” explained former New Jersey prosecutor and current Law&Crime Network host Bob Bianchi.

“OMB takes its orders from the White House,” Bianchi continued. “The call on July 25 to Zelensky alone is all that is needed by any fair minded person to show an attempt to solicit a solely personal political favor for a thing of value before aid would be released.”

Bianchi also took a shot at “intellectually dishonest” defenses of the president:

The withholding of monies by OMB was the “substantial step” in furtherance of that conspiracy… Those defending the U.S. president are manipulating the citizens to the obvious facts here. It is just intellectually dishonest not to see that this is the case. The call to Zelensky alone is all that is needed to know what was happening. But, last week’s testimony just adds to the darkness of it all.

In October 2019, while answering a question from Jonathan Karl of ABC News about why the Ukraine aid was withheld, Mulvaney blurted out, “Did [President Trump] also mention to me in the past the corruption that related to the DNC server? Absolutely. No question about that. But that’s it, and that’s why we hung up the money.”

“So the demand for an investigation into the Democrats was part of the reason that he ordered to withhold funding from Ukraine?” Karl followed-up.

“The look back to what happened in 2016, certainly, was part of the things that he was worried about in corruption with that nation, and that is absolutely appropriate,” Mulvaney responded, seemingly unaware that he had just torched the White House’s oft-echoed defense. “We do it all the time with foreign policy.”

Mulvaney later attempted to walk that back.