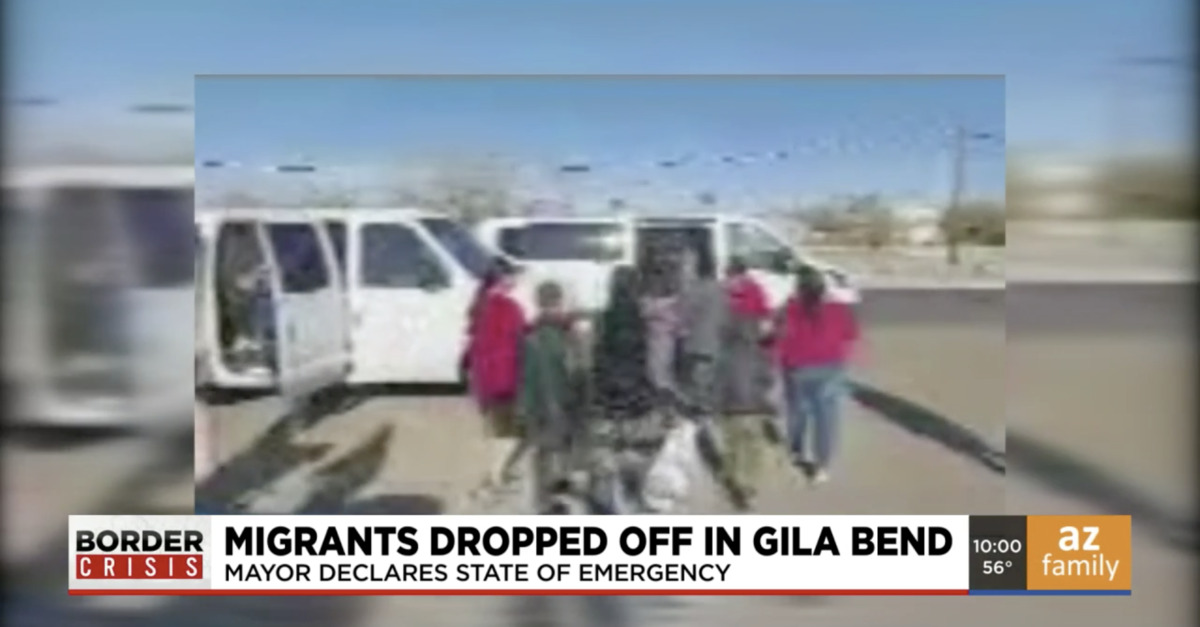 U.S. Customs and Border Protection (CBP) is currently dropping newly arriving immigrant families into tiny desert towns without the necessary resources or infrastructure to care for them, several Arizona television stations have reported. Earlier this week, Gila Bend, Ariz., a community with a population hovering just around 2,000 residents, unanimously a declared a state of emergency in response to the CBP’s most recent alleged activity. On Monday night, 16 immigrants from Venezuela and Chile were dropped off in the middle of a local park. Each family had children with them.

According to local CBS affiliate KPHO-TV, the solitary desert drop-offs are nothing new and appear to be increasing apace as part of an intentional effort. Officials there say it’s cruel and have offered macabre predictions about the results of that policy.

“To drop people in basically the middle of nowhere, it’s 30 miles to the next type of town, and that’s 30 miles of open desert,” Mayor Chris Riggs told the station. “So especially come July and August, we’re going to be finding bodies.”

Riggs said the issue is the town’s lack of ability to care for the expected number of people arriving. Gila Bend doesn’t have a single hospital or shelter. He and his wife recently used “loaned vans to drive the families themselves to the Phoenix Welcome Center so they would have a safe place to stay,” KPHO notes.

Reporter Briana Whitney asked what guidance Border Patrol had given the small and isolated community about the federal agency’s plans.

“They said it would be easy for us to see two drops per week,” Riggs said.

“For a year?” Whitney pressed.

To which Riggs replied: “Oh, this is indefinite. I can’t tolerate the thought of little kids having to walk through the hot desert.”

“The thing is, Border Patrol has long implemented punitive policies to deter migration,” Angelo Guisado, staff attorney at the Center for Constitutional Rights told Law&Crime. “In 1994 they used ‘prevention through deterrence’ to force migrants to cross through the harshest terrain possible—it costs hundreds of migrant lives every year. Now, once they arrive, they’re leaving them in remote, underresourced areas, forcing a second or third leg to safety–it’s needlessly cruel. And, the real kicker is, who is responsible for search, rescue, and safekeeping if these individuals get lost out there? That same agency that imperiled them in the first place: Border Patrol.”

Guisado, who represents the Tucson-based humanitarian collective No More Deaths, recently filed FOIA litigation in the Southern District of New York demanding that the federal government produce documents relating to Border Patrol’s search and rescue efforts in the Sonoran desert.

“This is a common tactic we used all the time even back in my day,” tweeted former Border Patrol agent Jenn Budd. “Agents get mad if they are forced to follow the law [and] parole people into the country. It is cruel [and] done out of spite.”

This is a common tactic we used all the time even back in my day. Agents get mad if they are forced to follow the law & parole people into the country. It is cruel & done out of spite. Border Patrol Is Dropping Migrant Families in Arizona Desert Towns https://t.co/bKWO0wtPWP

In this case, however, it appears the agents are following agency directives. Fronteras Desk immigration reporter Michel Marizco and local officials in Arizona note that the current practice is actually a policy enacted by the Biden administration — and one that differs substantially from what even the Trump administration did.

That change only occurred earlier this year.

“The border patrol has taken the position in 2021 that they are releasing asylum seekers or family units where they are essentially apprehended,” Pima County Administrator Chuck Huckelberry recently told local radio station KTAR-FM.

Marizco recently explained the extent of the change:

[T]his is a dramatic shift from 2019. In 2019, Immigration and Customs Enforcement, also under Homeland Security, would simply drive asylum seekers over to some of the various migrant shelters that have opened their doors to these folks, including churches here in Tucson, in the city. This time, Customs and Border Protection has told Pima County that they have to drop people off within 35 miles of where they were apprehended. So this means some of those people are being apprehended in the most remote parts of Pima County and Yuma County and Pinal County.

“Border Patrol let us know that they were going to be dropping migrants that had been detained for 72 hours in our town, which we really didn’t understand because we have nothing here,” Riggs recently told Fox News. “We have no charity organizations that can help, no non-governmental organizations that a lot of the larger cities and towns do have to assist these people.”

[image via screengrab from KPHO/KTVK]