Texas Sheriff Announces Investigation into Gov. DeSantis’ Martha’s Vineyard Operation. Here Are the Laws That May Be Relevant. 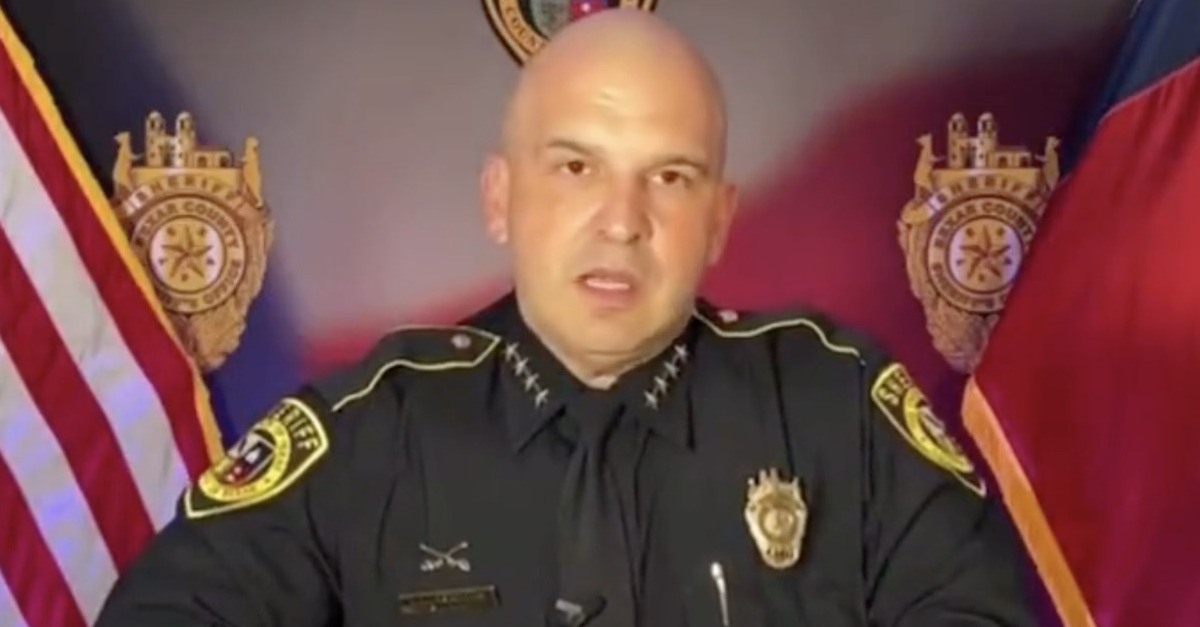 “What infuriates me the most…”

Bexar County Sheriff Javier Salazar isn’t pulling punches. His office is opening an investigation into the migrant flight from Texas to Florida and finally to Martha’s Vineyard. pic.twitter.com/Dq1GDfGQvi

Sheriff Javier Salazar spoke publicly about his department’s take on the incident.

“On Wednesday, Sept. 14, in San Antonio, a Venezuelan migrant was paid what we would call a ‘bird-dog fee’ to recruit approximately 50 migrants from the area around a migrant resource center,” Salazar explained.

By using this paid recruiter, Salazar said, 48 migrants were  “lured under false pretenses” into first staying at a hotel, then being shuttled onto an airplane to Florida and ultimately to Martha’s Vineyard. Salazar emphasized his intentional use of the word “lured,” and said that the migrants were falsely promised work and solutions to other problems before being “unceremoniously stranded in Martha’s Vineyard.”

Salazar did not speak DeSantis’ name directly, but the implication was clear.

“Somebody saw fit to come from another state, hunt them down, prey upon them, and then take advantage of their desperate situation just for the sake of political theater, just for the sake of making a statement,” Salazar angrily said, adding that the the culprit coordinated the operation “for little more than a photo op.”

The DeSantis administration admitted to having paid an aviation company, Vertol Systems Company Inc., $615,000 to transport the migrants from San Antonio to Florida first, and then on to Martha’s Vineyard.

It wasn’t immediately clear which Texas criminal statutes the sheriff’s office may be analyzing. The word “lure” only appears once in Texas’ penal code: in a disorderly conduct chapter that criminalizes using live animals as lures in dog race training.

Though many have criticized DeSantis for transporting the migrants, no Texas statute seems an obvious fit for the known facts.

It is unlikely that DeSantis or anyone else could be prosecuted for “kidnapping” the 48 migrants. Under Texas law, kidnapping requires that the actor “restrain” the victim — in other words, restricting the victim’s movements without consent. The kidnapping law does specify that consent obtained through “force, intimidation, or deception” is not effective consent for purposes of the statute, but by all accounts, the migrants appear to have boarded the planes voluntarily, even if under false pretenses.

Based on the facts publicly available, there is no indication that the Venezuelan migrants were transported for the purpose of forced labor, sexual or otherwise. In fact, Salazar’s public statement that DeSantis arranged the operation as a “photo op” tends to suggest that his office believes media coverage of the transportation was itself the end goal of DeSantis’ actions. Without more to support an intent of forced labor or services, it seems unlikely that the trafficking statute could successfully be used to prosecute DeSantis or anyone else for the incident.

Sheriff Salazar also described the migrants as being “exploited.”

“Exploitation” is more broadly defined than “trafficking,” as it criminalizes “improper use” of victims “for personal benefit, profit, or gain.” But § 32.53 only applies to children, elderly, and disabled victims — which may encompass only some of the 48 Venezuelan migrants stranded in Martha’s Vineyard. Of those who do fall within the scope of actionable victims, however, it remains to be seen if a “photo op” would constitute “personal benefit” sufficient to support prosecution.

Whether the treatment of the migrants rises to the level of statutory “improper use” would be a question for the fact finder. Certainly, using trickery to entice dozens of individuals to travel long distances could be considered “improper,” but it would be up to an attorney make a convincing argument before a judge or jury.

Journalist Judd Legum published copies of a brochure used in the operation that he called “so haphazardly put together that it doesn’t even include the real Massachusetts flag.”

15. BTW, this was a brochure (right) that was so haphazardly put together that it doesn’t even include the real Massachusetts flag (left)https://t.co/MXdhOY0s89 pic.twitter.com/y43YiQOBY1

In a hypothetical prosecution for exploitation, this brochure could be submitted as evidence of both intent and method of the migrants’ transportation. It promised the migrants benefits such as food, clothing, job training, housing assistance, education, assistance with social security cards, and cash — though none of these benefits would actually be available to those being transported.

The individuals who traveled to Martha’s Vineyard are asylum-seekers seeking protection from the authoritarian regime in Venezuela. As such, they are legally permitted to remain in the United States while immigration courts hear their cases. If granted refugee status, they would at that time be entitled to resettlement benefits.