‘As Far as I’m Concerned, That’s the End of It’: Skeptical Special Master Presses Trump’s Lawyers on Declassification Evasions at Hearing 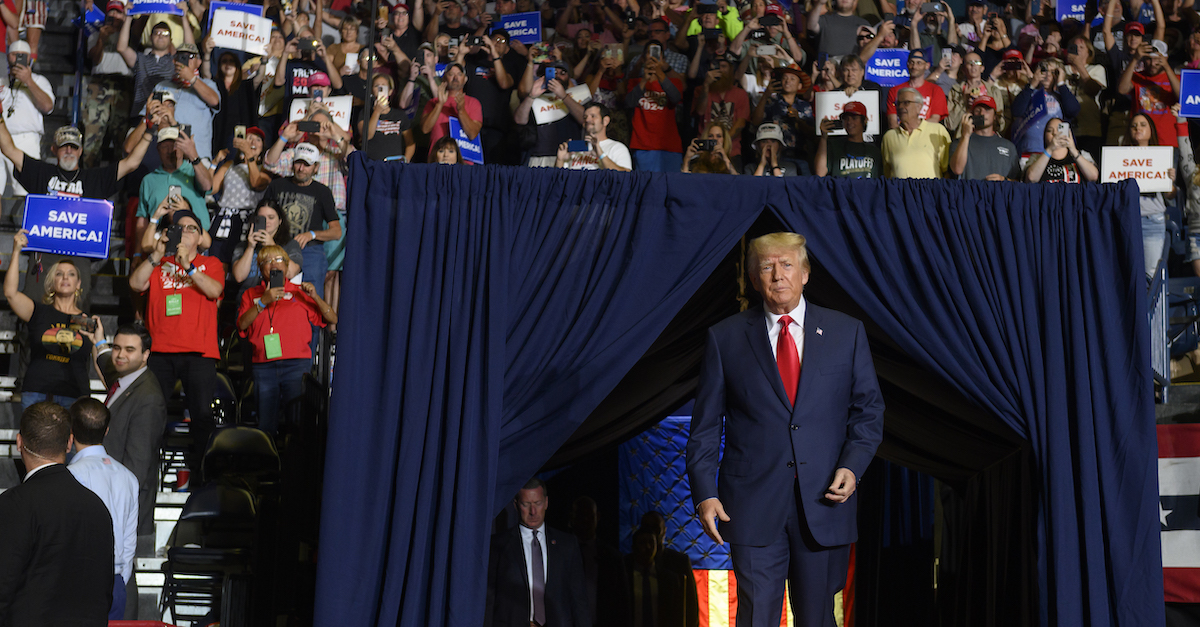 Former President Donald Trump enters the stage at a Save America Rally at the Covelli Centre on Sept. 17, 2022 in Youngstown, Ohio. (Photo by Jeff Swensen/Getty Images)

After the FBI found highly classified documents inside his Mar-a-Lago home, former President Donald Trump sought review of the materials by a special master. Now that his choice for that position has been appointed, Trump’s attorneys struggled in their efforts to have the review process play out in the way they prefer.

On Tuesday, a skeptical Senior U.S. District Judge Raymond Dearie pressed Trump’s lawyers repeatedly on their refusal to disclose whether he declassified any of the documents he brought to Mar-a-Lago — and if so, which ones.

“The government gives me prima facie evidence that these are classified documents,” Dearie said, referring to the plain markings on the records. “As far as I’m concerned, that’s the end of it.”

On the eve of the hearing, Trump’s lawyers had filed a four-page letter urging Dearie to back off from his demand that they disclose declassification arguments.

“We respectfully submit that the time and place for affidavits or declarations would be in connection with a Rule 41 motion that specifically alleges declassification as a component of its argument for return of property,” Trusty wrote in the filing. “Otherwise, the Special Master process will have forced the Plaintiff to fully and specifically disclose a defense to the merits of any subsequent indictment without such a requirement being evident in the District Court’s order.”

Dearie said he agreed that Trump’s lawyers have the right to assert that position, but he suggested that they would have to live with the consequences of that course of action.

“You can’t have your cake and eat it,” the judge said.

Throughout the litigation, top Justice Department officials — including Jay Bratt, the chief of Counterintelligence and Export Control Section in National Security Division, and U.S. Attorney Juan Antonio Gonzalez — have noted that Trump’s legal team has danced around the declassification issues. Their legal briefs have not said that Trump declassified any of the documents, which were marked “Top Secret” and above. The lawyers only said that Trump may have declassified them.

During Tuesday’s hearing, the judge needled Trump’s lawyers on what he’s supposed to do in light of the fact that the government provided “prima facie evidence” of classification, such as the markings on the documents.

“As far as I’m concerned, that’s the end of it,” Dearie said.

When Dearie spoke offhandedly of lawyers’ “litigation strategy,” Trusty played down the notion that he was engaged in “gamesmanship.” Trusty denied the implication.

Under the terms of the order of U.S. District Judge Aileen Cannon, a Trump appointee, the special master’s review should be completed some time after Thanksgiving. Trump’s attorneys have asked Dearie to extend the deadline.

Dearie appeared to recognize that he is on a time crunch — and seemed unlikely to budge from it.

“I’m going to do the best I can with the time available to us,” Dearie said.

The Department of Justice has a pending appeal before the 11th Circuit, seeking an emergency stay that would prevent the government from having to disclose the classified documents for review. The stay also seeks to allow them to continue scrutinizing the documents in their ongoing criminal investigation.

Julie Edelstein, the Deputy Chief of the Counterintelligence and Export Control Section of the Justice Department’s National Security Division, said Tuesday that the DOJ will explore further appellate options if the 11th Circuit denies the stay. She noted that the government’s view is that it’s the “current executive branch’s decision only” whether the documents are classified.

Former federal prosecutor Mitchell Epner, now a partner at Rottenberg Lipman Rich PC, noted that if the Justice Department loses that bid, the review of classified documents could pose a problem given the composition Trump’s legal team.

Trusty asserted that he has “TS clearance,” short for “Top Secret.” Edelstein said that the lawyer would also need to have a “need to know,” a position that Trusty called “astounding” in reference to a former president’s counsel.

Another of Trump’s top lawyers, Christopher Kise, was a registered foreign agent of the Venezuelan government under strongman Nicolás Maduro during his tenure with the firm Foley & Lardner LLP. Foreign lobbying records indicate that Kise advocated for a relaxation of sanctions in discussions with officials at the Office of Foreign Assets and Control.

In recent days, Trump has vilified the National Archives and Records Administration (NARA) as “Radical Left-controlled” in a statement released through Save America, his political action committee. Trusty echoed that rhetoric in court, calling the agency “highly politicized” and claiming that they put content warnings on the U.S. Constitution (Fact-checkers note that the claim misses key context.)

Simmering down the accusations, Dearie said: “I think you’re painting them with a broad brush there.”

But the judge noted that he currently sees no need to solicit their views on the dispute.

If he does, Dearie said, he will give Trump’s legal team an opportunity to make themselves heard.