With Charges Dropped, Attorney For Amy Cooper Threatens ‘Legal Consequences’ For Those Who ‘Rushed to the Wrong Conclusion’ 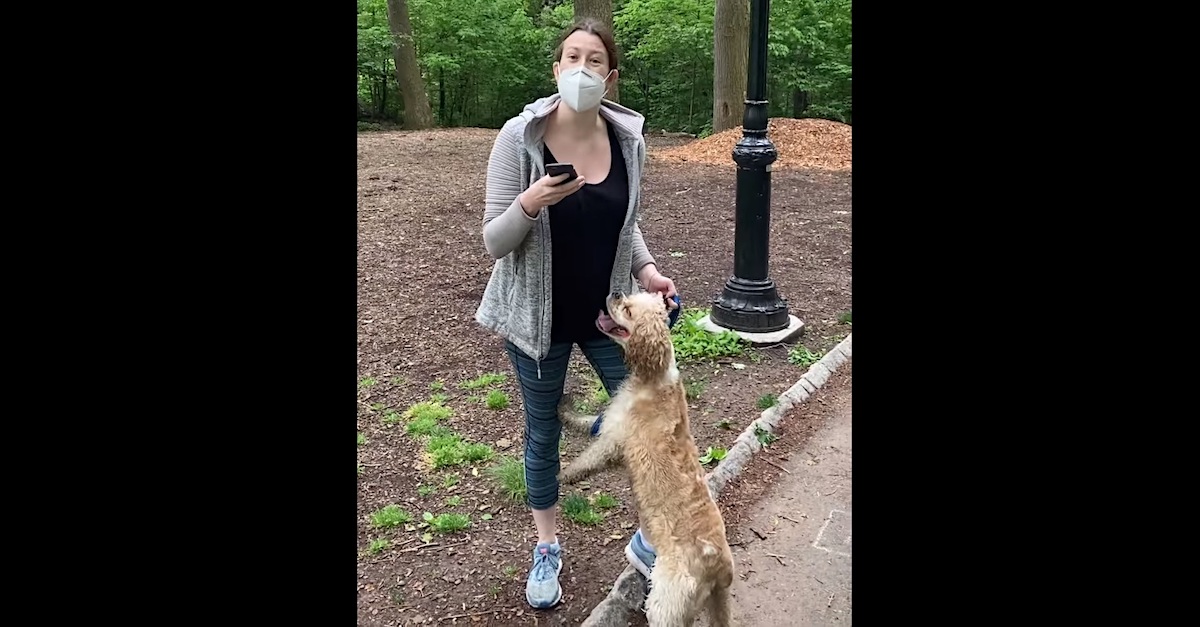 Manhattan prosecutors on Tuesday dropped criminal charges against Amy Cooper, the New York City woman who went viral last year after she was recorded calling 911 and accusing Christian Cooper, a Black bird-watcher, of threatening herself and her dog in Central Park. However, following a hearing in Manhattan Criminal Court, Amy Cooper’s attorney, Robert Barnes, suggested that litigation stemming from the incident is far from over.

“After a thorough and honest inquiry, the New York District Attorney’s office concluded the appropriate outcome of this matter was complete dismissal of all charges. We thank them for their integrity, and agree with the outcome,” Barnes said in a statement to Law&Crime. “Many others rushed to the wrong conclusion based on inadequate investigation, and for some, there may be legal consequences coming.”

According to the New York Times, prosecutors agreed to dismiss the charge of filing a false police report after Cooper completed a five-session therapeutic educational program that included a racial bias component. Assistant District Attorney Joan Illuzzi-Orbon said Cooper’s therapist called their sessions a “moving experience” and confirmed that Cooper “learned a lot” from the restorative justice program.

The rehabilitative program was suggested last October when Amy Cooper was first charged.

Despite only one call becoming famous online, Amy Cooper is said by prosecutors to have twice called 911.  In a different call, prosecutors said Amy Cooper accused Christian Cooper of attempting to assault her.

“Office is committed to safety, justice, and anti-racism, and we will hold people who make false and racist 911 calls accountable,” said Manhattan District Attorney Cy Vance Jr. in a statement last October when the charges were filed.

Christian Cooper refused to cooperate with prosecutors; he said the public shame and job loss suffered by Amy Cooper was enough of a punishment.

Despite having the same last name, Amy Cooper and Christian Cooper are not related.

Barnes, who has previously written columns for Law&Crime, was also one of the lawyers who represented Covington Catholic students in a defamation lawsuit against various public and media figures.  He previously told Law&Crime that he believed his client had a solid case against her former employer, Franklin Templeton Investments, for defamation and wrongful termination.

“Sixty seconds of panic in a park in response to a stranger saying he is about to do something to a woman alone in the park that ‘you won’t like’ cost a lady her job, her public reputation, and her livelihood, even after she apologized for her reaction. Her employer promised to conduct a fair investigation, then publicly rushed to join the reputational lynch mob of their own employee,” Barnes told Law&Crime in May. “Amy Cooper enjoys potential legal claims against her employer for defamation because they gave the world the impression they conducted an impartial investigation that led them to conclude her motivations were malevolent racism within the employment setting when they conducted no such investigation and no such information would support such a conclusion.”

But Christy Hull Eikhoff, a partner at the Alston & Bird law firm and a defamation expert, told Law&Crime that although the Covington and Amy Cooper cases do have some similarities, characterizations of Cooper as racist would fall under “subjective opinion” and therefore not be defamatory.