Will Gun-Wielding St. Louis Attorneys Be Able to Hide Behind the State’s ‘Castle Doctrine’? 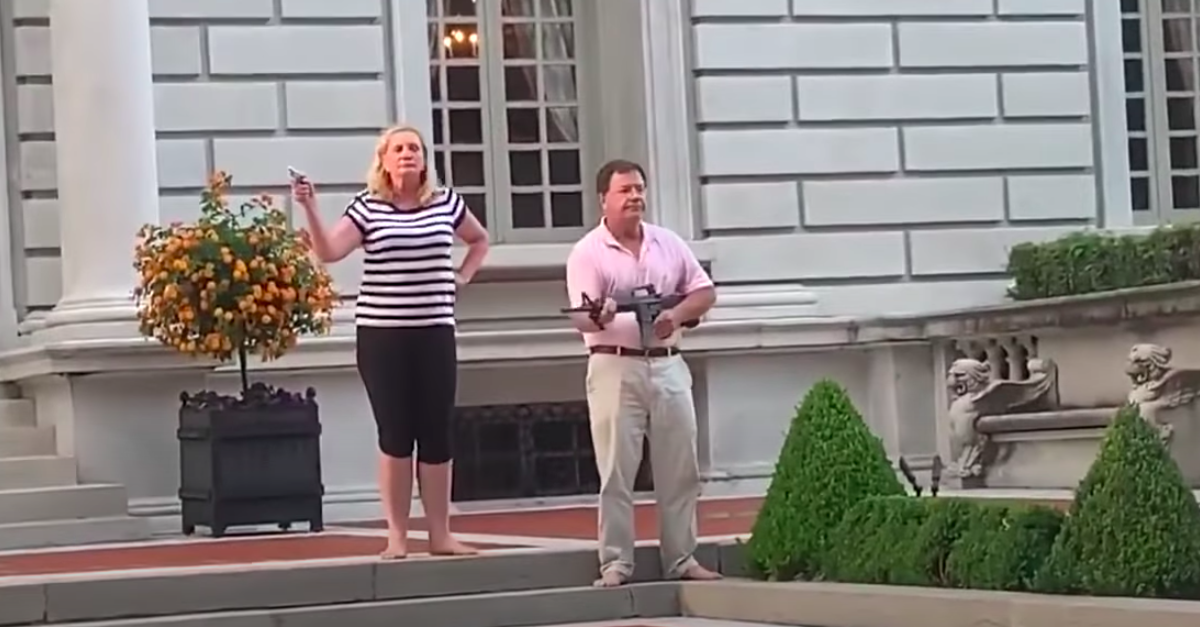 The St. Louis couple who went viral after an array of photos and videos showed them aiming firearms at protestors marching without permission through their private, gated community and toward the mayor’s mansion made national headlines over the weekend. The encounter sparked controversy and debate surrounding Missouri’s “castle doctrine,” particularly among conservative commentators who defended the couple’s actions as being a lawful exercise of their right to defend their home. Several law professors on Monday argued, however, that the castle doctrine does not apply to the couple’s conduct.

A couple has come out of their house and is pointing guns at protesters in their neighborhood #StLouis #lydakrewson pic.twitter.com/ZJ8a553PAU

Depending on the individual state, a “castle doctrine” or castle law generally provides citizens the right to use force—sometimes even deadly force—to defend their homes without first attempting to retreat. Missouri maintains a broad castle law, permitting citizens to use physical force “to the extent he or she reasonably believes such force to be necessary to defend himself or herself or a third person from what he or she reasonably believes to be the use or imminent use of unlawful force by such other person,” with certain exceptions.

In a statement released through their lawyer, Mark McCloskey and Patricia McCloskey, both of whom are themselves attorneys, claimed that they witnessed “violence, destruction of property and acts of threatening aggression” by some of the protestors which “gave rise to trepidation and fear of imminent and grave” harm.

JUST IN: St. Louis attorneys Mark and Patricia McCloskey release a statement, through an attorney, saying they support Black Lives Matter and they acted lawfully on their property. The couple, through their attorney, says "the agitators responsible for the trepidation were white" pic.twitter.com/4zebQqSH0y

But according to law professors, the statement is unlikely to serve as a defense under the state’s castle doctrine which, in subsection 3, also specifies that deadly force cannot be used unless “[s]uch force is used against a person who unlawfully enters, remains after unlawfully entering, or attempts to unlawfully enter private property that is owned or leased by an individual.”

According to Kansas University School of Law professor Corey Rayburn Yung, the McCloskeys’ case would be directly at odds with established Missouri precedent regarding the castle doctrine.

“Whereas the large majority of jurisdictions limit the castle doctrine to the boundaries of the house, MO’s is more expansive. Some commenters are reading the statute to mean that you could lawfully shoot someone who stepped onto your lawn. Despite the availability of signs saying, ‘Trespassers will be shot,’ mere trespass has not historically been a basis for using deadly force. So, does MO’s statute represent a new trend, allowing expansive use of deadly force to protect private property? No,” Yung wrote in an extensive Twitter thread.

Despite the availability of signs saying "Trespassers will be shot," mere trespass has not historically been a basis for using deadly force. So, does MO's statute represent a new trend, allowing expansive use of deadly force to protect private property? No.

The professor pointed to the 2016 case State v. Whipple, which held that subsection 3 cannot be interpreted as giving “the occupier, owner, or lessee authority to stand his ground and use deadly force without having a reasonable belief that such force is necessary to defend himself or a third person from what he reasonably believes to be the use or imminent use of unlawful force.”

There are three exceptions to that clause combined with an initial aggressor limitation, but none apply in this case. MO's statute is bit of a mess, but that's quite typical of self-defense statutes across the country. The Whipple court concluded:

imminent use of unlawful force."

Be careful taking 1 clause out of a statute and interpreting it alone.

tldr: MO law does not allow deadly force to be used to merely defend private property (excepting the home itself).
/end

John Ammann, the McDonnell Professor of Justice in American Society at Saint Louis University School of Law, told local NBC affiliate KSDK that the McCloskeys’ behavior could arguably be classified as assault, as their brandishing of weapons could reasonably have put protesters in fear of their safety.

“People have a right to threaten force if they are threatened,” Amman said. “However, if a group of protesters is walking by a home and not doing anything to the homeowners specifically, then they don’t have the right to threaten lethal force without an imminent threat.”

Kimberly Gardner, the Circuit Attorney for the City of St. Louis said Monday that she was “alarmed” by the event, which was being investigated by local authorities.