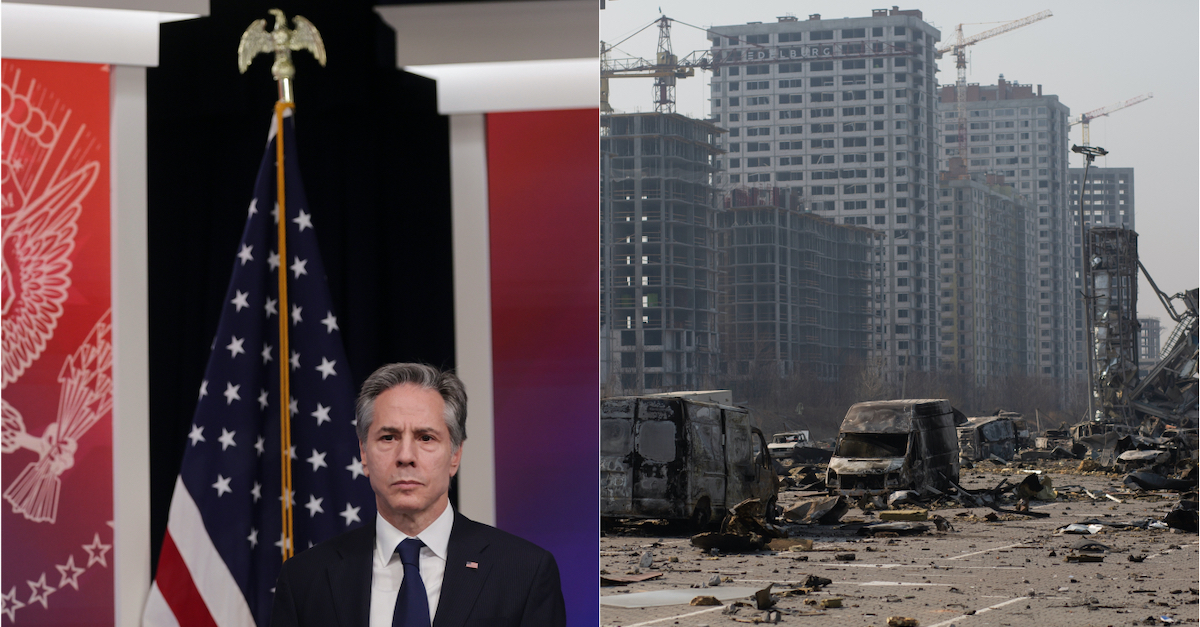 Days after President Joe Biden and his Secretary of State Antony Blinken remarked that members of the Russian armed forces committed war crimes in Ukraine, the United States formalized those opinions in an official assessment on Wednesday.

“Today, I can announce that, based on information currently available, the U.S. government assesses that members of Russia’s forces have committed war crimes in Ukraine,” Blinken wrote in a statement.

“Our assessment is based on a careful review of available information from public and intelligence sources,” his statement continued. “As with any alleged crime, a court of law with jurisdiction over the crime is ultimately responsible for determining criminal guilt in specific cases. The U.S. government will continue to track reports of war crimes and will share information we gather with allies, partners, and international institutions and organizations, as appropriate. We are committed to pursuing accountability using every tool available, including criminal prosecutions.”

“Bathed the People of Ukraine in Blood and Tears”

The declaration falls just shy of the one-month anniversary of Russia’s invasion of Ukraine, which began on Feb. 24.

Russian forces also have struck sites “clearly identifiable” as being used by civilians, including a Mariupol maternity hospital and theater in that city marked with the Russian word for “children” in “huge letters visible from the sky.”

On Tuesday, Mariupol officials estimated that more than 2,400 civilians had been killed in that city alone, according to the State Department.

“Putin’s forces used these same tactics in Grozny, Chechnya, and Aleppo, Syria, where they intensified their bombardment of cities to break the will of the people,” the State Department’s statement continues. “Their attempt to do so in Ukraine has again shocked the world and, as President [Volodymyr] Zelenskyy has soberly attested, ‘bathed the people of Ukraine in blood and tears.'”

Earlier this month on March 6, Blinken previewed his view that Russian forces committed war crimes on CNN’s “State of the Union” with Jake Tapper.

“Between Barbarism and Rule of Law”

In an interview with Law&Crime the next day, the Center on National Security’s director Karen Greenberg found Blinken’s remarks significant.

“It was meant as as a warning,” Greenberg said at the time. “Those are very harsh terms to use when coming from the secretary of state rather than coming from a journalist, a pundit or somebody like that. So I think they’re very powerful words, and it’s a warning sign.”

Greenberg declined to predict just how that warning could play out, though she added that Russian strongman Vladimir Putin “seems to be operating in a very law-free zone.”

Reached for comment on Wednesday, Greenberg added that the significance of the formal declaration is to “draw even further attention to the divide between Russia and much of the rest of the world.”

“The ICC has already said it would open an investigation into war crimes,” she told Law&Crime on Wednesday. “This underscores as well the terms of the war as being between barbarism and rule of law.”

Before today’s declaration, the U.S. reaction to Russia’s war on Ukraine has been primarily economic. Biden used his State of the Union address to announce a Department of Justice task force to pursue Russian oligarchs in response to Russia’s invasion of Ukraine, and the Treasury Department announced sanctions against Russian banks and other alleged enablers of the country’s invasion.

(Photo of Blinken by Alex Wong/Getty Images; Photo of the aftermath of an airstrike on a Ukrainian mall by Anastasia Vlasova/Getty Images)