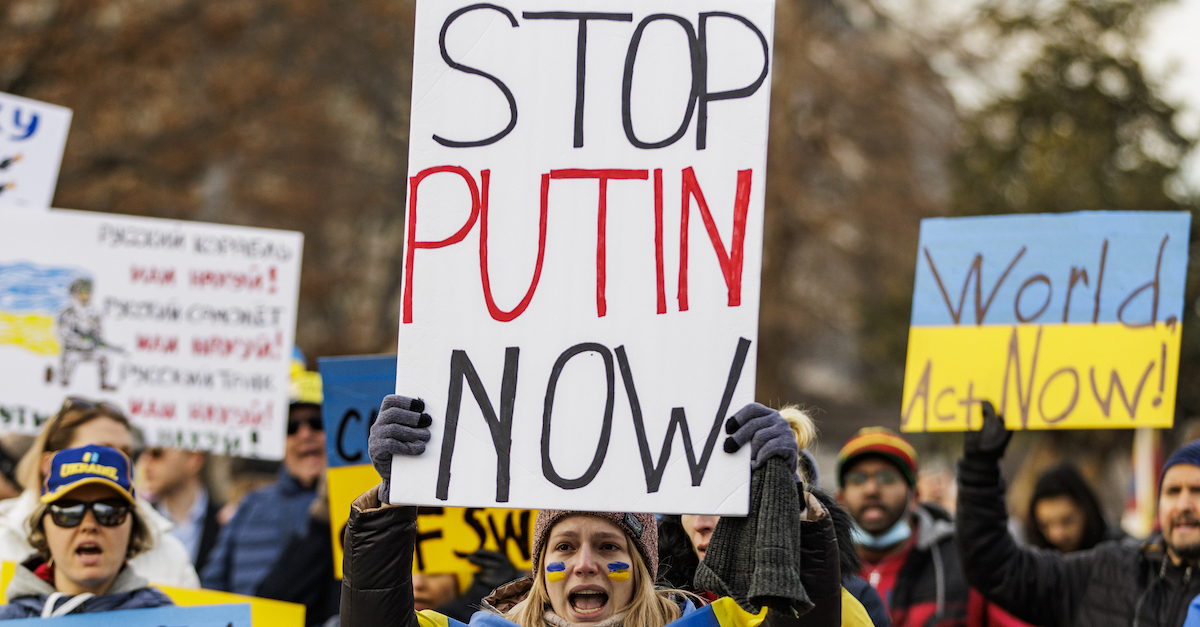 Ratcheting up the financial sanctions that followed Russia’s invasion of Ukraine, President Joe Biden announced a dedicated Department of Justice task force to go after Vladimir Putin’s oligarchs during Tuesday night’s State of the Union address: “We are joining with our European allies to find and seize your yachts, your luxury apartments, your private jets. We are coming for your ill-begotten gains,” the U.S. president declared.

Investigative journalists have long traced the opaque flows of Russian oligarch money around the world, and few have done it as tenaciously and effectively as the European collective Organized Crime and Corruption Reporting Project (OCCRP).

On the latest episode of Law&Crime’s podcast “Objections: with Adam Klasfeld,” OCCRP’s co-founder and publisher Drew Sullivan describes how Putin and his oligarchs hide their money through what he calls the “criminal services industry.”

“These law firms and banks are really helping these relatively provincial, Eastern European leaders to suddenly find that they could steal money and move it offshore, bring it back in another form and get done what they wanted to get done,” he noted.

Sullivan also details the “laborious” process through which reporters uncover assets hidden in layers of “nested,” anonymous corporations. Devastating sanctions to Russia’s most important banks prompted Putin over the weekend to effectively threaten nuclear war, a development Sullivan called a sign that the global backlash to his war on Ukraine has hit him where it hurts.

“He’s been spending a lot of time stealing money from the Russian state,” Sullivan noted. “His whole system, his whole mode of governance, is really designed on dishing out large amounts of money to siloviki, which is kind of his internal military intelligence branch, and the oligarchs, which control the industry, and organized crime. And it’s kind of a key tool he uses to govern people, control things and to manage Russia. And consequently, to suddenly have that not-so-appealing to people within his his inner circle, or to have them penalized around the world for his behavior works really, really against him.”

OCCRP has investigative editors around the world, including Eastern Europe, the Caucasus, Central Asia, the United States and Central America. They in turn partner with reporters globally to trace criminal proceeds, in investigations that they credit with sparking hundreds of criminal prosecutions, government regulatory actions, and fines and seizures totaling more than $7.3 billion in U.S. dollars. Some of that reporting was made possible by mass leaks like the Panama Papers (using files leaked to German newspaper Süddeutsche Zeitung and disseminated by the International Consortium of Investigative Journalists) and the FinCEN files (feature sensitive U.S. Treasury records of suspicious transactions disclosed to BuzzFeed).

OCCRP also recently published “Suisse Secrets,” analyzing records on more than 18,000 Credit Suisse accounts, in what they describe as the largest leak ever from a major Swiss bank.

When Russia invaded Ukraine, the topic was fresh on Sullivan’s mind.

“I think we should all remember those law firms, banks, registration agents and others that helped enable Putin and his inner circle,” he tweeted. “Swiss bankers? There is blood today on your hands. We need to get rid of the criminal services industry. They make autocracies possible.”

I think we should all remember those law firms, banks, registration agents and others that helped enable Putin and his inner circle. Swiss bankers? There is blood today on your hands. We need to get rid of the criminal services industry. They make autocracies possible.

“You’re always getting a piece of the puzzle when you get a leak,” he mused.

He noted that the subjects of their investigation, including leaders of authoritarian regimes, do not appreciate the puzzle of their murky assets being solved.

“Blood on Their Hands”

Authoritarianism and corruption often go hand in hand because strongmen do not want their secrets to be disclosed, he noted.

“We’ve had reporters basically blackmailed with kompromat, and information about their sex lives, or who they’re sleeping with, or other things, to try to get them to to back off stories,” noted Sullivan. “Fortunately, none of our reporters have, everybody comes out publicly denounces it and fights back.”

Such persecution brought global attention to OCCRP journalist Khadija Ismayilova, a winner of the Right Livelihood Award who refused to bend to the threat of blackmail from a hidden camera planted in her bedroom. Crediting evidence that the Azerbaijan’s government was trying to dissuade her from reporting on strongman Ilham Aliyev’s daughter, the European Court of Human Rights fined and censured that country for violating her privacy and freedom of expression.

“The criminal services industry not only is undermining us in terms of laws that protect these assets in the West, but they often are the ones that are suing us, or are the lawyers that are going after us in these countries. So, they’re helping their clients in these autocratic countries to attack the independent journalists and that’s why they have blood on their hands.”

Financial sanctions have linked oligarchs to human rights abuses, but Sullivan noted the yachts—as symbols of unexplained wealth—themselves could be evidence of a crime.

“Most of these people have never been anything other than a government official their whole life, which usually pays about $5,000 a month in most of these countries,” Sullivan said. “And they can never explain any of the wealth that they have. And you also have to look at family members at ex-wives. They hide many of these assets in these people’s names. And so, it’s a very laborious process. But that’s what can be seized, because that’s stuff that was stolen from the people.”

Now that the U.S. Justice Department task force has been set up for that purpose, Sullivan called the gesture overdue.

“People are dying in Ukraine, and they’re dying because in the West, we didn’t do anything about this for a very long time,” he said. “It was clear, huge amounts of money was being stolen from these countries. Russia was transferring somewhere around $160 billion a month, at its peak, into the West.”

That “opaque,” “laundered” money, he notes, has been tied to a host of social ills.

“Putin doesn’t send money from the state treasury when he wants to support Marine Le Pen, or an extremist party, or a wedge issue party. His oligarchs fund it. So, his oligarchs make all this extra money. They move the money to the West, and then, that becomes basically a bad actor in the West, funding extremism, hate groups, propaganda, anti-democratic processes. These people have been anti-democratic from the very beginning. They don’t know what democracy is.”