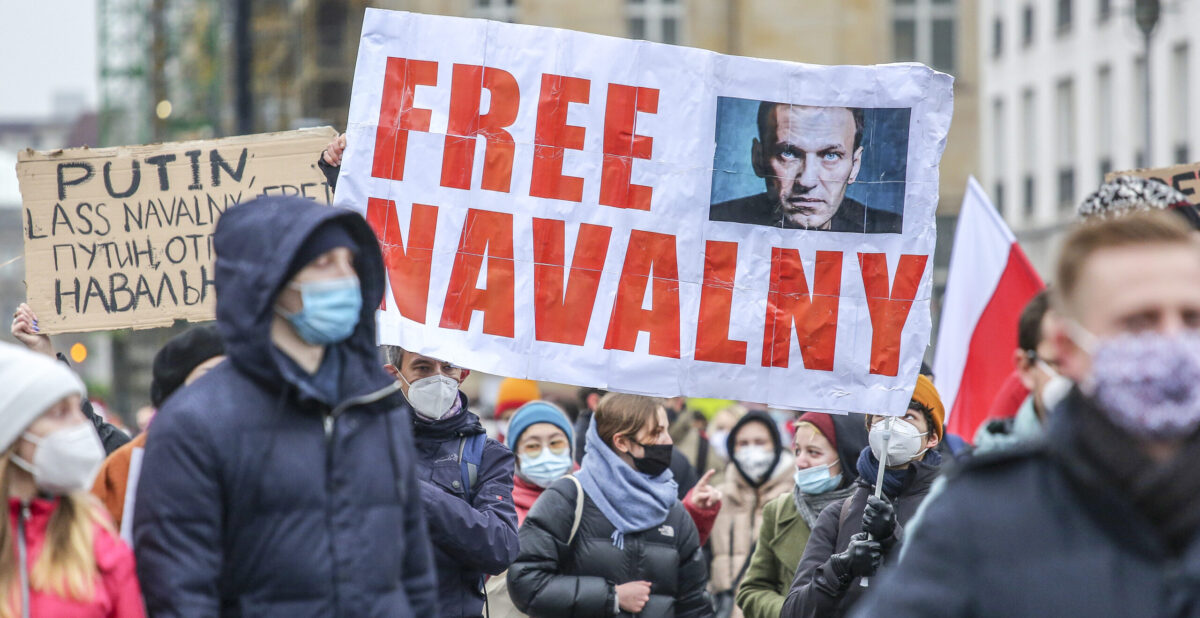 Protesters hold a banner reading “FREE NAVALNY” as some 2,500 supporters of Russian opposition politician Alexei Navalny march in protest to demand his release from prison in Moscow on Jan. 23, 2021 in Berlin, Germany.

The United States and European Union rolled out sanctions against Russia on Tuesday for poisoning and imprisoning Russian opposition leader Alexei Navalny.

In August, Navalny was poisoned with Novichok nerve agent in an attack which the investigative news organizations Bellingcat and The Insider—in cooperation with Der Spiegel and CNN—reported bore the hallmarks of operatives from Federal Security Service (FSB), Russia’s key intelligence agency and main successor to the KGB. On Monday, two U.N. investigators noted that toxicology tests conducted in Germany, France, Sweden and by the Organization for the Prohibition of Chemical Weapons found the presence of this same nerve agent, which was developed by the Soviet Union and Russia.

“We believe that poisoning Mr. Navalny with Novichok might have been deliberately carried out to send a clear, sinister warning that this would be the fate of anyone who would criticize and oppose the Government,” Agnès Callamard, the special rapporteur on extrajudicial executions, and Irene Khan, the special rapporteur on freedom of expression, wrote in a statement. “Novichok was precisely chosen to cause fear.”

After being whisked away to Germany in a coma, Navalny returned to Russia in January, where he was promptly arrested.

“The United States has consistently characterized the legal offensive against Mr. Navalny as politically motivated, an assessment shared by our G7 partners and the European Court of Human Rights,” Blinken said, reiterating the Biden administration’s call to “immediately and unconditionally” release Navalny.

In the latest round of U.S. targeted sanctions, the Treasury Department designated seven senior Russian officials and 14 entities.

The European Union says that their separate action marks their first use of the new EU Global Human Rights Sanctions Regime, which was established late last year on Dec. 7. They impose restrictive measures on four people, including a travel ban and asset freeze.

The GRU, Russia’s military intelligence agency implicated in 2016 U.S. election interference, has also been sanctioned in connection to Navalny.

House Speaker Nancy Pelosi heralded the announcement as a departure from the Trump era.

“President Biden is sending a strong and unmistakable message to the Kremlin and to the world: that the era of impunity for Moscow’s assault on the rule of law is over,” the California Democrat said in a statement.

“For years, Russia has accelerated a deadly campaign to jeopardize international security, erode human rights and undermine democracy, both within its borders and around the world,” Pelosi added. “The attempted murder of anti-corruption activist Alexei Navalny is a profound violation of human rights that demonstrates Moscow’s utter determination to silence the voices of reform.”

Amnesty International withdrew Navalny’s designation as a “prisoner of conscience” after the rights group described being “bombarded” with complaints of his past xenophobic comments that he had not renounced. Navalny’s defenders say that he has been subjected to a smear campaign by a Kremlin eager to discredit him.