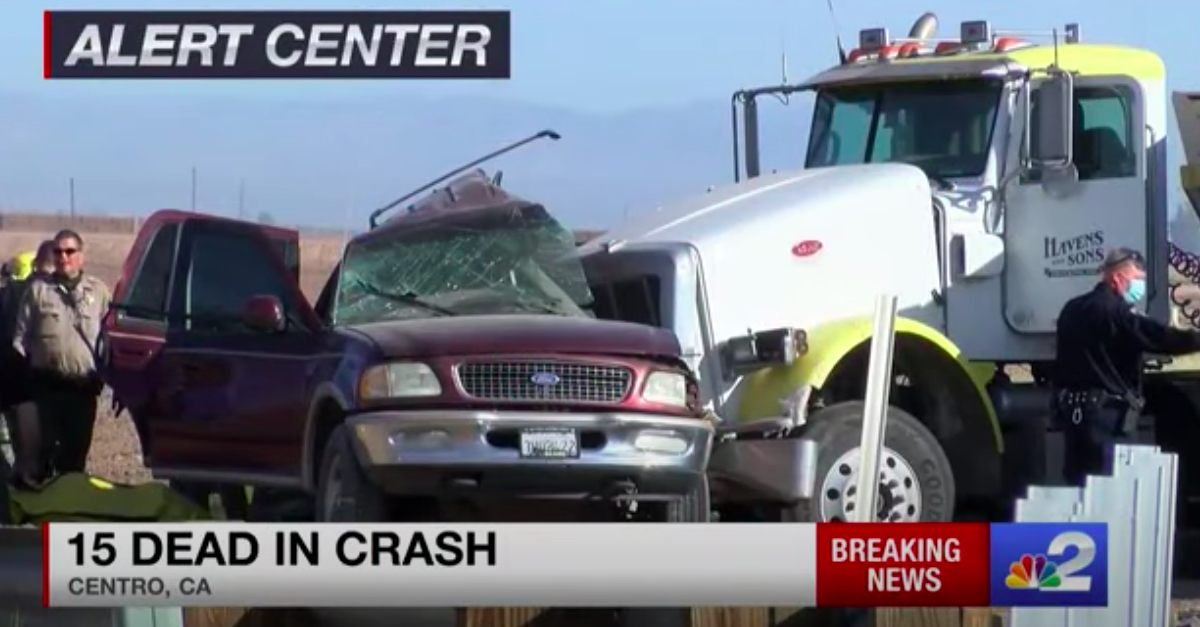 Officials in Imperial County, California said that a collision involving an overloaded SUV and a semitruck resulted in at least 13 deaths and multiple hospitalizations.

Several news outlets have reported that the SUV involved in the accident—a Ford Expedition—was packed with 25 passengers when it struck a semitruck loaded with gravel Tuesday morning. Deputy Fire Chief Sal Flores told the LA Times that the “mass fatality incident” occurred at 6:16 AM on Highway 115 in Holtville, approximately 100 miles east of San Diego. The death toll was initially reported as 15 and the number of passengers as 27.

#ImperialValley All lanes of NB & SB SR-115 at
Norrish Rd closed due to a traffic collision. pic.twitter.com/kAuSMnZTQa

The maximum capacity of a Ford Expedition is eight passengers.

According to a CNN report, California Highway Patrol Officer Arturo Platero said the Expedition and its 25 passengers were traveling west on Norrish Road when the vehicle crossed Highway 115, placing them “in the direct path” of the northbound gravel-filled truck.

During a Tuesday afternoon press conference, California Highway Patrol (CHP) Border Division Chief Omar Watson said that they were still trying to determine the speed of the vehicles at the time of impact and the cause of the accident. CHP confirmed that the driver of the SUV perished in the crash and said an unknown number of passengers were “ejected” from the SUV as a result of the collision. The number of passengers ejected was not clear, though CHP said at least some of the people ejected had died while others died inside the vehicle. The seating arrangments of those inside the SUV remains unclear.

Judy Cruz, the managing director of the Emergency Room Department at El Centro Regional Medical Center said that 14 people were pronounced dead at the scene. Seven patients were transported to El Centro Regional, one of whom died just before arriving at the hospital, officials said. Four patients were taken to Desert Regional Medical Center in Palm Springs. According to a report from local news outlet FOX 11, three of those four were admitted to the hospital’s intensive care unit while the condition of the fourth remains unknown. An additional two patients were being treated at Pioneers Memorial Hospital.

The ages of the injured passengers ranged from 16 to 55 years old, while those who died were between the ages of 20 and 55.

“Patients are going through a difficult time as you can imagine,” Adolphe Edward, the CEO of El Centro Regional Medical Center, told CNN. “This was a major accident and we are taking care of them in the emergency room department.”

CHP said that border patrol was assisting with the investigation into the crash, mostly providing translation services.

Macario Mora, a spokesman for Customs and Border Protection (CBP) told the Associated Press that the immigration status of the SUV passengers was currently unknown and under investigation.

“It was an unusual number of people in an SUV, but we don’t know who they were,” Mora said, adding, “They might have just been farm workers.”

Officials with the Imperial County Fire Department told ABC7 that the crash resulted in a second-alarm response, meaning that there were “25 additional personnel called to the scene along with at least four additional ambulances and four air helicopters.”

Footage of the wreck’s aftermath was posted to YouTube by NBC2 News: