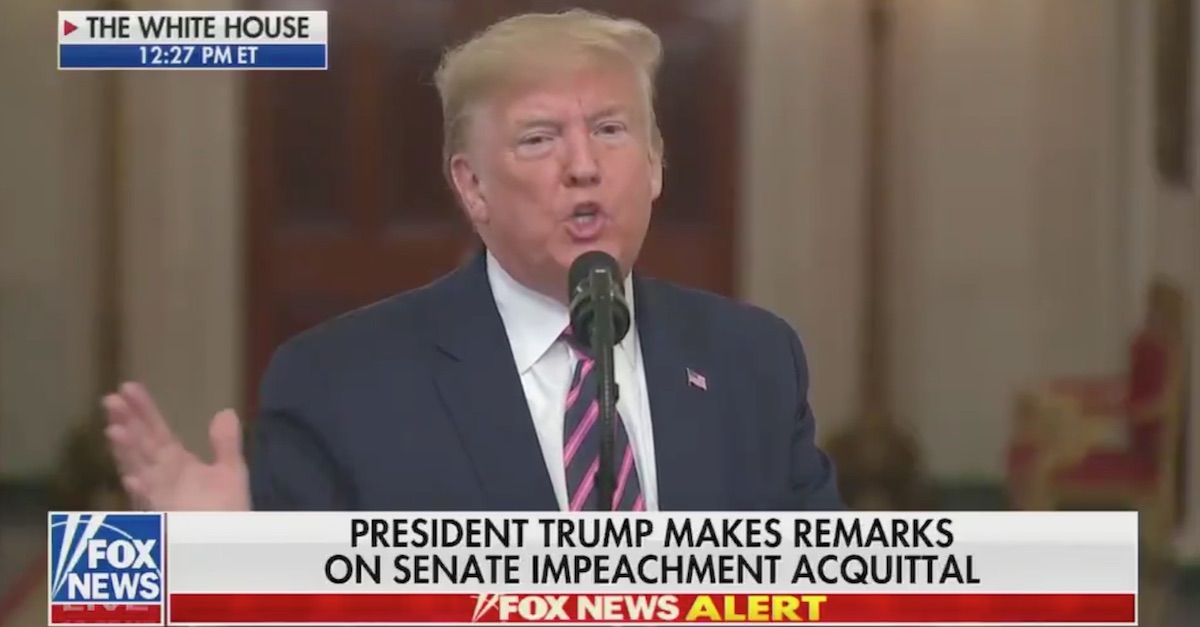 President Donald Trump celebrated the impeachment acquittal delivered to him by the Republican-led Senate by saying a “bullshit” campaign to topple his presidency all began with “Russia, Russia, Russia.”

“We were treated unbelievably unfairly. You have to understand, we first went through ‘Russia, Russia, Russia’. It was all bullshit,” Trump said.

Trump on national TV: "We were treated unbelievably unfairly. You have to understand, we first went through 'Russia, Russia, Russia'. It was all bullshit." pic.twitter.com/WKGsCk4D0C

“Had I not fired James Comey, who was a disaster by the way, it’s possible I wouldn’t even be standing here right now. We caught him in the act. Dirty cops, bad people,” the president also said. “This should never ever happen to another President, ever.”

The Trump address to a room full of Republicans was basically a who’s who of individuals who supported the president throughout the impeachment inquiry and everything else (i.e., basically everyone but Mitt Romney). “Successful” Sen. Mike Braun (R-Ind.), “scary voice” Sen. Chuck Grassley (R-Iowa), “the guy” Sen. Josh Hawley (R-Mo.), “difficult” Sen. Mike Lee (R-Utah), “fantastic” Senate Majority Leader Mitch McConnell (R-Ky.), “Future Speaker of the House” House Minority Leader Kevin McCarthy (R-Calif.), and many others got shoutouts from the president.

Braun, who has been pictured with Lev Parnas, was recently asked, “So you’re saying that it’s okay for a President to ask a foreign leader to investigate a political rival and withhold foreign aid to coerce him into doing so?”

Hawley introduced a resolution to change Senate rules and “allow dismissal of articles of impeachment for failure to prosecute.”

McConnell engineered a Senate trial that did not include new witnesses and documents.

McCarthy tore up the articles of impeachment.

It seems none of these things went unnoticed. The president endorsed them all.

President @realDonaldTrump: "A man who just became a Senator, he's a little like me – we have a few of them – very successful guy in business who said, 'What the hell, I'll run for the Senate from Indiana' […] and I got behind him, and Mike Braun you have done some great job." pic.twitter.com/p1mvCT7lMt

The president talking a trip to a "great place, Missouri" to interview people for the US Senate.

"The first one I met was Josh Hawley."

Says that after 10 minutes, he said, "Don't show me anybody else. This is the guy."

Trump now claiming that Kevin McCarthy will become Speaker of the House because of the impeachment process.

Trump also took a moment to acknowledge the work his legal team put in.