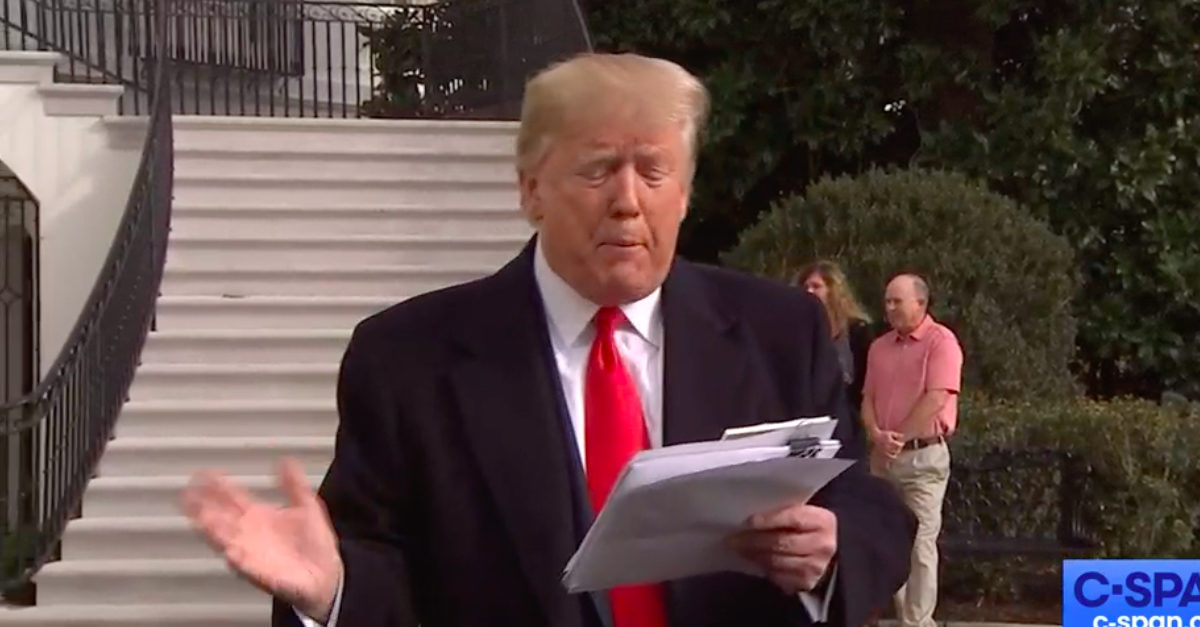 A clearly frustrated President Donald Trump attempted to rebut the bombshell impeachment testimony from the Gordon Sondland, saying his handpicked ambassador to the European Union was not someone he “knew well.” During the morning session of the public impeachment inquiries, Sondland confirmed the existence of a quid pro quo deal, saying that Trump, through Rudy Giuliani, explicitly directed him and other administration officials to get Ukrainian president Volodymyr Zelensky to publicly announce investigations into Burisma and the CrowdStrike conspiracy theory.

Speaking to reporters from the South Lawn of the White House and reading from notes handwritten in black Sharpie marker, Trump continued to claim that he did not condition congressionally appropriated military aid to Ukraine on any act from the Ukrainian government.

“I’m gonna go very quickly, just a quick comment on what’s going on in terms of testimony with Ambassador Sondland. And I just noticed one thing and I would say that means it’s all over,” Trump said.

The president, reading directly from his notes, then began to respond to portions of Sondland’s testimony.

Trump then turned the page on his notes and began repeating the words on the page multiple times.

Donald Trump seized upon one particular bit of testimony from Gordon Sondland's hearing today. The EU envoy testified that the president told him "I want nothing" from Ukraine, and "I want no quid pro quo."

The president then strayed from his notes to state that he didn’t really know Sondland very well, likely laying the groundwork to declare him a “Never Trumper” in the future.

Trump later repeated “I WANT NOTHING!”

As Law&Crime previously reported, Trump in October claimed that Sondland was a “really good man and great American” who he didn’t want to testify before a “compromised kangaroo court.”

….to see. Importantly, Ambassador Sondland’s tweet, which few report, stated, “I believe you are incorrect about President Trump’s intentions. The President has been crystal clear: no quid pro quo’s of any kind.” That says it ALL!

Sondland, who had no previous diplomatic or foreign service experience prior to being named ambassador to the EU, donated $1 million to President Trump’s inauguration fund to secure tickets to the ceremony.

Sondland testified on Wednesday afternoon that he spoke to the president approximately 20 times, though he couldn’t be sure because the State Department would not give him access to his records. When the president’s comments about him came up, Sondland responded by saying, “Hey, easy come, easy go.”

Sondland, who gave $1 million to Trump’s inauguration to get in good with the new president, reax to Trump now saying he barely knows him:
“Hey, easy come, easy go.”