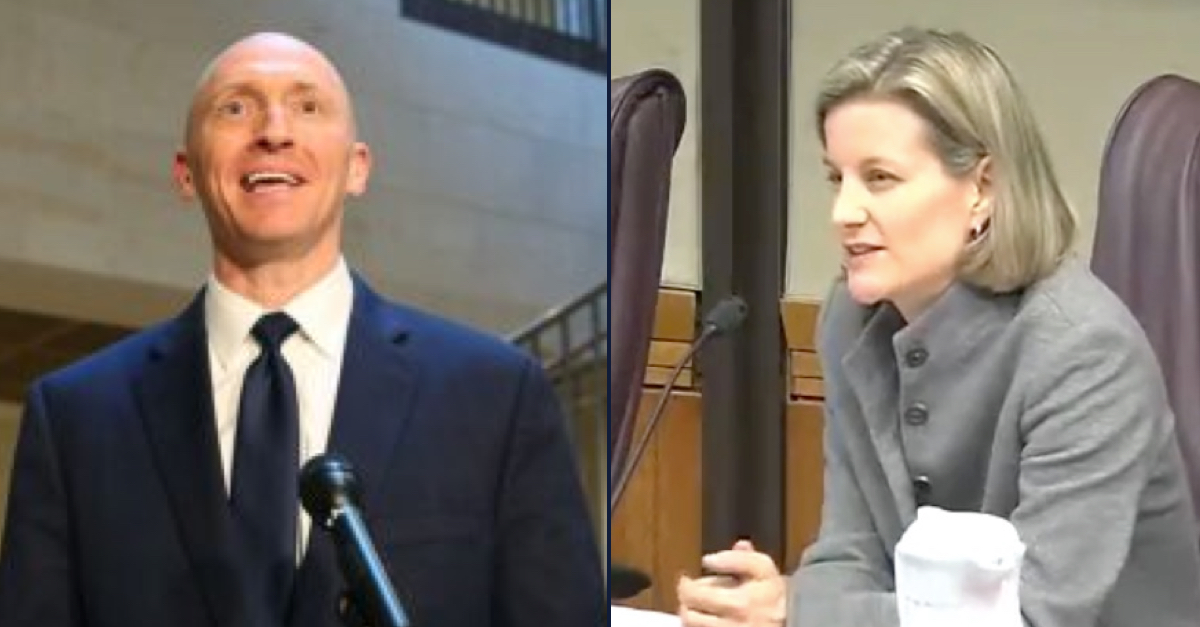 The decision comes in a 54-page memorandum opinion and order from Donald Trump-appointed U.S. District Judge Dabney Friedrich, which recounts the FBI’s false statements and omissions in seeking warrants on Page.

Chief among those efforts cited by the court are the actions of then-FBI lawyer Kevin Clinesmith, who later admitted to forging the original FISA warrant application by lying about Page’s prior work as a source for the CIA.

Summarizing the allegations of the lawsuit, the ruling says Somma “misled and withheld information from DOJ attorneys regarding Page’s status as a CIA operational contact” and kept lawyers in the dark about Christopher Steele‘s “political bias and funding source.” The judge quotes the appraisal of the Office of Inspector General that Somma was “primarily responsible for some of the most significant errors and omissions in the FISA applications.”

The crux of the rationale used to dismiss Page’s lawsuit relies on a gap the court found in the FISA law’s redress subsections.

“[T]hat Congress allowed suit against only those who conduct unauthorized surveillance, and not those who at the application stage mislead the FISC to approve that surveillance—may seem odd,” Friedrich writes. “But it is not so ‘absurd when considered in the particular statutory context,’ as the Court must.”

The judge goes on to write that FISA is a law that was passed “to counter the abuses of warrantless surveillance” but that Congress, when it passed the law, did not anticipate any kind of relief for surveillance conducted with a warrant that was falsified – as happened, on several different occasions, here.

“This historical context helps explain why [one of the FISA sections under which Page sued] applies to agents who conduct unauthorized surveillance—typically, that means without a court order—rather than those who help obtain faulty warrants,” the court explains. “This gap in coverage seems evident now, but it likely was not in 1978.”

The court insists this is a matter only Congress can rectify:

Page faces at least three statutory roadblocks. First, Congress has not created a private right of action against those who prepare false or misleading FISA applications. Both the plain language and the structure of FISA make clear that civil liability under 50 U.S.C. § 1810 attaches only to those who conduct or perform electronic surveillance. Second, Congress has not provided for damages claims against federal officers for constitutional violations stemming from unlawful electronic surveillance in the national security context. And third, Congress has not waived the United States’s sovereign immunity for this kind of claim.

“When it comes to Page’s core claim—that the defendants misled the FISC to obtain surveillance warrants without probable cause—the Court cannot create a cause of action that Congress did not enact,” the opinion goes on.

The court also repeatedly says Page’s claims against the individual defendants don’t actually amount to allegations that any of the headline-generating names were actually the ones surveilling him.

The claims against Comey, McCabe, Strzok, and Lisa Page are given particularly short shrift.

“Absent from the complaint is any claim that these four defendants participated in drafting or substantively reviewing the faulty applications themselves, let alone that they performed the FISA surveillance and acquired Page’s communications,” the opinion says.

“[H]is FISA claim fails for two reasons: §1810 does not allow for aiding and abetting liability, and the phrase ‘engage in electronic surveillance’ does not cover any of the defendants’ alleged actions,” Friedrich sums up. “Page does not allege that any of the individual defendants, including the unknown John Doe defendants and those most responsible for the applications’ critical errors, took part in obtaining the surveillance information, either by setting up the devices or gathering or listening to Page’s communications.”

The only recourse for Page and others similarly situated, the court says, is suing agents who actually “conduct the search” without probable cause, but only “if the agents act intentionally.”

Additionally, Friedrich notes, if the government seeks to use unlawfully-obtained FISA evidence in a criminal trial, an aggrieved party can file a motion “to suppress such evidence on the grounds that it was unlawfully acquired.”