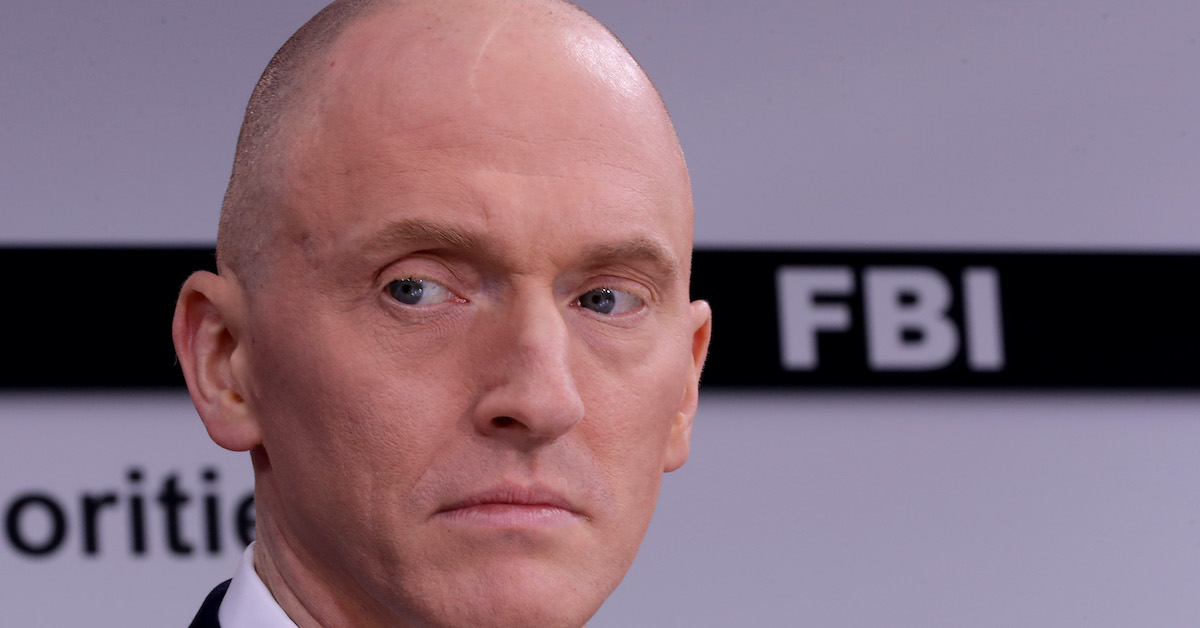 Global Natural Gas Ventures founder Carter Page participates in a discussion on ‘politicization of DOJ and the intelligence community in their efforts to undermine the president’ hosted by Judicial Watch at the One America News studios on Capitol Hill May 29, 2019 in Washington, D.C.

A judge on the U.S. Foreign Intelligence Surveillance Court (FISC) ordered the Federal Bureau of Investigation to identify all cases that former FBI Office of General Counsel (OGC) attorney Kevin Clinesmith worked on and to say whether Clinesmith had been referred to the “appropriate bar association(s) for investigation or possible disciplinary action.”

The ordered was entered on Dec. 5 but released on Friday.

Clinesmith, in case you missed it somehow, has been identified as the lawyer ousted from the FBI after it was alleged that he altered an email used in the renewal of an application for surveilling former Trump campaign adviser Carter Page. The alleged misconduct headlined the numerous “disturbing” FBI errors as documented in Department of Justice Inspector General Michael Horowitz’s report. Horowitz’s work in this area, which appears far from over, also resulted in a criminal referral against Clinesmith:

The F.B.I.’s omission of Mr. Page’s contacts with the C.I.A. relates to the criminal referral that Mr. Horowitz made about an F.B.I. lawyer assigned to assist the Russia investigation team. He found that the lawyer, whom people familiar with the inquiry have identified as Kevin Clinesmith, altered an email from the C.I.A. to a colleague during a renewal application. (The report identified neither Mr. Clinesmith nor the C.I.A. by name.)

An F.B.I. official who had to sign an affidavit attesting to the accuracy and completeness of a court filing had specifically asked about any relationship with the C.I.A. Mr. Clinesmith altered the email so that it stated that Mr. Page was “not a source,” contributing to the Justice Department’s failure to discuss his relationship with the C.I.A. in a renewal application.

FISC Judge Rosemary M. Collyer wants to know about every other case Clinesmith touched, and whether he’s under investigation by the bar.

In light of the United States’ obligation to inform the Court of the facts and circumstances relevant to any misstatement or omission of material fact contained in a submission to the Court immediately upon discovery, it is hereby ORDERED that any subsequent notice to the Court concerning additional facts and circumstances reportable under Rule 13(a) that were discovered as a result of the OIG investigation (whether in the form of the full OIG report or a separate Rule 13(a) letter to the Court) be accompanied by an explanation of any delay between the conclusion of the OIG’s investigation and the Court’s receipt of the required reporting.

It is further ORDERED that by written submission on or before December 20, 2019, the United States shall:

(1) Identify all other matters currently or previously before this Court that involved the participation of the FBI OGC attorney whose conduct was described in the Preliminary Letter and Supplement Letter;
(2) Describe any steps taken or to be taken by the Department of Justice or FBI to verify that the United States’ submissions in those matters completely and fully described the material facts and circumstances; and
(3) Advise whether the conduct of the FBI OGC attorney bas been referred to the appropriate bar association(s) for investigation or possible disciplinary action.

You can read the rest of the filing below.