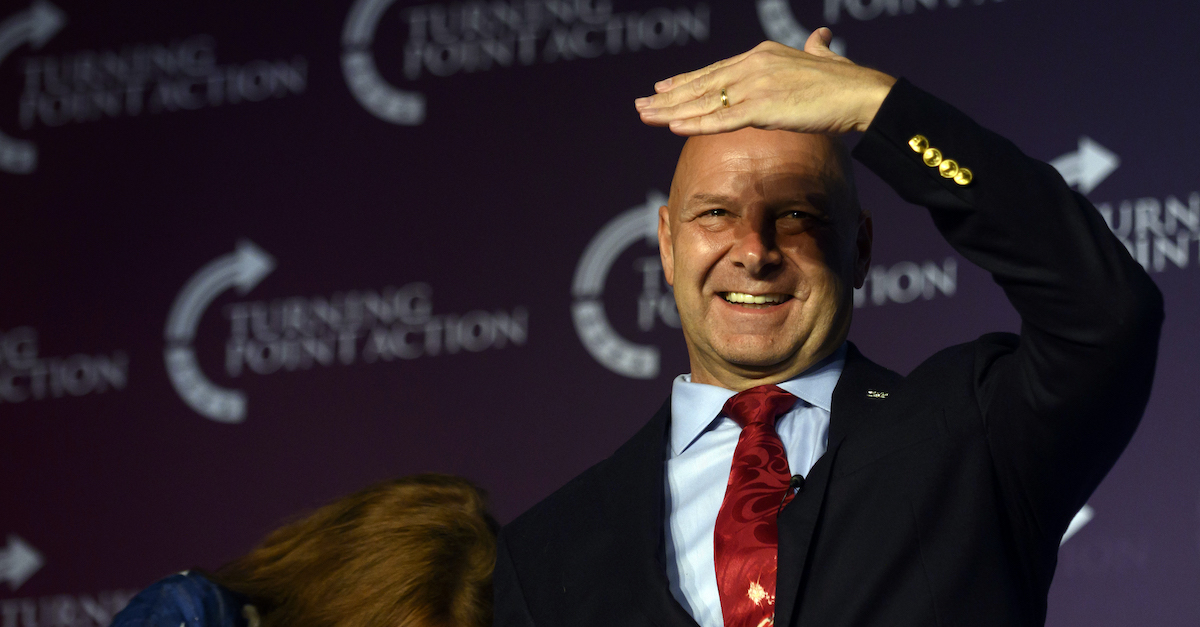 Pennsylvania Republican gubernatorial candidate Doug Mastriano, with his wife Rebecca, speaks to supporters the Unite and Win Rally at the Wyndham Hotel on Aug. 19, 2022 in Pittsburgh, Pennsylvania. (Photo by Jeff Swensen/Getty Images)

Pennsylvania State Sen. Doug Mastriano (R), a Donald Trump loyalist who fought to overturn the 2020 election results, sued the Jan. 6 Committee on Thursday seeking to block his deposition on the grounds that, in his view, its GOP members are only “nominal” Republicans.

Now the Keystone State’s Republican candidate for governor, Mastriano spearheaded multiple efforts to overturn President Joe Biden’s decisive victory in Pennsylvania. The right-wing lawmaker welcomed Rudy Giuliani’s public hearing on the same voter fraud claims that the courts rejected, and he served as the reported point person for a plan to send a slate of alternative electors to Congress.

As recounted in a Senate Judiciary Committee report, Mastriano also spent thousands of dollars from his campaign account to bus people to the January 6 “Save America Rally.”

A running theme in his 21-page complaint filed in the District of D.C. on Thursday is his rejection of the Republican bona fides of the committee’s now-“lame duck” members: Reps. Liz Cheney of Wyoming and Adam Kinzinger of Illinois.

“These two members were chosen by the Democrats because, although nominally members of the Republican party, both follow ideologies that are inconsistent with their own party, instead choosing to pursue the priorities of the Democratic Caucus,” the lawsuit states. “Because no members of the minority conference were included in the panel, nobody was designated as Ranking Minority Member.”

In each paragraph identifying the majority members of the Committee, Mastriano’s lawsuit identifies the representative as “Democratic.” It does not identify Cheney or Kinzinger by their political affiliations in the introductory paragraphs, except to minimize them in passing broadsides.

“Although the Committee does have two members who are nominally members of the Republican party, they are both lame-duck members who were chosen by the Democratic caucus because their ideology aligns more closely with the Majority than the Minority party,” one footnote of the lawsuit reads.

The Jan. 6 Committee took its current form after the GOP caucus rejected a bipartisan alternative, and multiple courts have rejected challenges to its legitimacy based on its composition. But Mastriano’s attorney Timothy Parlatore claims to distinguish the new lawsuit from the failed predecessors.

“Accordingly, the focus of this complaint is not the legitimacy of the Committee,” the lawsuit says, emphasizing the negative in original. “Rather, it is the Committee’s absolute inability to legally compel deposition testimony in compliance with the Regulations for Use of Deposition Authority. A properly appointed Ranking Minority Member is necessary for a witness, such as Plaintiff, to avail himself of the protections afforded to him in the Rules on the Use of Deposition Authority.”

The committee issued its subpoena to Mastriano earlier this year on Feb. 15, seeking information about his conversations with Trump and his role in the alternative electors scheme.

“We understand you participated in these activities based on assertions of voter fraud and other asserted irregularities and based on a stated belief that under the U.S. Constitution the ‘state legislature has the sole authority to direct the manner of selecting delegates to the Electoral College,'” the committee’s subpoena read. “We have an interest in understanding these activities and the theories that motivated them.”

The deposition was slated for Aug. 9, and the night before his scheduled appearance, Mastriano says, Committee Chair Bennie Thompson (D-Miss.) refused to negotiate for a voluntary interview.

Mastriano is listed as one of Trump’s “special guest speakers” at the former president’s upcoming rally in Pennsylvania on Saturday, Sept. 3 at 7 p.m. Eastern Time. He wants a judge to declare that he is not required to sit for the deposition.