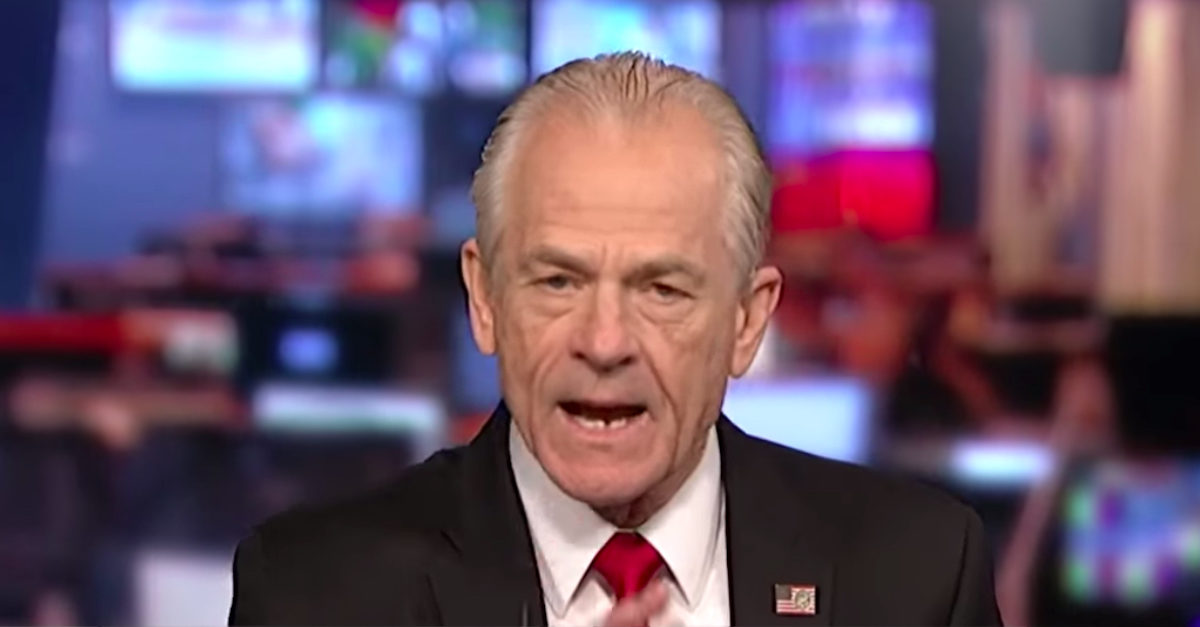 The Office of Special Counsel (OSC) on Monday issued a report concluding that White House advisor Peter Navarro repeatedly violated federal law by engaging in political activity in his official capacity as Assistant to the President and Director of the Office for Trade and Manufacturing Policy.

“OSC’s investigation determined that Dr. Navarro violated the Hatch Act’s prohibition against using his official authority or influence to affect an election by engaging in political activity during official media appearances and on his official Twitter account,” the report stated. “From May 26 through October 19, 2020, during at least six media interviews where he appeared in his official capacity as Assistant to the President and Director of the Office on Trade and Manufacturing Policy, Dr. Navarro repeatedly attacked presidential candidate Joe Biden and/or vice-presidential candidate Kamala Harris. Dr. Navarro often attacked Mr. Biden about his relationship with China and at times accused him of being ‘compromised’ and susceptible to being ‘bought’ by China, even nicknaming him ‘Beijing Biden.’”

The Trump administration has long flouted the Hatch Act’s prohibitions against political activity, with Navarro becoming the fifteenth White House official OSC has cited for violating the law.

But even amongst the serial violators in the administration, Navarro’s conduct appears particularly egregious; the unlawful behavior continued even after he underwent mandatory training on the Hatch Act and OSC informed him that he was under investigation for “disparaging” remarks about Biden and Harris, OSC said.

“Dr. Navarro’s violations of the Hatch Act were knowing and willful,” the report stated. “The White House Counsel’s Office attorney explained that all White House employees receive mandatory ethics training, which includes training on the Hatch Act. And five of the interviews discussed above occurred after OSC sent its July 21, 2020 letter to Dr. Navarro, putting him on notice of the allegations OSC was investigating. Yet Dr. Navarro continued to violate the Hatch Act by attacking presidential candidate Joe Biden during official interviews despite knowing that OSC was investigating him for engaging in that very activity.”

Noah Bookbinder, the executive director of the watchdog group Citizens for Responsibility and Ethics in Washington (CREW), said Navarro’s violations are “rivaled” only by Kellyanne Conway.

“In an administration full of people illegally using their government positions to influence an election, Navarro has been one of the worst,” Bookbinder said in a Monday statement. “Navarro’s blatant violations of the Hatch Act are rivaled only by Kellyanne Conway. This isn’t about not knowing better, it is about a lack of interest in following the law, even when the cost to our democracy is severe.”

CNN legal analyst and former federal prosecutor Elie Honig said the Trump administration had “trashed” the purpose of the law in the first place.

“I know the Hatch Act seems bureaucratic and all, but fundamentally it comes down to this: you can’t use your official position in power to try to gain even more political power,” he wrote. “The Trump administration has trashed that principle.”

I know the Hatch Act seems bureaucratic and all, but fundamentally it comes down to this: you can't use your official position in power to try to gain even more political power.

The Trump administration has trashed that principle. https://t.co/ejo8pDTdWm

Attorney Renato Mariotti, also former federal prosecutor, noted that OSC “took no disciplinary action against Navarro, instead referring the matter to Trump because Navarro is a [non-Senate confirmed] political appointee.”

“[Donald] Trump won’t do anything about it,” he noted.

Yet the special counsel took no disciplinary action against Navarro, instead referring the matter to Trump because Navarro is a political appointee.

Trump won’t do anything about it. https://t.co/psBSFrOOVl