While House Intelligence Committee Chairman Rep. Adam Schiff (D-Calif.) believes the whistleblower complaint is “deeply disturbing” and “credible,” Ranking Member Rep. Devin Nunes (R-Calif.) believes it is just another Steele Dossier. The complaint, which you can read and judge for yourself, plainly alleges that President Donald Trump solicited interference from Ukraine in the 2020 election.

Here are five key takeaways from both the complaint and a letter related to it.

1) Even though the whistleblower heard about the call from other officials, the memo of the call released by the White House confirms that the substance of the complaint was accurate; the characterizations about the substance–and the purpose of the phone call–have become a primary source of disputes.

The complaint says that “multiple White House officials” told the complainant that Trump sought to take actions “to help the President’s 2020 reelection bid,” and sought to “pressure” Zelensky to make that happen. While Trump supporters say there’s no “there” there (i.e. no quid pro quo, no clear pressuring), others say that the context and the sequence of the memo shows Trump engaged in a clear effort to advance his personal interests, one of which was to damage Joe Biden, a 2020 Democratic presidential candidate.

Leaving this aside, the complaint said Trump pushed Zelensky to investigate Biden and his son Hunter Biden; pushed Zelensky to find “the DNC servers”; and said Rudy Giuliani and Attorney General William Barr were the point people to make these things happen.

All of these things, the memo of the phone call shows, were discussed.

2) Officials who relayed the information to the whistleblower were supposedly “deeply disturbed” that White House lawyers were engaging in unusual discussion about how to handle the call — out of fears that they witnessed the president “abus[ing] his office for personal gain.”

Interestingly, it was said to be Ukraine that first acknowledged the existence of the phone call. They summarized the phone call as follows: “Donald Trump expressed his conviction that the new Ukrainian government will be able to quickly improve Ukraine’s image and complete the investigation of corruption cases that have held back cooperation between Ukraine and the United States.”

This seems to be saying that Ukraine and United States cooperation was in a holding pattern because the corruption investigations were not completed. The whistleblower said the only cases White House officials spoke about had to do with the Bidens and the 2016 election.

3) The whistleblower believed an apparent effort to cover up or “lock down” the call was evidence that White House officials “understood the gravity” of what had occurred.

The “set of actions” referred to in the complaint, included White House lawyers atypically “directing” officials remove the “electronic transcript from the computer system” and loading it into a “separate electronic system that is otherwise used to store and handle classified information of an especially sensitive nature.”

One White House official told the whistleblower that this was an “abuse” of the separate electronic system because the call wasn’t sensitive “from a national security perspective.”

4) The appendix to the complaint expounded on the purpose of the above-referenced electronic system, and said it was “not the first time” it was used to bury a politically damaging presidential transcript:

This is a standalone system reserved for codeword-level intelligence information, such as covert action. According to the information I received from White House officials, some officials voice concerns internally internally that this would be an abuse of the system and was not with the responsibilities of the Directorate for Intelligence Programs. According to White House officials I spoke with, this was “not the first time” under this Administration that a Presidential transcript was placed into this codeword-level system solely for the purpose of protecting politically sensitive–rather than national security sensitive–information.

5) A Trump-appointed Inspector General of the Intelligence Community received this complaint and determined that it was “urgent” and “credible.”

IGIC Michael Atkinson relayed in a letter to Acting DNI Joseph Maguire that, in his judgment, the complaint constituted an “urgent concern” — or a “serious or flagrant problem, abuse, violation of law or Executive order, or deficiency relating to the funding, administration, or operation of an intelligence activity within the responsibility and authority of the Director of National Intelligence involving classified information.”

In this case, Atkinson said, the alleged abuse was the president soliciting foreign interference in the 2020 election. 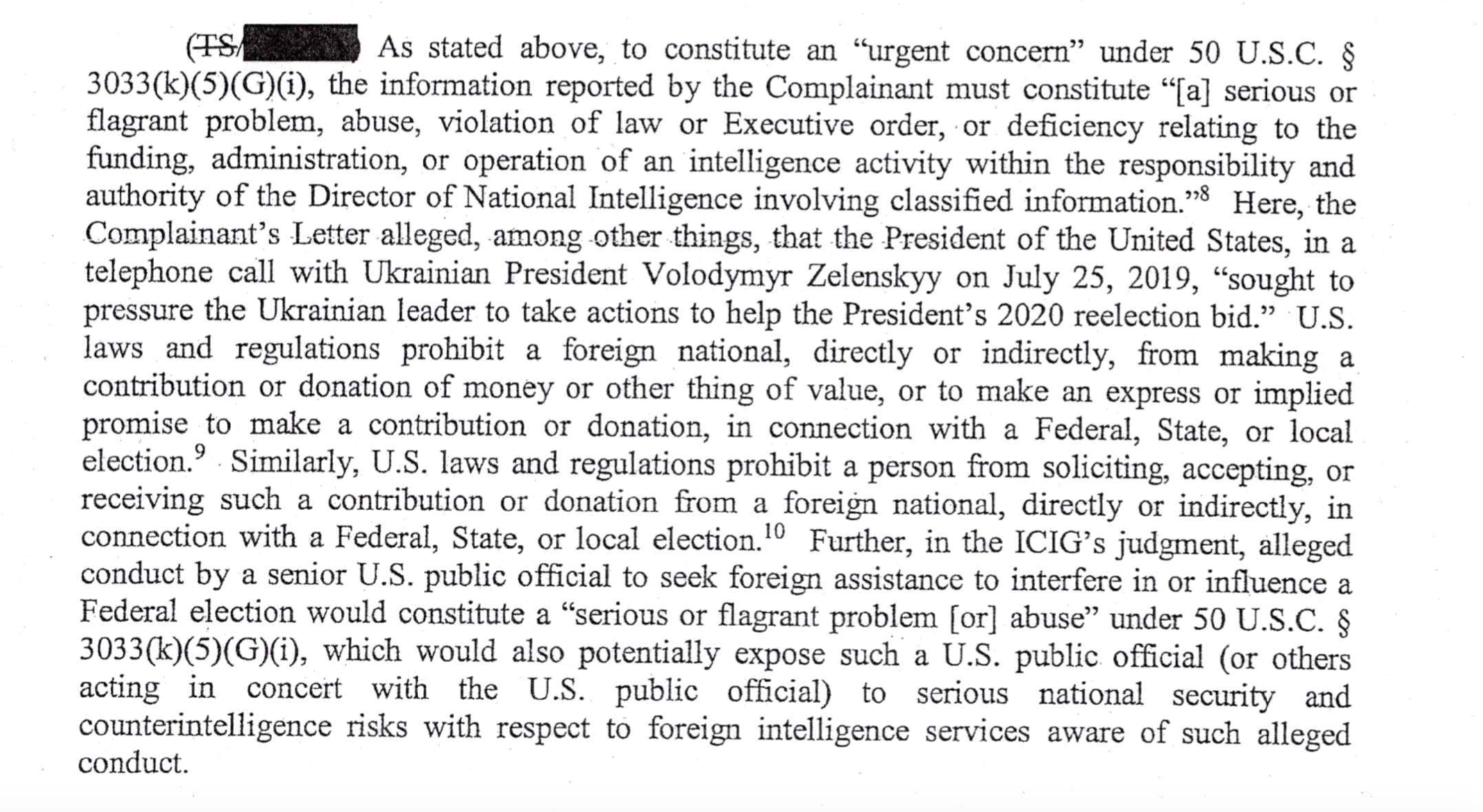 It should be noted that Atkinson made criminal referrals to the Department of Justice of a possible violation of campaign finance law, but AG Barr’s DOJ declined to pursue this. Legal experts have also commented on the DOJ’s Office of Legal Counsel’s (OLC) controversial opinion advising Acting DNI Maguire to withhold the whistleblower complaint from Congress. The OLC’s legal reasoning was deemed “remarkably thin.”

Whistleblower Complaint by Law&Crime on Scribd