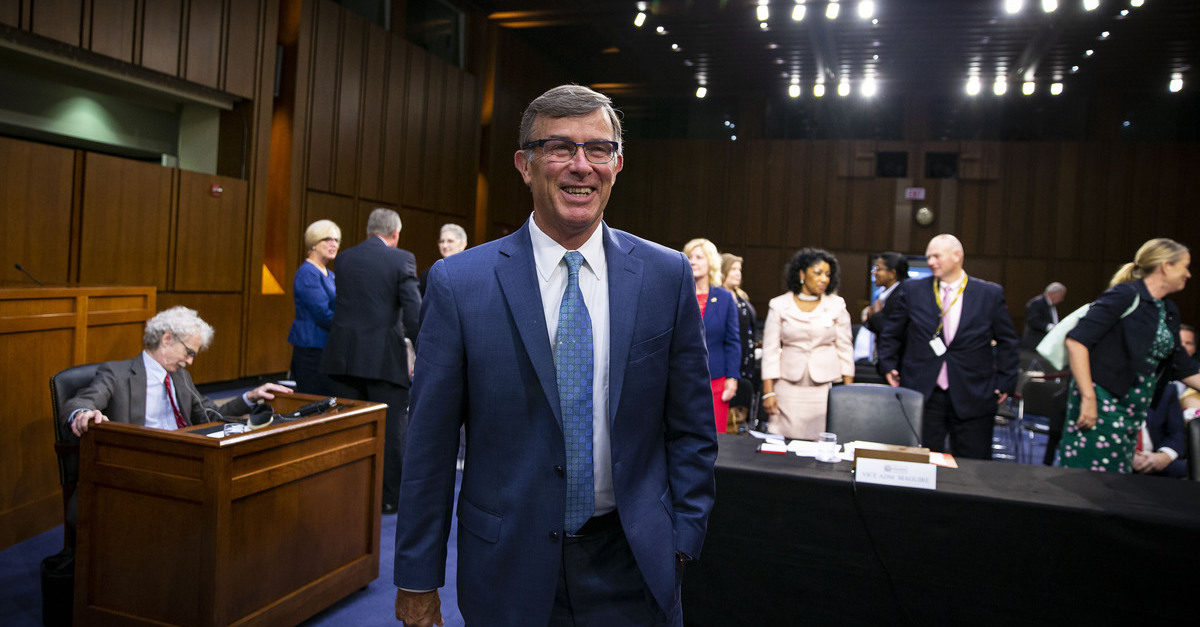 WASHINGTON, DC – JULY 25: Retired Vice Adm. Joseph Maguire after testifying during a Senate Intelligence Committee hearing to be confirmed as the director of the National Counterterrorism Center, on Capitol Hill, on July 25, 2018 in Washington, DC.

The Department of Justice’s Office of Legal Counsel on Wednesday released the controversial opinion used by Acting Director of National Intelligence (DNI) to withhold from Congress a whistleblower complaint pertaining to President Donald Trump’s communication with a foreign government. The complaint had been reviewed by the Intelligence Community Inspector General (ICIG or IG) and marked as a matter of “urgent concern,” meaning that the DNI was required by law to forward it to congressional intelligence committees.

In reliance on the OLC’s newfangled legal reasoning, however, Acting DNI Joseph Maguire re-reviewed the complaint and nullified the IG’s “urgent concern” designation (it seems now, though, that Maguire has some serious concerns of his own). Professor Steve Vladeck of the University of Texas School of Law was particularly struck by the OLC’s unprecedented claims, calling the explanation “remarkably thin.”

Vladeck, who specializes in federal jurisdiction, constitutional law, and national security law, analyzes the primary steps of the opinion, beginning with a succinct summarization of the OLC’s legal reasoning.

“In a nutshell, OLC’s argument is that, on the merits, the underlying complaint doesn’t satisfy the substantive criteria for an ‘urgent concern’ under the statute,” he wrote. “The problem is that the statute expressly leaves that call to the Inspector General, and not the (Acting) DNI.”

Upon receipt of a transmittal from the Inspector General under subparagraph (B), the Director shall, within 7 calendar days of such receipt, forward such transmittal to the congressional intelligence committees, together with any comments the Director considers appropriate.

(Note: when appearing in a statute or other legal document, the term “shall” is generally accepted as a mandatory command, depending on context.)

Based on the language therein, Vladeck explained that there is simply no reasonable statutory interpretation that would permit the DNI to invalidate the IG’s “urgent concern” classification, asserting that the authority was created out of whole cloth.

“Once the IG finds that the report is credible (whether he is right or wrong), the statute imposes a mandatory obligation on the (Acting) DNI to transmit the report and the IG’s findings to the congressional intelligence committees. This language is not remotely ambiguous,” he continued.

Vladeck then rebutted the contention that the DNI has the authority to amend the IG’s initial classification.

“OLC’s claim is that the IG’s determination isn’t just voidable, but void, if the (Acting) DNI disagrees on the merits. Not only is there no support in the text for this, but there’s evidence to the contrary; the DNI is allowed to provide ‘any comments’ he ‘considers appropriate,’” he wrote, adding, “The text settles this beyond peradventure.”

After establishing the plain meaning of the statute, Vladeck then dispelled the notion that any alternative conclusion could be drawn without rendering the statute toothless.

“But even if it didn’t, the purpose of the statute is equally clear; it wouldn’t make sense to allow political leaders of the intelligence community to be able to suppress whistleblower complaints that could very well be about them,” he said.

Attorney Max Kennerly expressed a similar sentiment with regard to the OLC’s legal reasoning, while also pointing out that the released memo had been at least partially altered from its original form.

“OLC’s reasoning is terrible,” he tweeted in response to Vladeck. “Moreover, the memo is fake: OLC ‘changed the prior version to avoid references to certain details that remain classified.’ This isn’t the memo stopping the ICIG from giving the complaint to Congress. It’s just disinformation from OLC.”