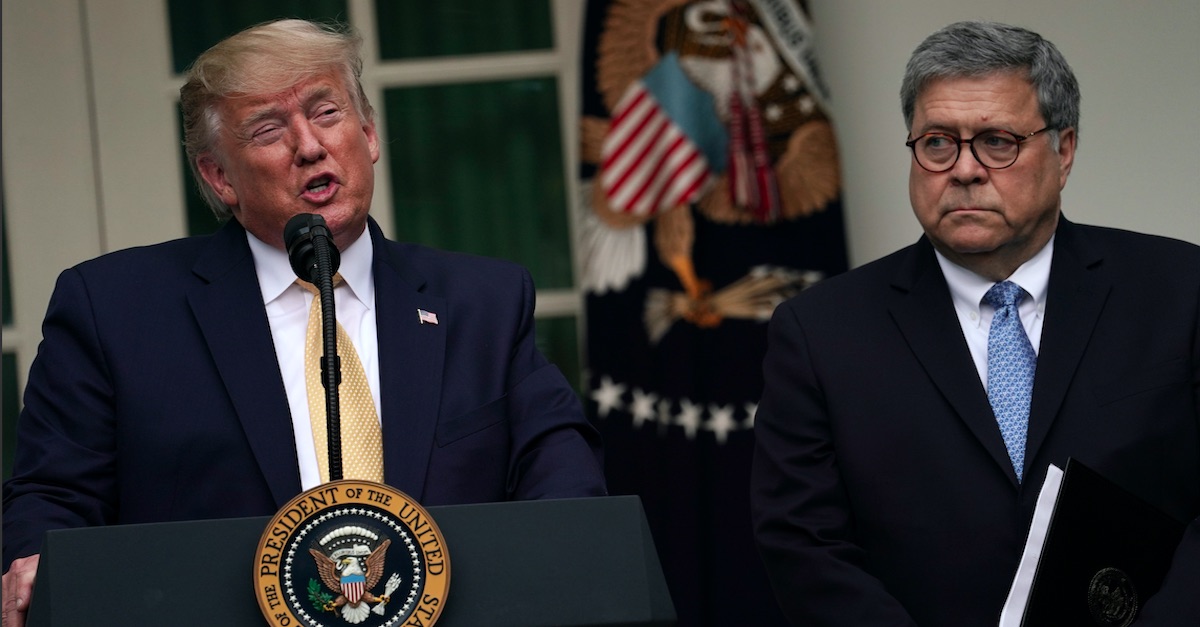 It’s Thursday morning and the whistleblower complaint has been released. As has the Intelligence Community Inspector General’s letter about said complaint. Acting Director of National Intelligence Joseph Maguire is also testifying before the House Permanent Select Committee on Intelligence.

As Ray Arnold might have said in an alternate–and decidedly less scientifically advanced–dimension: “Hold on to your briefs.” Here’s how several legal experts took Thursday’s onslaught of news.

Former assistant U.S. Attorney Renato Mariotti “The first paragraph of the whistleblower complaint alleges that ‘Attorney General Barr appears to be involved’ in the scheme outlined in the complaint,” he tweeted. “Yet he’s not recused?”

As Law&Crime previously reported, legal experts howled at the fact that Barr was mentioned by Trump as Ukrainian President Volodymyr Zelensky’s primary point person to help facilitate the requested corruption inquiry into Joe and Hunter Biden.

Mariotti also took note of an ancillary allegation buried deep within the whistleblower complaint: that “this was ‘not the first time‘ under [the Trump] Administration that a Presidential transcript was placed into” a “standalone computer system reserved for codeword-level intelligence information.”

“What else did the White House hide by placing it onto a computer system for classified documents?” Mariotti asked. “The abuse of that system to aid Trump politically should be part of the House’s [impeachment] investigation.”

The alleged abuse of that computer system appears likely to be a sticking point as the House’s inquiry continues.

Elizabeth de la Vega, a former federal prosecutor who spent 21 years as a member of the Organized Crime Strike Force and as chief of the San Jose branch of the U.S. Attorney’s Office for the Northern District of California, earlier questioned the White House’s decision to slot the transcript into the system typically reserved for documents relating to intelligence activities.

“It was an obvious misuse of the classification system that may prove to have the unintended consequence of destroying their own argument for not affording the whistleblower protection of the statute,” she wrote. “They treated the call as being highly sensitive intel information.”

Some caution is necessary here. Quite a lot of potential damage and heartache for the White House–and the Republican Party writ large; which so far has been more or less steadfast with Trump on this story–hinges upon whether the whistleblower’s accusation that Trump repeatedly abused the sensitive classification is actually true.

Those facts aren’t all the way in yet, but CNN legal analyst Elie Honig noted one fact which speaks to the whistleblower’s overall reliability:

Here’s one way we know the whistleblower is credible: his/her account of the July 25 call is spot-on.

This scandal wouldn’t be operating in the proper historical context without specific allusions to the destruction of Richard Nixon‘s presidency. And, on that front, Harvard Law Professor Laurence Tribe is more than happy to oblige.

Once again returning to Barr’s alleged culpability, Tribe likened the two-time attorney general to a key player from Watergate–one who was found guilty of perjury, obstruction of justice and conspiracy.

“The massive White House coverup of Trump’s abuse of power vis-a-vis Ukraine & Biden, including evidence concealment, is now clearly documented,” he tweeted after the complaint was released. “Bill Barr is up to his eyebrows in the criminal conspiracy. He’s Trump’s John Mitchell. Mitchell ended up in prison. It’s all unraveling.”

And lest the fandom of former special counsel Robert Mueller feel a bit slighted by all this late-coming cloak-and-dagger drag-down on the Trump presidency: there’s apparently a Paul Manafort connection here as well.

Writing in The New York Review of Books, Murray Waas reports Trump’s “Ukrainian initiative appears to have begun in service of formulating a rationale by which the president could pardon Manafort, as part of an effort to undermine the special counsel’s investigation.”

The “[w]histleblower [c]omplaint must be read in conjunction with [Waas’ story],” the former federal prosecutor tweeted. “Trump/Giuliani’s Ukraine machinations appear to be part of an effort to pardon Manafort coordinated with Manafort’s attorneys! Dates in this story must be integrated [with] dates in complaint.”