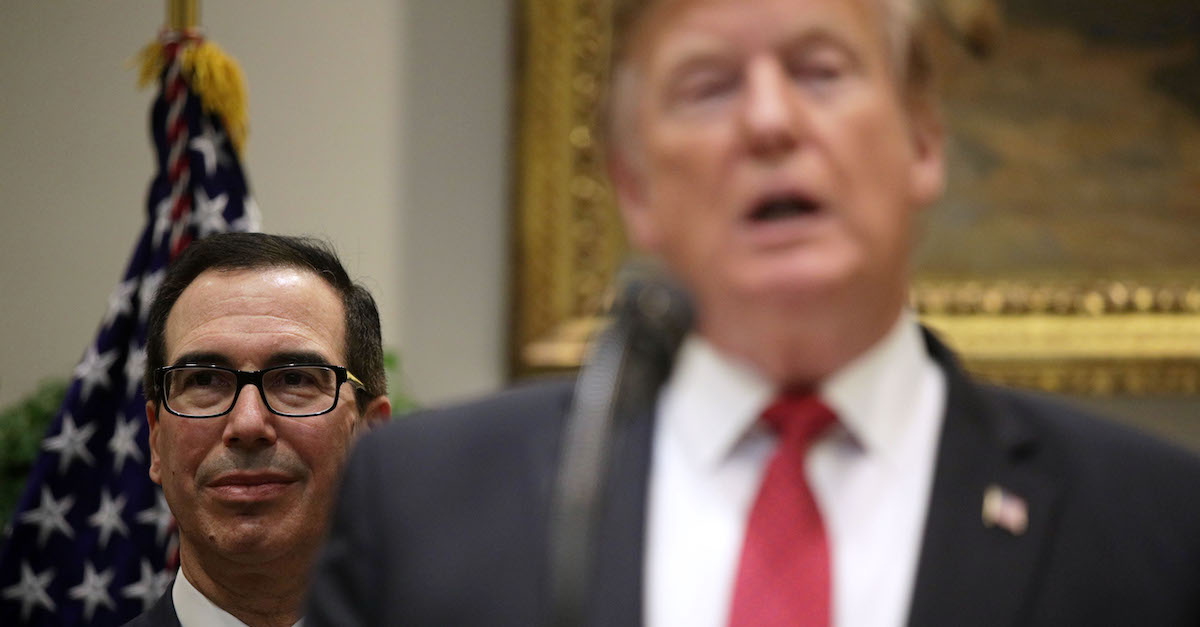 U.S. Treasury Secretary Steven Mnuchin has twice denied Democrats’ demands to release President Donald Trump‘s tax returns, saying both times that the House Ways and Means Committee chairman lacked a “legitimate legislative purpose.” A “confidential IRS draft memo” first published Tuesday by the Washington Post said, however, that such release of the tax returns was “mandatory” — unless executive privilege was invoked (it wasn’t).

In reading this, you see neither the words “legitimate legislative purpose” nor “executive privilege.” That’s because these are constitutional requirements or exceptions, not statutory ones.

The main claim raised by the Post‘s reporting:

The 10-page document says the law “does not allow the Secretary to exercise discretion in disclosing the information provided the statutory conditions are met” and directly rejects the reason that Mnuchin has cited for witholding the information.

“[T]he Secretary’s obligation to disclose return and return information would not be affected by the failure of a tax writing committee … to state a reason for the request,” it says. It adds that the “only basis the agency’s refusal to comply with a committee’s subpoena would be the invocation of the doctrine of executive privilege.”

For this reason, the publication of the memo sent shockwaves across social media, with some decrying the violation of the rule of law and others opining that the courts would agree that Mnuchin has to release Trump’s tax returns.

Oops, someone must have let them read the statute. https://t.co/THQii3QqYD

That is what any court examining the issue would conclude. https://t.co/CbLauda4oF

Tax law professors, however, are commenting on the implications in a more measured way.

Daniel Hemel, a tax-focused law professor at the University of Chicago, reviewed the document for the Post and concluded that there was a divide between career IRS staffers and Trump’s appointees (Mnuchin) on the law.

As Hemel indicated, this was an “interpretation.”

“In legal terms, a draft memo like this has zero value,” Grewal said. “But as a practical matter, it shockingly reveals that different persons may interpret the law differently.”

Grewal opined separately that he believes the real story here is that “(apparently) an IRS employee would leak such a thing.”

“As for the outline of authorities described in the memo, I don’t think it will change anyone’s mind and it would be bizarre for any court to give it weight,” he said.

One anonymous Treasury Department official told the Post that this issue in particular had been discussed well before Democrats ever demanded Trump’s tax returns.

“The decision has been made,” the anonymous individual simplified the situation. “Now it’s up to us to try to justify it.”

Either way, the author of the draft memo and Mnuchin both argue that there is a way to resist Democrats’ demands.

House Ways and Means Committee Chairman Richard Neal (D-Mass.) previously said that the Committee was “considering legislative proposals and conducting oversight related to our Federal tax laws, including, but not limited to, the extent to which the IRS audits and enforces the Federal tax laws against a President.”

This was the main justification for the “legitimate legislative purpose.”

“Under the internal Revenue Manual, individual income tax returns of a President are subject to mandatory examination, but this practice is IRS policy and not codified in the Federal tax laws,” Neal continued. “It is necessary for the Committee to determine the scope of any such examination and whether it includes a review of underlying business activities required to be reported on the individual income tax return.”

Leaving this whole argument aside, as Law&Crime reported before, even if Democrats fail at the federal level to obtain Trump’s tax returns, there is still a back-up plan in the works. New York lawmakers have voted on a bill geared towards making Trump’s state tax returns available for viewing by members of Congress, despite U.S. Treasury denials.